Mike Ilitch made fans proud to root for Detroit again 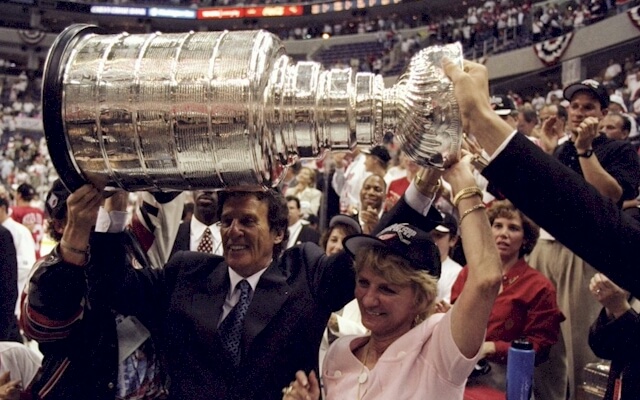 Mike and Marian Ilitch hoist the Stanley Cup after the Detroit Red Wings won the title in 1998.

Detroit has lost the best sports fan the town ever had.

Mike Ilitch, 87, died on Friday after a lifelong love affair with Detroit and the teams that represent this blue collar city. He leaves behind a sports legacy in this city that will impossible to match.

Ilitch is best known for three character traits that defined his career: hard work, loyalty, and pride. He started from modest beginnings to build himself into one of the most successful owners in sports history, guiding two teams to success. He was fiercely loyal to his employees, consistently providing everything he could to help them be successful, and he was immensely proud of his family, his business interests, and the city. There was never a bigger champion of Detroit than Mike Ilitch.

Ilitch was a rarity among the usual playboy club of sports owners. He wasn’t a billionaire who bought himself a shiny toy to play with after he made it big. He was a self-made man whose father was a tool-and-dye maker and a union member. Ilitch didn’t start out with inherited money. He graduated from Detroit’s Cooley High School where he was a star athlete despite his small size and enlisted in the United States Marine Corps after graduation, serving four years.

He was a good enough ballplayer that the Detroit Tigers dangled $3,000 in front of him in 1952. So he eagerly changed from his Marine Corps uniform into baseball flannels. Ilitch played four seasons in the minor leagues for three different organizations as a light-hitting second baseman. He was scrappy but not big league material. A knee injury helped him realize his dream of making the major leagues was not going to happen. He forged ahead as a businessman instead.

In 1959 Ilitch started his first pizza shop with $8,000 from his savings as a minor league baseball player. With his wife Marian, a lifelong business partner, he opened the first Little Caesars in Garden City, MI. The name came from Marian, who considered Mike her “little caesar.” Within a decade the couple had dozens of stores in Michigan. A decade later they were sprinkled across the country. By 1979 their “Pizza! Pizza!” advertising campaign had vaulted Little Caesars into position as one of the most popular and successful pizza chains in the world.

The pizza empire soon funded Mike’s return to professional sports, this time as the man in charge. He owned the Detroit Caesars in the late 1970s, a professional softball team that featured former Tigers Norm Cash and Jim Northrup. But Ilitch had his eyes on a larger prize: the Tigers.

A fortuitous detour came in 1982 when he had the chance to buy the Red Wings from Bruce Norris for $8 million. The investment turned out to be a wise one. In 2015, Forbes magazine valued the franchise at $600 million, the richest in professional hockey.

The first decision of the Ilitch era that transformed Detroit was at the 1983 NHL draft, his first as owner of the Wings. General manager Jim Devellano was smitten with local Detroiter Pat Lafontaine and wanted to pick him in the first round. But after Lafontaine was selected by the Islanders, Ilitch advised Devellano to take Steve Yzerman, an 18-year old from Ontario. Yzerman played 22 seasons for the Ilitches, leading the team to three Stanley Cup titles as team captain.

In 1992, Ilitch added the Tigers to his sports empire and quickly learned that being a baseball owner was a lot different than owning a hockey team. It was the culmination of a dream. Less than a decade earlier Ilitch had been passed over when longtime Tiger owner John Fetzer sold the team to Tom Monaghan. It stung Ilitch that he hadn’t been offered a chance. Fetzer had chosen the wrong pizza mogul.

“I look at this team as a long-term asset, and I’m not going to take a back seat to anybody in the league,” he said when he purchased the Tigers, his true love.

“For me, one sports team would have been enough,” Marian Ilitch said, “but Mike wanted it, and I’m happy with it.”

Ilitch brought renewed enthusiasm and stability to the Tigers after the debacle that saw Bo Schembechler elevated to president under previous owner Monaghan. The previous owner had famously alienated fans when he antagonized star players, daring them to leave and criticizing them for pursuing bigger contracts. In contrast, Ilitch made it his goal to “spend with the big boys” and compete with larger market teams.

Ilitch guided the Tigers through their transition from Tiger Stadium to a new ballpark in downtown Detroit, across the street from the Fox Theater, which he also owned and renovated for the benefit of the city. The move away from Tiger Stadium was unpopular with many at the time, but Ilitch insisted that a new stadium was needed to boost revenues and make the team competitive again. Ultimately he was vindicated, as Comerica Park has become a boon for the downtown and the team, which went on to win a pennant in their seventh season there.

Like George Steinbrenner with the Yankees, Ilitch often inserted himself directly into free agent negotiations, using the force of his enthusiastic personality to lure players to Detroit. He shocked the baseball world in 2004 when he signed free agent catcher Ivan Rodriguez, a key ingredient in rebuilding the Tigers. He signed big checks to get Magglio Ordonez, Victor Martinez, Torii Hunter and others into a Detroit uniform. In 2012 he showed how serious he was about winning when he personally went after Prince Fielder and signed him to the largest contract in Detroit sports history after he’d learned that Martinez would be out for the season with an injury. The Tigers won the pennant that year.

Off the field, away from his sports teams, Ilitch was a smart businessman and a philanthropist. He founded the Little Caesars Love Kitchen, a program to feed the poor that was recognized by three presidents for its good work. The Little Caesars Veterans Program helped veterans get funding for business opportunities. There’s much more that he did for the city, too much to list here, but for for example, Mr. Ilitch frequently paid Rosa Parks rent when the civil rights icon was retired in Detroit. A testament to his leadership is that for many years fans have been begging him to buy the Detroit Lions.

Despite being very involved with his teams and infusing his proactive philosophy to push them to succeed, Ilitch was not a headline-seeker. His press conferences were rare, he would show up on the field for celebrations, like he did in 1997, 1998, 2002, and 2008 when the Red Wings won titles. Each time, “Mr. I” hoisted the famous cup. In 2012 he was emotional on the field at Comerica Park when the team celebrated the pennant.

“I want to win a World Series for this city,” manager Jim Leyland said, “but most of all I want to win one for that man.”

Late in his life as it became apparent that time might be running out, his children spoke of how much it would mean to Ilitch if the Tigers were to win a championship.

“[He’s] proud of the Stanley Cups,” Christopher Ilitch said in 2014, “but he’d trade a few of those for one World Series.”

Detroit fans will long remember Mike Ilitch and the way he turned two of their pro sports teams into winners. But more than that, Ilitch was the unofficial leader of this city for decades, restoring Detroit’s swagger and making fans proud to wear a cap with a “D” on it again.