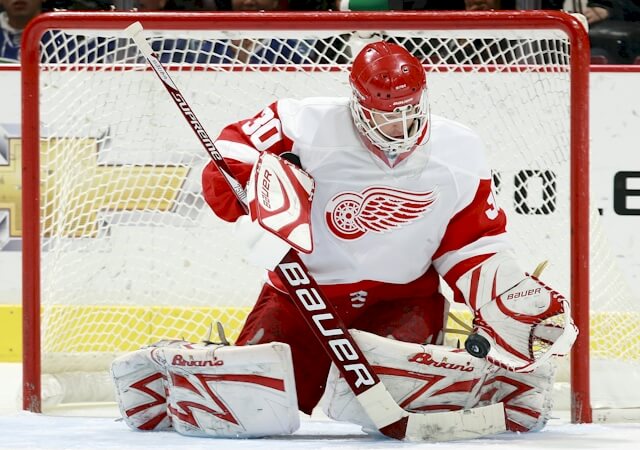 Chris Osgood guarded the net for the Detroit Red Wings for 14 seasons.

Up until the spring of 1985, nobody in the National Hockey League had ever seen a water bottle on top of a goalie’s net. Then, in that year’s Stanley Cup Finals between Philadelphia and Edmonton, Flyers netminder Bob Froese—tired of playing entire periods without being able to skate over to the bench for a water break—decided to keep a bottle at hand. Using a piece of velcro, he strapped it to the top of his cage.

The Oilers argued, to no avail. The referee decided that as long as the bottle was securely fastened, it posed no threat. “What are they gonna want up there next?” snorted Edmonton coach Glen Sather. “A bucket of chicken?”

Aside from an occasional minor controversy like “water-bottle-gate,” not much thought is given to goalie nets. And yet, like every other piece of hockey equipment, these yawning rectangles of mesh and galvanized steel have their own unique history.

While various forms of ice hockey have been played for centuries, nets are a relatively recent development. Up until the 1890s, a goal area was marked simply by jamming two sticks into the ice. An umpire stood directly behind, ready to wave his handkerchief to signal a score whenever the puck crossed the goal line.

This quaint method had its drawbacks. “The puck travels at such a tremendous velocity that it is usually simply a matter of impossibility to tell whether or not it has passed between the goal posts in its flight from the players’ sticks to the end of the rink,” one newspaper noted. “Umpires are but human, and no matter how attentively they may be watching the game, they cannot always give the correct decision.”

Games continued to be marred by constant bickering over whether a goal had been scored or not. Then, in the mid-1890s, some hockey teams borrowed an idea from another cold-weather sport: ice polo. Two sections of gas pipe were placed in the ice as uprights, connected by a third piece of pipe placed horizontally across the top. This crossbar added stability. Netting was added as a way of capturing the puck after it flew past the goalie.

Observers were divided over the newfangled contraption. The Montreal Gazette complained that it made goalies into cigar-store Indians. But the Brooklyn Eagle predicted nets would revolutionize the game. And they did. Pretty soon, anyone who could handle a hammer was slapping together a few 2-by-4’s and some baling wire.

The advent of professional hockey helped standardize nets. Percy LeSeur of the Ottawa Silver Seven designed the first official net for the National Hockey Association (precursor to the NHL). LeSeur’s net was constructed of steel pipe. It was 4 feet high, 6 feet wide, 22 inches deep at the base and 17 inches deep at the top. A rope net was draped across the top and back of the frame and tied in place.

LeSeur’s model was updated in 1928 by Art Ross, a former defenseman who also owned a sporting goods store in Montreal. Ross’s design featured a double semicircle enclosure at the back of the net, which trapped pucks shot from nearly every angle. Pucks often ricocheted out of straight-back nets, so the new design helped cut back on the number of disputed goals.

However, in the mid-1980s the NHL eliminated the double semicircle after a player was seriously injured sliding into the back of the net. The enclosure was returned to its original straight-back design.

At about the same time, the NHL addressed the issue of safely anchoring the net to the ice. Because of the steel pipes holding them in place, they didn’t give very easily. Over the years, several players were severely injured rushing pell-mell into the unforgiving backstops. Gordie Howe, for example, once tore open his forehead after crashing into the Montreal net.

When nets did give way, however, there still was the potential for catastrophe. While playing for Hartford in 1980, Howe’s son, Mark, actually was impaled on the center spike after crashing into the net at high speed. It was one of the worst accidents in NHL history, with Howe losing three pints of blood on the ice before he could be removed. As bad as it was, it could have been worse, as the pipe just narrowly missed severing his spinal column.

As a result of this gory accident, the league redesigned its nets. In 1986, the NHL changed over to a magnetized anchoring system. This may have saved Steve Yzerman’s career. In 1988, shortly after scoring his 50th goal of the season, the Wings’ captain injured his knee sliding heavily into the Buffalo net. He missed the rest of the regular season, but the damage could have been much greater if the net had not easily dislodged upon impact.

Of course, players quickly learned to take advantage of the new anchoring system. Forwards crashed the nets like never before, while defenders weren’t above lifting the net off its magnets—thus stopping play—when the action got a little too hot around the crease.

The NHL also learned. In 1991, the league got rid of the magnets and adopted the current anchoring system. Now sections of flexible plastic pipe, which bend but do not break, are inserted into the ice surface and hold the goal posts in place. At the same time, the league decided to color the goalie’s crease a light blue. Today, despite the tweaks and fine-tuning, the net that Petr Mrazek and Jimmy Howard defend at The Joe is essentially the same their predecessors did at Olympia Stadium in the 1920s.

One reply on “Net gains: The Evolution of hockey nets“