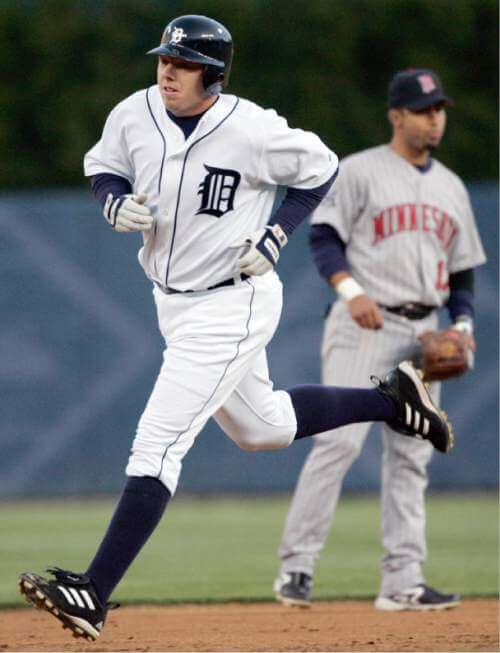 In April of 2006 for the Detroit Tigers, Chris Shelton had one of the best months with the bat in baseball history.

COMSTOCK PARK — Whether you knew him as “Red Pop,” “Big Red,” or “Orange Crush,” Chris Shelton is fondly remembered by Detroit Tigers fans.

Despite not having a long major league career with the Tigers, Shelton had a two-week stretch that made him impossible to forget — and it kicked off a season that Tiger fans won’t forget, either.

It was 2006 and Shelton made the big league team and was the opening day starter at first base after Carlos Pena had moved on to Boston.

Shelton batted sixth on opening day against Kansas City and singled in his first at bat. It was the start of a torrid stretch that has been matched by very few in baseball history. His second at bat was a home run — and so was his third.

He went 3-for-5 in the second game of the season before the Tigers headed to Texas. Shelton slugged two home runs in the series opener, then hit another in the next game.

Five home runs in the first four games had Tiger fans eager to see this new phenomenon. After all, those heroics were all on the road. Shelton and the Tigers hadn’t played at Comerica Park yet and he already had nine RBIs.

The ovation Shelton received in his first at bat in Detroit that season was thunderous. Shelton rewarded the home crowd that week by powering four more home runs. It gave him a total of nine home runs in 13 games, a start not matched by any batter in American League history — not Babe Ruth, Lou Gehrig, Jimmie Foxx, Hank Greenberg, Ted Williams, Mark McGwire, Ken Griffey Jr. or Frank Thomas. In the National League, Mike Schmidt, Larry Walker and Luis Gonzalez have matched Shelton’s feat.

“I am grateful the fans still remember it,” said Shelton, who was Friday’s guest in the West Michigan Whitecaps Tiger Fridays. “It is such a big memory to me. It is nice to know that I was able to put some memories into fans. They will remember that season as much as I will.”

At that point of the season, Shelton was batting .471 and Tiger fans were wondering how long he could possibly keep up his slugging pace.

Not long it turns out.

Shelton hit just two home runs in the next six weeks as his average dropped 200 points. His dip was so dreadful that the Tigers traded for Sean Casey at the deadline — a move that helped spark the team to the pennant.

“It was exciting time for us,” Shelton said. “The way we would win games when we got the chance, it seemed to be someone different every night. I remember a game specifically, it was (Johan) Santana vs. (Justin) Verlander and Vance Wilson hits a home run off of Santana in the seventh inning and we win 2-1.  It really was someone different every night. We grinded through every at bat and we didn’t think we were ever out of a game — and we played like that.”

But with so many players, including the newly acquired Casey, stepping up, Shelton was relegated to the Toledo Mud Hens. He was called back up with the expanded rosters in September but went 4-for-19 with two RBIs. He was left off the postseason roster and forced to watch some of the most exciting moments in Tigers history.

“If I knew was I was doing, I wish I could have bottled it up and just kept doing it,” Shelton said. “Looking back on it on the coaching side of things. I would have to say I was on time and I didn’t miss pitches. As it got later on in the season, I was fighting timing and when I did get a pitch, I wasn’t on time. When I was on time, I seemed to foul the ball off.

“It didn’t sustain and that was tough. I knew realistically that I couldn’t stay on a pace like that. That would have been something very special. I knew it was going to come back a little, but I didn’t want it to come back as far as it did. It was an exciting time.”

The following year, Shelton failed to make the Tigers opening day roster out of spring training and spent a full year in Toledo before being traded to the Texas Rangers. He had 97 at bats that season and 26 more the following year with the Seattle Mariners. The redheaded righthander signed a minor league contract with the New York Mets in 2011 but didn’t make the club.

He returned to Salt Lake City where he is an assistant baseball coach at his high school.

It was a big league career full of tremendous ups and downs, but one that won’t be forgotten by Tiger fans. The summer the Tigers returned to the World Series was the summer of “Red Pop.”