Several former Tigers still playing this October in the playoffs 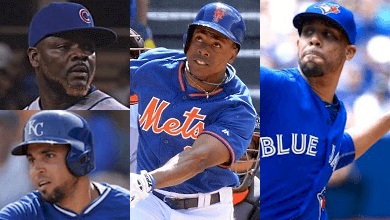 Major League Baseball’s postseason always makes this my favorite time of the year. The games are played with such intensity that it is hard not to get wrapped up in them. I asked an acquaintance the other day which team he liked, and he replied that he didn’t care, because he only pays attention to the Detroit Tigers.

I know some people take that attitude, and that’s fine. But to me it’s still the greatest game, and I’ve always enjoyed October baseball, whether or not the Tigers are in it.

One thing that I do like to do each year, however, is follow what all the former Tigers are doing in the playoffs (if there are any, which is usually the case). I’m not saying I root for them, or that I hope they play badly. But I do like to keep abreast of how they are performing.

It was interesting to see that Prince Fielder once again laid an egg in the American League Division Series for the Texas Rangers. He hit .150 with no home runs, and once again looked silly in a rundown between third base and home plate. Well, at least he finally drove in a run, breaking a ridiculously long postseason RBI drought. I find it mystifying how a player of his talent can keep underperforming postseason after postseason. He has a .189 average in 44 games in his career in the postseason. That’s not just a fluke. That’s awful.

Andrew Miller, another former Tiger, played in the Yankees’ wild card game this year. Unlike Fielder, Miller has had a lot of success in his postseason career (although granted in a much smaller sample size). Going back to last year, he has appeared in six postseason games, pitched 8.1 innings, allowed only one hit, one base on balls, has struck out ten, and hasn’t been scored upon. That’s what I call impressive.

The Pirates, who lost their wild card game, had Joakim Soria on their roster. He got into the game and did very well, striking out three in his one inning. Of course, you may remember he pitched two games for the Tigers in last year’s ALDS and gave up five earned runs in one inning pitched. Sorry to remind you.

In St. Louis, the Cardinals had old Jhonny Peralta, who still has two N’s, one H, and no range. Is this guy really only 33? It seems like he’s been around forever. He batted .143 in the NLDS for the Cards, who were pushed aside by the Cubs.

But those players have all since gone home for the winter. The remaining four teams still have some former Tigers, however, and they’re doozies.

Fernando Rodney is in the postseason, which may come as a shock to many of us here in Detroit. But yes, he’s pitching for the Cubs now, after he stunk his way out of Seattle. He’s been lights-out since arriving in the Windy City, and yes he’s still wearing his hat sideways. Maybe in Chicago he can blame it on the wind.

The Cubs also have Austin Jackson, who’s been a forgettable player since leaving Detroit (maybe Trader Dave knew what he was doing). He’s also been fairly forgettable in the postseason for Chicago so far, going hitless in seven at-bats (including four strikeouts).

Incidentally, with the injury to Addison Russell, the Cubs have just added Quintin (The Clapper) Berry to their roster. He played very briefly for them this season. My favorite Quintin Berry story is one that happened during his last season in the Motor City. My friend and I were at Comerica Park for a day game. We were sitting in the right field section. In the first inning, Berry came to bat. The place was really quiet, and suddenly we heard this deep-throated scream: “WE LOVE YOU QUINTIN BERRYYYYY!” The whole section heard it, and everyone got a chuckle out of it. The guy who belted it out was a big, beefy, wrestler type, sitting with his girlfriend. Later, my friend and I left our seats to get some more ice cream. We walked around a bit, and grabbed some new seats, way over in left field this time. Berry came to bat again, and again we heard the scream: “WE LOVE YOU QUINTIN BERRYYYYY!” I looked a few rows down and to the right, and it was the same guy; he had also moved to our new section.

The Royals have Omar Infante on their roster, but he hasn’t played in the postseason so far because of an oblique strain. That’s a blessing in disguise for Kansas City, because Infante was statistically one of the worst position players in baseball this year. Joba Chamberlain also pitched for K.C. this year, but their fans were spared any further pain and anguish when “The Bearded One” was left off the postseason roster.

The Mets should be intriguing (or frustrating) for Tiger fans to watch, because two of their big stars are Curtis Granderson and Yoenis Cespedes. This is the equivalent of seeing your worst enemy with one of your ex-girlfriends on each arm. Granderson had kind of a comeback season this year, and we all know what Cespedes has been up to. When the Tigers traded him earlier this year, there was some discussion around the water cooler that it was just a temporary loss, and that the Tigers were going to make an effort to re-sign him as a free agent. But now, the Tigers have as much chance of reuniting with Cespedes as I have of finagling a coffee date with Kate Upton.

And finally, in Toronto, the Blue Jays have the great David Price, although his presence is likely offset by another former Tiger, Ezequiel Carrera. Tiger fans will remember Carrera for his famous swan dive in the outfield of a pivotal September game last year. They’ll remember Price as the man who early in the 2015 season kept the Tigers’ starting staff from resembling a complete dumpster fire. Price pitched Game Two of the ALCS on Saturday in Kansas City against the Royals and he looked marvelous until the seventh inning. The former Tiger was hung with a loss which brings his postseason record as a starter to 0-7. That has to be one of the most inexplicable stats in baseball.