The Spring Training Injury That Grounded The Bird 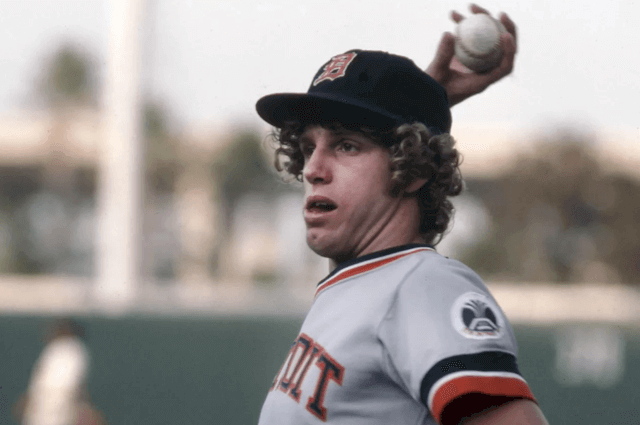 When the Detroit Tigers reported to Lakeland for spring training in February of 1977, spirits were high. It had been several years since the team was surrounded with so much media and attention. But it would be more accurate to say one player was responsible for that attention. The Bird.

Everyone in Lakeland wanted to see The Bird, Mark Fidrych, the talented young pitcher who captivated baseball the previous summer. Fidrych didn’t disappoint, he couldn’t have been more Bird-like if he grew feathers.

In 1976, Fidrych nearly eclipsed the Bicentennial with his antics and performances on the mound. That year he won 19 games and started the All-Star Game, but more importantly he sparked a resurgence for the people of Michigan and their baseball team. With his curly hair, knobby knees, and straight-as-hell fastball, the American League Rookie of the Year was the biggest story in sports. He drew a crowd too: often packing the ballpark whether he was at The Corner in Detroit or on the road. Opposing teams even begged the Tigers to adjust their rotation so Fidrych would pitch against them. Female fans bribed his barber to get locks of his hair. It was Beatlemania zany.

The presence of The Bird lifted the spirits of a team that finished in last place with 102 losses in 1975.

As a non-roster invitee to spring camp in 1976, Fidrych made only $26,000 during his magical rookie season. The Tigers and their opponents drew more than 900,000 in his 29 starts, prompting stingy Detroit general manager Jim Campbell to give The Bird a $34,000 bonus. He wasn’t high-paid, but Mark Fidrych was a mega star.

There was no reason to think 1977 would be different. Fidrych was 22 years old and healthy. He seemed to be the only person who understood the special language of a baseball. Why couldn’t he do it again? Act II commence.

But then fate intervened under the warm Florida sun.

“Mark would goof off in the outfield when he wasn’t pitching,” Staub said. “He had so much energy, so much fuel to burn off, I guess. He didn’t like to sit still. But he didn’t take precaution.”

Early in spring, Staub, as one of the team leaders, sat down with Fidrych to have a chat. His aim was to protect The Bird.

“He didn’t understand what was coming in ’77,” Staub said, “I told him to make sure he made time to get away from [the media] attention.”

His teammate also warned Fidrych about his aggressiveness on the field. He warned The Bird to take care of his body.

On March 21, prior to an exhibition game against the Expos, Fidrych was in the outfield with other pitchers shagging fly balls. He raced to catch a baseball and jumped in the air to complete the snag. When he returned to the ground, he felt a sharp pain in his left knee. He initially thought it was a minor strain, and he even completed his running that afternoon with his teammates. But later, he was examined by a team physician, who advised The Bird to refrain from pitching for a couple days. A week later the pain subsided and Fidrych returned to exercising with the team, but when he quickly jumped up from a stretching exercise, he once again felt the pain in his knee. This time he felt a pop.

After a subsequent examination, team doctors felt he probably had torn cartilage and recommended exploratory surgery, which Fidrych had on March 31. Officials for the team reported that their star pitcher would be unable to pitch for at least six weeks. Which meant he wouldn’t be game-ready until June. The Tigers were forced to start the regular season with their biggest gate-attraction on the sidelines.

The Bird beat the timetable and returned to the Tigers on May 27, when he tossed a complete game against the Mariners on a Friday night in front of more than 44,000 fans at Tiger Stadium. The skinny righthander allowed only two runs, but unfortunately his teammates scored just once. Five days later he got lit up by the Indians for his second loss, but then he reeled off six consecutive victories, each of them a complete game. On June 20, more than 47,000 fans packed into The Corner to see The Bird defeat the mighty Yankees, 2-1. That evening he was strutting on the field, talking to the baseball, and making The Bronx Bombers miss. The Bird was back.

Until he wasn’t back. Less than a week before the All-Star Game, for which Fidrych was once again chosen, The Bird climbed the mound to face the Blue Jays at Tiger Stadium. He was facing his third batter in the first inning when Fidrych felt a pain in his pitching shoulder. He was unable to continue. The team diagnosed him with a “tired arm” at first, but when he tried to throw a week later, Fidrych still felt the pain. Later, the Tigers claimed The Bird had tendinitis in his elbow, a curious assertion since the pain was in his shoulder.

Fidrych never pitched again in 1977. You probably know the story, if you’re a Detroit fan: The Bird never again regained his form, making aborted attempts at a comeback in each of the next three seasons. He made his last start in 1980 when his ERA soared to 5.68 in nine starts. He never pitched again in the majors, and years later when the technology caught up with his arm, it was found that Fidrych had torn his rotator cuff almost completely through. The knee injury probably led to him changing his delivery, and his arm body went “SNAP!”

“The way I look at it, it was just time for my arm to go,” Fidrych said in August of 1977, before he knew how serious and life-changing the injury would be. “I was going out there, busting my butt all the time, and one day it just happened.”