The Tigers’ bench is ill-equipped to spell the everyday lineup 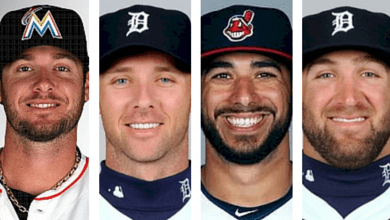 Jarrod Saltalamacchia, Andrew Romine, Mike Aviles, and Tyler Collins will be on the bench for the Detroit Tigers in 2016.

In this era of bloated bullpens, teams have less room on their rosters for position players. Carrying a dozen pitchers, as most American League teams do, means there is room only for four substitutes on their bench. One of them must be a backup catcher. That leaves three total spots for pinch-hitters, pinch-runners, and defensive substitutes at seven positions.

The composition of these few spots on the short bench has become more and more  crucial. In order to adequately cover all positions on the field, any sub has to be able to play at multiple spots. Thus, utility men have become more common and more valuable—and their careers have lengthened. And is that is why the Detroit Tigers recently signed Mike Aviles (not simply because they wanted to have a player on the roster whose name began with A-V-I-L to replace Alex Avila, who’s gone to the White Sox).

Tyler Collins will probably again be the extra outfielder. Andrew Romine can fill in all over the infield. The new second-string catcher is Jarrod Saltalamacchia. Aviles will clearly hold down that fourth spot on the bench.

Unlike Collins, who can’t play the infield, and Romine, who can’t play the outfield except in a real pinch, Aviles can play everywhere in the infield as well as the corner outfield spots. He hasn’t played any of those positions particularly well, however. Probably his best spot is second base, but anywhere else he has only mediocre to poor range. But he has experience at all the stations on the field.

Otherwise, why pay a thirty-five-year-old with declining offensive production the money for a contract of any sort? It’s especially puzzling because Aviles bats right-handed.

Detroit has Anthony Gose, who bats left, and Victor Martinez, who is a switch-hitter. Last year they could also turn to Avila at catcher—and Collins and Romine to get  occasional starts. This year the picture is now exactly the same, except that Saltalamacchia, a switch-hitter, has replaced Avila.

Last year, however, Saltalamacchia had an OPS more than 300 points higher when batting right-handed. That was an aberration—in all but one of his other nine seasons, he’s been more productive batting left-handed.

Aviles has consistently hit lefties better than righties (in seven of the last eight seasons).  For the last four years, he hasn’t hit either type of pitchers very well. His OPS has been steadily sinking closer to the .600 mark. He is a below-average offensive player, and a much-below-average defensive player,

Romine also has hit lefties slightly better than righties in his career—though he doesn’t hit anyone very well. Getting above .600 OPS in a season is a major achievement for him.

Saltalamacchia is probably a better hitter than Avila at this point in his career, so that’s a slight upgrade. He is certainly no better defensively—so call that a wash. In any event, James McCann will be starting at least 120 games at catcher.

The Tigers’ bench, overall, doesn’t have any particularly potent weapons. And with the addition of Aviles, it’s just gotten even less potent—if a little more versatile.

Fortunately, Detroit’s regulars will be expected to play almost every day at almost every position. But the Tigers are ill-equipped to handle serious injuries of any sort to its aging everyday lineup. And it has little or no versatility to strategically deal with platoon advantages in the later innings of games.