The Tigers have a long tradition with the MVP Award 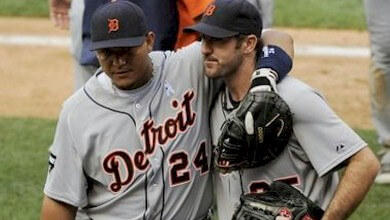 Miguel Cabrera and Justin Velander have won three MVPs between them for the Tigers.

The 2015 Most Valuable Player Awards have been given out, and there were no big surprises. Both Josh Donaldson and Bryce Harper are deserving of the awards.

Members of the Baseball Writers Association of America vote on the prize, as they’ve been doing since 1931. The process is very simple. According to the BBWAA’s website, “Ballots from two writers in each league city prior to postseason play are tabulated on a system that rewards 14 points for first place, nine for second, eight for third on down to one for 10th.”

No Tiger garnered any first-place votes this year, nor should they have. But David Price accumulated 62 points, Miguel Cabrera 40, J.D. Martinez 18, and Ian Kinsler 3 points. What? No love for Rajai Davis?

Many people have a problem with the MVP Award because the whole logic behind it is a kind of Catch-22. If your team didn’t finish in first place (as was the case with Harper), how “valuable” could you have been? And first-place teams are champions because of the contribution of an entire roster, not just one superstar. And sometimes the most valuable player on a team doesn’t always have the best numbers, and the award rarely, if ever, takes that into account.

I read somewhere that the official name of the trophy is the Kenesaw Mountain Landis Award. Landis was the commissioner of baseball from 1920 to 1944. I always thought it was called the Babe Ruth Award. Whatever. I think we should just call it the Player of the Year Award, because that is essentially what it is.

The forerunner to the MVP Award was the Chalmers Award, from 1911 to 1914. This was given by the Chalmers Automobile Company to the player with the highest batting average in major league baseball. Ty Cobb was the first winner. It wasn’t really given to the most “valuable” player, and was a promotional gimmick more than anything. Cobb was actually at the center of controversy the year that he won it, which is the subject of a great book that came out in 2014 called The Chalmers Race, by Rick Huhn.

In the 1920s, both leagues gave out awards that were similar in philosophy to the Most Valuable Player Award, although they weren’t named as such. Finally, in 1931, the MVP Award was born, and it has been around ever since.

Do you know who the first Tiger MVP winner was? It was Mickey Cochrane, who took home the honor in 1934. In his first season as catcher-manager, he guided the team to the World Series (which they lost to St. Louis in seven games). Cochrane’s MVP credentials that year were impeccable. It wasn’t so much his numbers. They were certainly very good, but other candidates had superior offensive years, most notably Jimmie Foxx and Lou Gehrig (who won the Triple Crown). It was Cochrane’s leadership and intangibles, however, which made him deserving. He changed the culture in Detroit, bringing a winning attitude that had been missing for decades. He was an MVP in the truest sense of the word. Without him, the Tigers would have been an average team, at best.

The next year, Hank Greenberg won it for a Detroit team that returned to the Series, and won it, against the Chicago Cubs. Greenberg had his first truly great season in 1935, with a league-leading 36 home runs and 168 RBIs, while hitting .328.

In 1937, the Tigers finished in second place, 13 games behind the Yankees. But Charlie Gehringer won the MVP Award with a fantastic season in which he won the batting title at .371. Gehringer was nicknamed The Mechanical Man, and with good reason. He was as reliable as a well-oiled machine.

Greenberg won it again in 1940 when the Tigers squared off against Cincinnati in the Series, only to lose. By the following year, Greenberg was off to war, and wouldn’t return to baseball until midway through 1945. All told, he missed nearly four full seasons in his prime.

Hal Newhouser was the first Tiger pitcher to win the MVP Award, and he did it in consecutive years (1944-45). He came close to winning 30 games in 1944, but settled for 29. Some historians give less legitimacy to Newhouser’s great years because he was competing against war-depleted rosters. Still, he was a great pitcher even after the war was over, twice winning twenty games for Detroit.

After Newhouser, we have to leap forward to 1968, the Year of the Pitcher, before another Tiger would win an MVP Award. Denny McLain’s 31 victories that year made him a cinch to take home the hardware. Of course, he also became the first Tiger to win a Cy Young Award.

In 1984, first-year Tiger Willie Hernandez won the MVP with one of the best seasons ever by a relief pitcher. Hernandez saved 32 games, which seems modest today, but back then it was still considered a high total. Besides, they really were “relief” pitchers back then. Their job was to put out the fire, to kill the opposing team’s rally with the game on the line, not simply to come on in the ninth with a three-run lead in order to pad their save totals.

More recently, Justin Verlander won the MVP in 2011, continuing Detroit’s exceptional record of pitchers winning baseball’s ultimate individual prize. And, of course, Miguel Cabrera won it in 2012 and 2013. Both years, Cabrera edged out Mike Trout. Some sabermetricians felt Trout was more deserving, while those in the more “traditional” statistics camp reasoned that Cabrera’s Triple Crown in 2012 made it an automatic slam dunk.

In the grand scheme of things, the Most Valuable Award doesn’t mean much. It gives the player a nice trophy to put on his shelf, and some leverage in contract talks. For fans, it gives them some debate fodder, and anything that gets people talking more about baseball is a good thing.