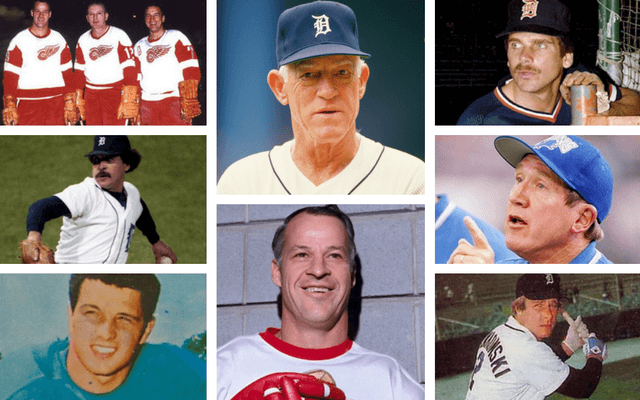 October 31
On October 31, 1979, the Tigers acquire veteran infielder Richie Hebner from the New York Mets for Phil Mankowski and Jerry Morales. Hebner fills in at third and first base in 2 ½ seasons with Detroit, driving in 82 runs in his first year with the club.

November 1
On November 1, 1947, the unit of left wing Ted Lindsay, center Sid Abel, and right wing Gordie Howe becomes a set line in the rotation for Detroit coach Tommy Ivan. The trio will become known as “The Production Line” and help the Red Wings to two Stanley Cup titles in the five seasons they skate together. In the 1949-50 they finish 1-2-3 in the NHL in scoring.

November 2
On November 2, 1910, Ty Cobb and other Tigers play in the first of several exhibition games against Latin and black ballplayers in Cuba. Though reports of the games are hard to confirm, Cobb performed well, though he was thrown out attempting to steal by black catcher Bruce Petway, one of the best negro league players of the era. Cobb also faces John “Pop” Lloyd, a talented shortstop known at the time as “The Black Honus Wagner.”

November 3
On November 3, 1948, Gordie Howe plays in his first All-Star Game and makes history. In the game, Howe gets into a fight with Gus Mortson of Toronto, earning a major penalty. The infraction is the first, and only, penalty for fighting in NHL All-Star Game history.

November 4
On November 4, 2010, former Tiger manager Sparky Anderson dies in Thousand Oaks, California at the age of 76. In 17 seasons with Detroit, Anderson won 1,331 games, leading the team to the post-season twice, including a World Series title in 1984. Anderson was the first manager to win 100 games in both leagues, and also the first manager to win a World Series in both the AL and NL.

On November 4, 1956, the Lions beat the San Francisco 49ers on a fourth quarter touchdown plunge by Leon Hart, 17-13. The win improves the Lions record to 6-0, the first time the franchise has ever won that many games to start a season. Despite the great start, the Lions go 3-3 the rest of the way and miss the playoffs.

November 5
On November 5, 1981, the Pistons beat the New Jersey Nets 109-103 at the Pontiac Silverdome to stay undefeated on the young season. Rookie point guard Isiah Thomas fouls out of the game, but the Pistons still hang on to go 3-0 for the first time since 1971.

November 6
On November 6, 2000, one day after a loss to the Dolphins, Bobby Ross steps down as head coach of the Detroit Lions. Calling the 23-8 defeat the “most embarrassing loss of my career,” Ross says he’s burned out and takes full responsibility for not having the Lions ready to compete. At the time he quits, the Lions are 5-4. He’s replaced by his assistant and former Michigan head coach Gary Moeller, who lifts the team to wins in each of his first three games, but the Lions falter and miss the playoffs with a 9-7 record.

On November 6, 1984, just one week after winning the Cy Young award, Detroit’s Willie Hernandez is named the recipient of the American League Most Valuable Player Award. The Detroit lefty is the second relief pitcher to win the MVP, joining Rollie Fingers. He is the third Tiger pitcher to win the honor, after Hal Newhouser and Denny McLain.