This Week in History: Barry runs over the Bears on Thanksgiving in 1997 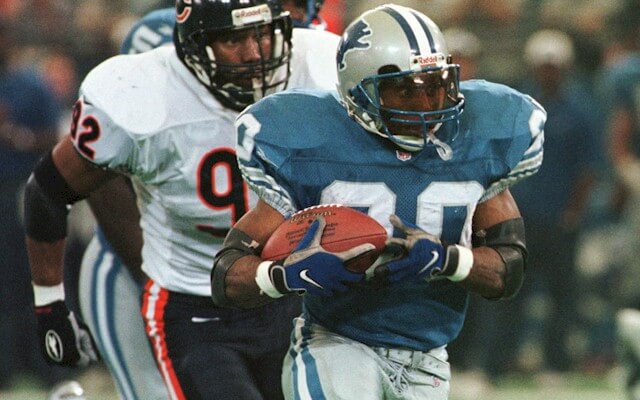 Barry Sanders scored three touchdowns against the Bears on Thanksgiving Day in 1997.

Here’s our weekly look at what happened this week in Detroit sports history:

November 21
On November 21, 2011, Tiger pitcher Justin Verlander is named Ameeican League Most Valuable Player. Verlander becomes the first pitcher to win the honor since Roger Clemens in 1986. Verlander went 24-5 and led the league in ERA and strikeouts as he led Detroit to their first division title in 24 years. The previous week, Verlander was named the winner of the Cy Young Award.

On November 21, 1996, Steve Yzerman registers one goal and two assists in Detroit’s 6-1 win over the San Jose Sharks, to move ahead of Alex Delvecchio into second place on the Red Wings’ all-time scoring list. Yzerman will finish his illustrious career with 1,755 points, trailing only the great Gordie Howe among Detroit players.

November 22
On November 22, 2012, the Lions lose their ninth consecutive Thanksgiving Day game, falling in overtime to the Houston Texans, 34-31. The Texans score a touchdown with less than two minutes left to tie the contest then kick a field goal in OT to disappoint the Detroit fans again on Turkey Day. It’s the longest losing streak in the traditional game for Detroit.

On November 22, 1990, the Lions defeat the defending AFC champion Denver Broncos on Thanksgiving at the Silverdome, 40-27. QB Bob Galgliano throws three touchdown passes and Barry Sanders rushes for 147 yards in the win.

On November 22, 1962, the Lions defeat the Green Bay Packers 26-14 on Thanksgiving Day in Tiger Stadium. The Packers had come into the game with a 10-0 record and would go on to win the NFL title.

On November 22, 1945, after a six-year absence due to league scheduling and World War II travel restrictions, the Lions play their first Thanksgiving game, losing to Cleveland, 28-21 at Briggs Stadium.

On November 22, 1927, the Detroit Cougars play their first NHL game at Olympia Stadium. The Cougars will later be renamed the Falcons and then the Red Wings. Detroit’s professional hockey club will play their home games in Olympia Stadium for 52 years.

November 23
On November 23, 1978, Horace King plunges into the end zone for the game-winning touchdown as the Lions defeat the Denver Broncos on Thanksgiving Day at the Silverdome, 17-14. The Lions enter the game at 4-8 but they play well enough to defeat the Broncos, who had been in the Super Bowl the previous season.

November 24
On November 24, 2006, Detroit’s Chris Chelios plays in his 1,496th game, setting a new NHL record for players born in the United States.

On November 24, 2002, in a decision that angers Lion fans, head coach Marty Mornhinweg chooses to kick the ball to the Bears despite winning the coin toss to start overtime. The Bears promptly march down the field, kick a field goal, and defeat the Lions, 20-17. Mornhinweg explains that he preferred to have the wind in his favor, but the boneheaded decision is indicative of his unsuccessful stretch as coach of the team. He’s fired at the conclusion of the 2002 season, having lost his final eight games.

On November 24, 1943, Dave Bing is born in Washington D.C. Bing is the Pistons’ first round pick in the 1966 NBA Draft and earns Rookie of the Year honors. The Hall of Fame point guard spends nine seasons with Detroit and is later elected mayor of the city.

On November 24, 1938, Chuck Hanneman catches a pass from Vern Huffman in the fourth quarter to give Detroit a 14-7 victory over the Bears in the first Thanksgiving Day game played at Briggs Stadium.

November 25
On November 25, 1983, an NHL record is set when 21,109 spectators watch the Red Wings defeat the Pittsburgh Penguins, 7-4 at Joe Louis Arena in Detroit.

November 26
On November 26, 2010, the Tigers sign free agent DH/catcher Victor Martinez to a four-year, $50 million contract. Martinez is a switch-hitting career .300 batter and a four-time All-Star.

On November 26, 1998, the Lions defeat the Pittsburgh Steelers on Thanksgiving Day in a game that ends in controversy. As the two teams enter overtime, Pittsburgh’s Jerome Bettis calls the coin toss in the air, but confusion surrounds his decision. The officials mishear Bettis and award the possession to Detroit, who go on to win 19-16 on their first drive in overtime.

On November 26, 1987, the Pistons acquire Darryl Dawkins from the Utah Jazz for two future draft picks. The colorful veteran center known for naming his dunks, serves as a backup for the next two seasons in Detroit, winning an NBA championship as a role player in 1988-89.

On November 26, 1961, Gordie Howe plays in his 1,000th game, becoming the first player in NHL history to reach that mark. Incredibly, the 33-year old Howe will go on to play 767 more games at the top hockey level.

November 27
On November 27, 1997, the Lions establish a franchise record for a Thanksgiving Day game when they score 55 points in their victory over the Chicago Bears. Detroit scores 38 points in the second half in their 55-20 win as Barry Sanders has one of his best games (three TDs and 167 yards rushing).

On November 27, 1981, the Tigers acquire Chet Lemon from the White Sox straight up for Steve Kemp. Lemon will solidify center field in Detroit for nine seasons, making the All-Star team in 1984 when the Tigers win the World Series. Kemp spends one year with Chicago before bouncing to the Yankees and Pirates.

On November 27, 1980, the Lions lose on Thanksgiving Day when Dave Williams of the Bears returns the opening kickoff of the overtime period for a 95-year touchdown.

On November 27, 1965, Gordie Howe scores his 600th goal in Detroit’s loss to the Canadians at the Montreal Forum. Howe is the first player in NHL history to score 600 goals.