Will Dombrowski’s legacy in Detroit be clouded by failure to win title? 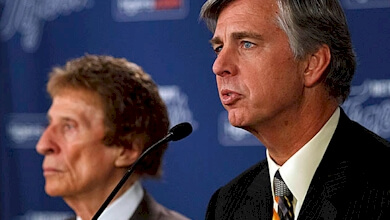 Dave Dombrowski was helped by the deep pockets of owner Mike Ilitch, but he still never delivered a World Series title.

As Dave Dombrowski made his rapid transition from Detroit to Boston, several TV commentators termed him a Hall of Fame level executive. That shows how highly regarded Trader Dave has become in the baseball world. But is the Hall of Fame a bit premature? Is there a downside to the Dombrowski legacy?

No doubt he has a great record as a canny trader. Some deals he’s made have been downright swindles, as when he stole Miguel Cabrera, and relatively few have been clunkers.

Dombrowski has taken two different franchises from the bottom of their league to the World Series. Under his leadership, Miami went to the top in 1997 and returned there in 2003, less than two years after he’d left for Detroit, on the strength of the players he had acquired. The Tigers, as we well know, had the exact same trajectory, minus the rings.

It is remarkable that for both teams the timeline was almost exactly the same—a World Series appearance about five years after Dombrowski arrived on the scene, and then another one six years later. And in both cases players Big Dave acquired in trades or through free agency played the key roles.

Essentially, what Dombrowski did in both Miami and Detroit was to put together a championship team and then expertly tinker with that team by disassembling some parts and acquiring new ones, putting the teams back together as contenders again. That’s a testament to his resourcefulness and player evaluation abilities. After neatly a decade of mediocrity, he made the Tigers worth watching again.

It is worth noting, however, that the arrival of Dombrowski coincided with decisions by the Marlins and then the Tigers ownership to greatly increase payrolls. In Miami, owners Wayne Huizenga and John Henry took the team payroll to new heights—it rose from $18 million in 1993 to $47.4 million in 1997. In Detroit, the economic transformation was even more notable. When Mike Ilitch took over the team, he at first concentrated on getting a new stadium and during that time kept the team payroll low (in 1999 it was $34.9 million, twenty-second in the majors). By the time the club moved to Comerica Park in 2000, the team was almost completely decimated.

Following a script that had been used in many other cities, Ilitch timed his spending on personnel to coincide with his windfall from the new stadium. As Dombrowski came aboard and ownership started realizing the revenue from Comerica, Ilitch loosened the purse strings and allowed his new GM to spend freely to build a team (the payroll jumped to ninth in the league in 2007, and to third in 2008, and has remained near that level ever since, comparable to the big-market teams). Just as he’d done in Miami, Dombrowski, with all this spending money available, signed a bunch of free agents—Pudge Rodriguez, Magglio Ordonez, Kenny Rogers—to build the league champion 2006 team.

With the World Series appearance achieved, fan expectations were raised to new levels, and the second phase of Dombrowski’s tenure was marked by making all the notable swaps that remodeled the team and made it another powerhouse. No one can deny there have been few executives better at such wheeling and dealing. But it should also be noted that he had few budgetary restrictions.

During his first stint running a big league team, in Montreal in the late 1980s, Domrowski was hailed for building up a farm system. But in Miami and Detroit that wasn’t the priority.

As the genius executive leaves, the Tigers are saddled with an unproductive farm system—clearly one of the very worst in baseball—and several crippling long-term contracts. The resources in both prospects and payroll have been nearly exhausted.

The Tigers now are a team that’s been turned and churned for so many years that they’ve reached a point of diminishing assets. Yet fans have been primed to expect a winner every year—a very different mindset from the pre-Dombrowski days.

In Montreal, Miami and Detroit, Dombrowski did exactly what the owners asked of him. Ilitch wanted him to build a champion no matter what the costs in the long term.

Dombrowski has left the Tigers with enough talent that they can make another run at it. But the window is starting to close as the high-priced veteran stars age. As a farewell act in his whirlwind few days of deadline trade, Dombrowski tried to re-stock the farm system with other teams’ prospects.

Is Dombrowski’s a Hall of Fame resume? Or should that be reserved for executives who restored ailing franchises to permanent health over the long term?