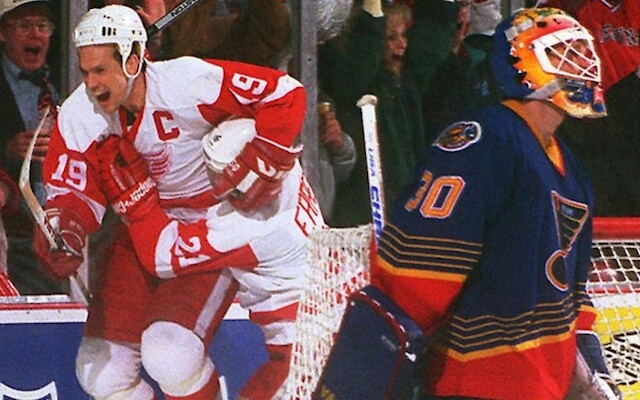 Steve Yzerman celebrates with Joahn Franzen after his double overtime goal won Game 7 of a 1996 playoff game against the St. Louis Blues on May 16, 1996. Goalie Jon Casey is in the foreground.

It was so incredible because it was so unexpected.

Maybe even extra incredible because of how late it was, or the fact that I wondered if the game could go on forever.
Tuesday marked the 21st anniversary of Steve Yzerman’s double-overtime slap shot, beating the St. Louis Blues in Game 7 of the Western Conference semifinals in the Stanley Cup playoffs at Joe Louis Arena.

As a 14-year-old, I was jumping for joy. It was one of the first overtime games I remember saying up to watch and I was jumping up-and-down.

There are very few moments like that in hockey, where an unexpected long shot end a game in double overtime.

There are very few moments like that in any sport. It is the reason that Joe Carter literally jumped for joy the entire way around the bases with his World Series winning home run in 1993.

I remember watching Carter’s home run, and Kirby Puckett’s two years prior in Game 6 of that series. Both were extremely exciting, but I had never seen that moment for my team. This was the first time I remember feeling complete jubilance for my team.

It was such an iconic moment in Red Wings history that it was probably the first time many Detroit fans felt that way — at least the ones too young to have seen Kirk Gibson’s eighth inning home run in Game 5 of the 1984 World Series (though that one didn’t end the game).

The Pistons, Tigers and Red Wings won multiple titles in the lifetime of many fans, but the signature moment didn’t always end the game or the series.

But everyone remembers Yzerman corralling the puck and launching a shot from just inside the blue line that somehow got over the shoulder of St. Louis goalie Jon Casey.

St. Louis center Wayne Gretzky mishandled the puck in the neutral zone and the puck found its way to Yzerman.

Of all the times Gretzky had playoff heroics, this was one of his few clumsy moments, moments that made him finally seem human.

In just a bounce and a couple of feet, the puck went from one legend to another and led to the biggest goal of Yzerman’s career.

And just a minute earlier, Casey had just stoned Sergei Federov on a beautiful chance right in front of the net thanks to a nifty move and pass by Yzerman. It was the kind of save that could have been a signature save, especially in a Game 7.

Of course, the Red Wings were on their way to becoming a dynasty again, but even with Yzerman’s heroics, this was not the year for Detroit. The Red Wings ended up losing in the Western Conference Finals to the Colorado Avalanche.

That next series started that rivalry. The rough play, the fights, they might never have happened without Yzerman’s goal. So in fact, Yzerman’s goal did more than just win a series, it ignited the game’s greatest rivalry in the past half century.