Zimmermann gives Tigers a top starter for their rotation 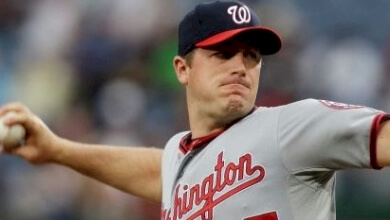 Jordan Zimmermann has averaged more than 200 innings over the last six seasons.

The first few weeks of the off-season, it looked like the Detroit Tigers were not apt to make any big splashes this off-season—Al Avila is no Dave Dombrowski.

It’s Dombrowski, after all, who’s rumored to be opening the vaults so that the Boston Red Sox can outbid other suitors by $20 million or more for David Price. The Tigers don’t seem to be playing in that universe these days. Avila’s big acquisitions to start the hot stove league were Francisco Rodriguez and Cameron Maybin—not at all headline-grabbing names.

But than, as Thanksgiving weekend was wrapping up, rumors erupted of a major acquisition that might put to rest any doubts about how serious Avila is about returning the Tigers to contention. On Monday it was confirmed—Detroit introduced right-hander Jordan Zimmerman in a press conference at Comerica Park, securing headlines guaranteed to jolt Tiger fans out of the doldrums.

Prior to the Zimmermann Gambit, it seemed Detroit no longer had the firepower to attract big-name stars. That was because the Tigers no longer had Trader Dave to pull the trigger—but more likely because they didn’t look like a contending team anymore. Coming off a last-place finish, it’s hard to make the case that Detroit is a place where a top-tier star might sign for multiple years. Prior to Sunday’s rumors of Zimmermann coming to Motown, some may have thought that Mike Ilitch had finally turned off the financial spigot.

But then “JZ” inked his name on a contract and slipped a Detroit uniform on as Al Avila watched with obvious delight. Even so, the earlier acquisitions this offseason didn’t exactly send Tiger fans into a frenzy. Few fans are excited about K-Rod and Maybin.

Rodriguez is a thirty-three-year old closer long removed from the days when he would blow people away. Maybin is still on the right side of thirty but hasn’t impressed anyone since Detroit picked him in the first round of the 2005 draft.

Both players have turned in several lackluster seasons in the last five years. In 2012 K-Rod’s ERA was 3.83, in 2013 it was 3.65, and in 2014 it was 4.50. That’s a far cry from his dominant years with the Angels (2005-2008) when he was saving forty-plus games a season and striking out twelve-plus batters per nine innings. That was when he earned his nickname, befitting his reputation as a flamethrower who could blow by batters.

Since his days as a top Detroit prospect, Maybin has accomplished little more than being a key chip for Dombrowski in the big trade in which the Tigers acquired Miguel Cabrera from the Marlins. Florida subsequently shipped Maybin to the San Diego Padres, who passed him along to the Atlanta Braves. He’s spent significant time on the disabled list. His only decent seasons where he’s played a whole year came in 2011 and 2012 for the Padres, and in those two years he accumulated 7.5 WAR, thanks mainly to his defense. In the entire rest of his career he’s only racked up 1.9 WAR. And only in 2011 was his OPS above a league-average .700. He has been a very mediocre offensive performer.

In the last couple seasons, K-Rod has reinvented himself. While his strikeout rate has decreased as his fastball velocity has declined, the development of secondary pitches has made him a more complete and versatile pitcher. For the first time since his rookie season in 2002, his WHIP has dipped below 1.00 for the last two seasons; in fact, it’s steadily declined for four straight years, from 1.33 to 1.20 to 0.98 to 0.86. That’s due primarily to a decline in his walk rate from 3.9 per nine innings in 2012 to just 1.7 in 2015. K-Rod has become more of a control pitcher even as his strikeout rate has remained just above one per inning. K-Rod profiles today similarly to Justin Verlander as a pitcher who’s learned better ways to succeed as he’s aged. Though no longer known as a top-tier closer, he may fit the bill perfectly in Detroit—especially since he’ll not be as homer-prone in Comerica. K-Rod may in fact be an excellent acquisition for the Tigers and a real bargain who can plug that big hole at the back of the bullpen.

As for Maybin, he took a smaller step forward in 2014 and managed an OPS of .697. His defense has always been good, and if he is shifted to left field, as seems likely, he may be a better-than-average corner outfielder. And obviously Avila and the Tigers brass feel that they could motivate him again. Detroit was the team, after all, that saw a five-tool superstar in Maybin originally—so maybe they can repair those tools.

In any case, at the cost of Ian Krol, he’s certainly a bargain. With Maybin, Anthony Gose, and J.D. Martinez, and with Tyler Collins as a back-up, Avila has indicated he’s done tinkering with the outfield. The alignment is at least serviceable even if it isn’t going to garner much attention.

Besides, it’s the pitching staff that let this team down this past season, a shocker seeing as how as recently as 2013 the Tigers had one of the most dominant starting quartets in recent years. Now, with Zimmermann in tow, the Tiger roster looks more impressive and the offseason gains look a little better.