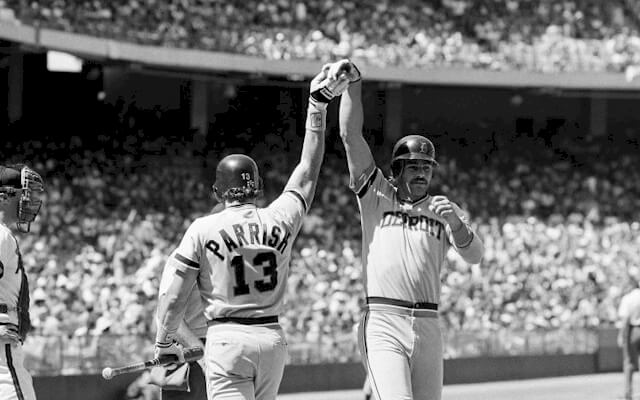 Lance Parrish and Kirk Gibson celebrate a home run during a game in Anaheim early in 1984.

The Detroit Tigers went wire-to-wire to win the 1984 World Series.

Few teams go wire-to-wire and have a 35-5 start to the season. But there are other unbelievable things that happened during that amazing season that easily get overlooked by their incredible start.

The anniversary of one of those underappreciated records is this week. On May 23, 1984, the Tigers defeated the California Angels 4-2. There wasn’t anything earth shattering about the game itself except that it was Detroit’s 16th consecutive road victory, tying an American League record. They would break it the next night with a 5-1 win for 17 in a row.

The more that number sinks in, the more impressive it is. To have 17 consecutive wins on the road is astonishing.

These are wins in different cities, after long plane rides, different ballparks, different time zones and against a variety of opponents, including starting pitchers.

It also was the first 17 road games of the season, making the streak even more impressive. It didn’t come in the middle of a season spread out or over the course of two seasons.

It started on opening day, April 3, when the Tigers defeated the Minnesota Twins in the Metrodome 8-1, behind a strong performance on the mound by Jack Morris, a home run by Darrell Evans and multi-hit games from Alan Trammell and Lou Whitaker.

The Tigers won 7-3 two days later before traveling from Minnesota to the South Side of Chicago to face the White Sox. Milt Wilcox eked out a 3-2 win on April 6, setting up one of the most memorable games of the season.
On Saturday, April 7, Jack Morris threw a no-hitter at Comiskey Park, beating the White Sox 4-0 and giving the 1984 Tigers an early signature moment.

The Tigers completed the sweep with a 7-3 win the following day.

After a couple of home wins against Texas, the Tigers headed to Boston to face the Red Sox in Fenway Park. The Tigers improved to 8-0 with a 13-9 win. Weather forced the Tigers to have five days without a game and Detroit returned to Tiger Stadium for a 4-3 walk-off win in 10 innings, giving the Tigers a 9-0 start before finally losing 5-2 to Bret Saberhagen and the Royals.

The Tigers hit the road again on April 25 and defeated Texas 9-4 and 7-5 before returning home after the short trip.

On May 4, with a 19-4 record, the Tigers traveled to Cleveland and Dan Petry was the beneficiary of some major offense as the Tigers won 9-2. The Tigers won 6-5 the next two days, the latter coming in 12 innings for the three-game sweep and 11 straight wins on the road.

Detroit went directly to Kansas City where the Tigers swept a three-game set, wining 19-3, 5-2, and 3-1, making it 14 straight on the road before heading back to the Motor City.

On May 22, the Tigers made their first West Coast trip of the season to face California. A three-game sweep consisted of a 3-1 win by Juan Berenguer, a 4-2 win by Dan Petry and a 5-1 victory by Jack Morris on May 24, capping two streaks with one game.

It was the record-breaking 17th consecutive road victory and also put the Tigers record at 35-5, one of the most astonishing starts in baseball history.

Both streaks would come to an end the next night as the Tigers invaded the Kingdome on May 25, only to get swept by the Mariners in three games.

But the road streak of 17 remains one of the forgotten gems of the 1984 season for the Tigers.