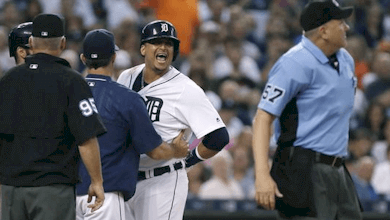 By the time Brad Ausmus came onto the field in a game last month, his slugger Victor Martinez had already been ejected.

The 2016 season is slowly slipping away. There are now four weeks left on the schedule and the schizophrenic team we call the Detroit Tigers are resting on the edge of contention. But there’s still doubt that this streaky team will muster the wins needed to grab a spot in the playoffs.

There are many reasons this Detroit team, the ’16 version of it, are flailing on the outer edges of contention, frustrating their fans with short bursts of winning followed by funk-filled stretches of losing. One of those reasons is their leadership in the dugout, and last week we saw an example of the failure of that leadership.

Last weekend during a three-game series at Comerica Park against the Angels, the Tigers suffered at the hands of a poor case of umpiring. Home plate umpire Mike Everitt called a strike zone that was wide enough to drive a Faygo truck though, at least when the Tigers were at the plate. Everitt’s balls-and-strikes were inconsistent and exasperating. Eventually, four Tigers were ejected, including key players Victor Martinez and J.D. Martinez. Manager Brad Ausmus and hitting coach Wally Joyner were also tossed.

But it was what Ausmus didn’t do that illustrates how lifeless he can be as a team leader. In the third inning when VMart took a pitch that he thought was low and inside, but was called a STEEERIKE! by Everitt, the Detroit designated hitter started a conversation with the umpire. The chat was subdued, but it was obvious Victor was not happy. He stepped out of the batters’ box and eventually Everitt approached him. That’s not good form by Everitt, it should never be an umpire show out on the diamond, but it’s what didn’t happened next that bothers me. Ausmus sat on his hands. He allowed his DH, the second-most important hitter on his team, to continue to argue, eventually earning an ejection. Ausmus only came out to talk to Everitt after Victor was ejected from the game. By then it was too late. It was like locking the barn door after the cows had gotten out.

Ausmus has to place himself between his star and the umpire immediately, as soon as he sees that there’s a problem. If the manager gets ejected, so be it. He’s not going to take any at-bats that day anyway. The manager can’t allow a player as valuable as Martinez to get tossed early in a critical game. And every game is critical for this team. As June Carter Cash once famously sang, Time’s A Waistin’.

Later in the game, J.D. was tossed out, which is when Ausmus got himself heated. By then he’d already lost two of his best hitters. You can’t let that happen. It never would have happened under Jim Leyland, I can tell you that. Leyland was a master at working the umpires. He was skilled at protecting his players. He was a leader.

I like Brad Ausmus, and as I’ve written here before, I don’t think managers make a huge difference for most teams. They can get in the way more than they can win games. I think Ausmus’s curious decisions on playing time (Mike Aviles anyone?) have at times been baffling and ridiculous. But, I think he’s done a fairly good job with the pitching staff in 2016. However, for leadership he gets a big fat FAIL for the way he’s handled situations on the field like what happened against the Halos last week when umpire Everitt went rogue.

A seasoned manager — a good manager — would have nipped that in the bud by getting himself between the umpire and his players. He would have shown some emotion and gotten ejected before his valuable players were tossed out of the game. Jim Leyland never would have let that happen. Too often we’re left to wonder if Ausmus has the needed assertiveness to be an effective on-field leader.

The Tigers lost the game in question 3-2. Predictably, later in the contest there were situations where either Martinez (Victor or J.D.) would have been at the plate with the tying run on base. But they were already undressed and in the clubhouse, just like Brad Ausmus has been undressed as a failed leader of this team.