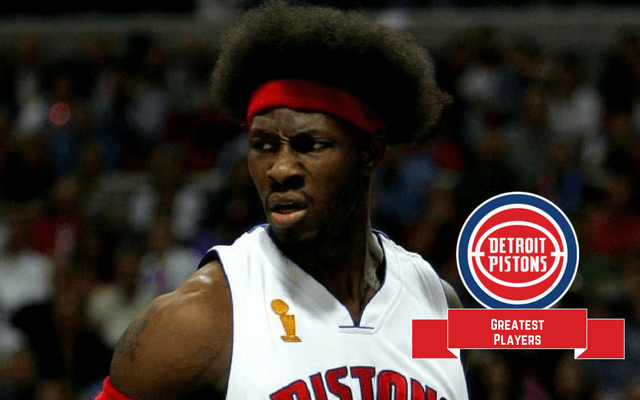 This is the first in a series that looks at the Greatest Players in the History of the Detroit Pistons.

“Fear the fro.” An iconic phrase that legendary Pistons center Ben Wallace will always be known for.

However, when he came to Detroit via a sign-and-trade with the Orlando Magic for Grant Hill in August of 2000, he was not deemed to be a player who would become anything close to a franchise icon.

He had never averaged 30-plus minutes a game in his four previous NBA seasons.

But quickly, with his famous “fro” and his knack for rebounding and blocking shots at premium rates, he became a Pistons fan favorite.

The Pistons experienced one of the best five-year stretches in franchise history from ’01-02 until ’05-06, and it was all about getting after it defensively, in large part due to “Big Ben’s” presence.

And don’t let the moniker “Big Ben” fool you because he truly wasn’t that big of a center. In fact, he was rather undersized at his listed playing height of 6 feet 9 inches tall, and he’s admitted that he’s really only 6 feet 7 inches tall. For instance, Shaquille O’Neal, the center he squared off with during the 2004 Finals, the 2005 Eastern Conference Finals and the 2006 ECF, is a towering 7 feet 1 inches tall.

A normal 6-foot-7-inch man would have had no shot at defending Shaq. But Wallace was no typical 6-foot-7-inch player. For instance, in five games in the ’04 Finals, he out-rebounded Shaq, 68-54.

During the 2003-04 regular season, he helped the Pistons play some of the best defense the league had seen since the inception of the shot clock during the 1954-55 season. Spearheaded by Wallace, the Pistons allowed 84.3 points per game, tied with the San Antonio Spurs for the third-lowest total since the advent of the shot clock.

And because of his impressive defensive play during his time in Detroit, he marked his name into the NBA record books. Most notably, he became the first player in NBA history to win the Defensive Player of the Year award four times in a five-year span (from 2001-02 to 2005-06).

His “small” stature for an NBA center is what made what he did on the court even more magnificent. And his humble beginnings surely added to it.

Born in White Hall, Alabama, Wallace did not attend a big-time basketball university. Instead, Wallace, the second-youngest of 11 children and the youngest of eight brothers, found his way to Ohio-based Cuyahoga Community College after Auburn, whom he had signed a letter of intent with, told him that they’d only let him play football.

However, he wanted to also continue playing basketball. So, he did, and boy was it the right decision.

After two years of junior college ball, he went on to play at Virginia Union, a historically black university in Richmond, Va., which competes at the NCAA Division II level.

Despite the success he garnered at VU, Big Ben was not selected in the 1996 NBA Draft due to being undersized, not having much of an offensive game, and the lack of exposure he received from playing at the Div. II level.

Subsequently, he was forced to fight extra hard to gain a spot in the league, and that’s what he did. Wallace obtained his first crack at proving his worth as a pro with Washington, who was then referred to as the Bullets. The Bullets became the Wizards at the start of the 1997-98 campaign, which happened to be Wallace’s second campaign in The Association. It also happened to be his first time playing 60-plus games in a season (he played in 67) and the first season in which he started a game (16 in all).

He made major strides the following two seasons (his last with the Wizards and his only one with the Magic). From his sophomore season to his junior season in the league, he increased his minutes from 16.8 to 26.8, increased his field goal percentage from 51.8 percent to 57.8 percent and increased his rebounds per game from 4.8 to 8.3.

Due to the tremendous amount of progress he made, Wallace got the chance to start 81 games for his new team, the Magic, during the 1999-00 campaign. He didn’t do enough as a starter in his one season as a member of the Magic to warrant Orlando making him unavailable in trade discussions, though. But remember, one man’s trash is another man’s treasure.

The Magic found that out the hard way, and after Detroit acquired him, Wallace blossomed into a four-time All-Star and four-time Defensive Player of the Year while the fragile Hill, once tagged as the second-coming of Michael Jordan, played in a grand total of 47 games in his first four seasons donning a Magic uniform. In fact, the former Piston star missed all of the 2003-04 campaign with an ankle injury.

The once-believed one-sided trade in favor of the Magic didn’t turn out that way at all. Remember, the Pistons also got point guard Chucky Atkins in the deal, who proved to be a capable starting PG before Joe Dumars and the Pistons acquired Chauncey Billups during the 2002 offseason.

Atkins then was used as a trade chip in the big, three-way deal that landed Joe D & Co. Rasheed Wallace midway through the ’03-04 season. In case you’ve forgotten, “Sheed” was largely viewed as the missing piece to the squad’s title-winning puzzle.

Now, back to Big Ben, who, along with Sheed, formed a potent, rim-protecting duo in Motown. With and without Sheed, Big Ben brought a ton of excitement to Detroit and its fans. In fact, he was one of the rare professional athletes who could put on a show for the fans by himself. He did so by blocking shots—a franchise-record 1,486 shots—and by making awe-inspiring defensive plays, which were accompanied by the signature Big Ben “gong” sound effect at The Palace.

Those exciting plays and his afro-wearing ways brought so much attention to him that Pistons fans started donning their own Big Ben-esque afros, mostly of the fake variety. The likable Wallace epitomized the “lunch pail work ethic” of the city and gave the Detroit fan base an identity that it could gravitate toward for the first time since the days of the “Bad Boys” Pistons.

It was fitting that he was the first Piston from the 2004 championship team to have his number—No. 3—retired and raised up to the rafters at The Palace. Billups, commonly referred to as “Mr. Big Shot” for his clutch, shot-making ability, followed in getting his jersey retired and hung up in the rafters. Billups deserved the honor, and Richard “Rip” Hamilton—projected to be the next player from that squad to have his number retired—also had a career in Motown worthy of jersey retirement consideration.

But in my view, Big Ben should be recognized as the greatest Piston of that championship team because of the huge impact he had on both the team and the fans.

In the spirit of this year’s presidential election, it’s time for your voices to be heard! Who do you think should be labeled as the best player to don a Pistons uni from 2000-01 to 2005-06? Leave your responses in the comments selection below.