Trivia: How well do you know the history of the Detroit Lions? 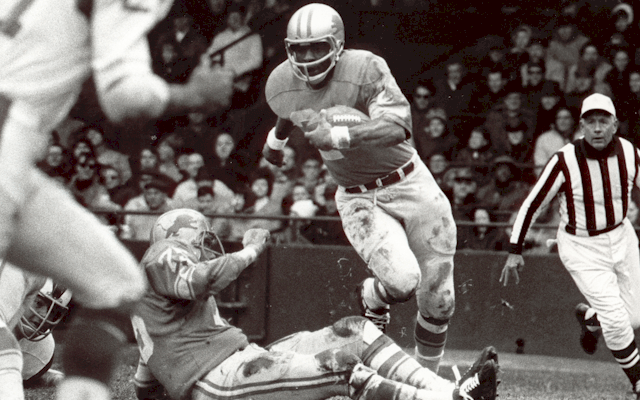 Yes, it is that time of year again.

The leaves are changing color. The pumpkins are dotting the rolling landscape. The cider mills are cranking out those artery-clogging donuts. And NFL football is underway.

Ok, so we’re not watching it as much as we used to (or at least the same way as we used to), if the television ratings are any gauge. But don’t tell that to fans of the Honolulu Blue and silver.

With that, let’s jump right in to the latest edition of Detroit Lions history trivia.

Before moving to Detroit in 1934, the team was located in Portsmouth, Ohio, and known as the Spartans. On December 18, 1932, they played what is generally acknowledged as the first NFL playoff game. Portsmouth lost to the Chicago Bears, 9-0. The outcome might have been different, but the Spartans were without their star player, Earl “Dutch” Clark, who had already left the team to begin his offseason job as:

a) a salesman for Florsheim shoes.
b) a Christmas Santa at the downtown Hudson’s.
c) the swimming coach at Bowling Green University.
d) the basketball coach at Colorado College.

Why was the Lions game against the New York Giants on November 7, 1943 noteworthy?

a) The Giants scored 67 points, the most lopsided shutout victory ever.

b) The Lions lost 13-1, the only time in NFL history a team has scored only one point. It came as a result of the league’s failed one-game experiment known as “The Barefoot Rule.”

c) Both teams scored on every possession, the only time that has ever happened in NFL history.

d) The game ended in a 0-0 tie, the last time that has ever happened in the NFL.

In 1948, new Lions coach Alvin “Bo” McMillan decided to dump the team’s Honolulu Blue and silver uniforms in favor of a radically different color scheme. What was it?

What was the winners share for each Lions player in the 1957 NFL title game?

What NFL Hall of Fame head coach began his NFL coaching career as a defensive coordinator for the Lions?

In an August 6, 1967 exhibition game, the Lions became the first NFL team to do which of the following:

In 1970, Mel Farr and Lem Barney befriended a famous singer who had unsuccessfully tried out for the Lions. They later teamed up with the singer as background vocalists on one of his biggest hits. Who was the singer, and what was the song?

a) Sly Stone: Que Sera, Sera (Whatever Will Be Will Be)
b) Isaac Hayes: Theme From Shaft
c) Marvin Gaye: What’s Goin’ On
d) Cory Wells of Three Dog Night: Joy to the World

How many times did the Lions host a Monday Night Football game at Tiger Stadium?

Which player were the Lions seriously hoping to select with the third pick in the 1989 NFL draft, until head coach Wayne Fontes made a big pitch for Barry Sanders?

Who threw the first touchdown pass at Ford Field?

Scroll down for the answers.

How did you do?