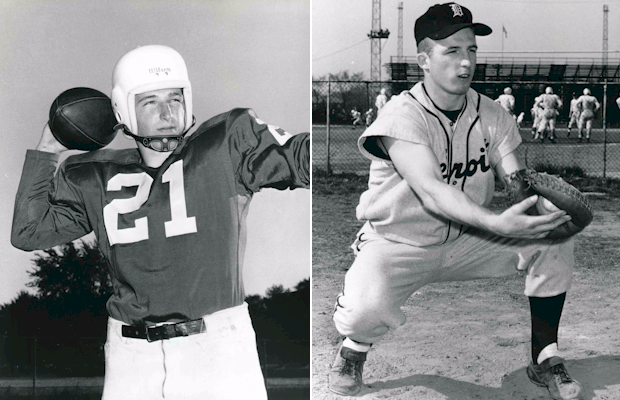 Bruce Maher played for the Detroit Lions in the 1960s and also briefly tried professional baseball with the Detroit Tigers in their minor league system.

It’s a gimmicky shot, the kind a photographer desperate to inject something different into his work occasionally composed for the sports section. The wire service photo shows a ballplayer in a Detroit Tigers uniform lugging a catcher’s glove like it’s a football in his right arm while using his left to stiff-arm an invisible opponent. “Footballer Bruce Maher gets his sports mixed up as he hurdles into first base,” the caption partially reads.

Knowledgeable football fans remember Maher as the fellow who played left safety for the Detroit Lions during most of the 1960s. What the photo suggests is something most Lions fans either forgot or didn’t know—that Maher also was a standout baseball player in college, one who was divided over what sport to purse once he graduated from the University of Detroit in 1960.

Maher’s indecision was understandable. As a boy, he had idolized Lions halfback Doak Walker while also joining in the cheering at Briggs Stadium for hometown heroes Al Kaline, Harvey Kuenn, and Charlie Maxwell. Scouts from the Lions and Tigers had kept close tabs on Maher, who earned a combined half-dozen varsity letters in both sports at U-of-D. Maher was a speedy two-way back in the autumn and an All-Catholic All-American catcher in the spring.

The Lions thought so highly of Maher they selected him on the 15th round of the 1959 draft, even though he had a year of eligibility left. Maher entered the NFL in 1960 and immediately impressed head coach George Wilson. However, for the next couple of seasons he had a hard time cracking into the starting lineup. He was used mostly on kick returns and special teams, occasionally taking a turn in the offensive backfield and spelling one of the veterans in the secondary.

Baseball’s annual amateur player draft, as we now know it, did not exist then. In February 1961, just a couple of months after finishing his rookie season with the Lions, Maher was invited by the Tigers to a rookie tryout in Lakeland, Florida. He was thought to have a decent chance of making it in organized ball as either a catcher or outfielder.

Maher displayed enough potential to be assigned to the Durham Bulls of the Carolina League. Durham, managed by Al Lakeman, was the Tigers’ Class B affiliate. The roster included future Tigers Mickey Lolich, Gates Brown, Pat Dobson, Leo Marintette, and Chico Fernandez, each of whom was between two and five years younger than the 24-year-old Maher.

Maher played sparingly on a team that struggled to play .500 ball. There were four catchers ahead of him on the depth chart, and the outfield was crowded with prospects. He appeared in 13 games, batting .222 in 27 at-bats. He hit one home run, had three RBI, and struck out every third at-bat.

After one partial so-so season of organized ball, Maher decided his future was not on the diamond. He transferred his aggressiveness to the gridiron. In 1963 he became a full-time starter, replacing Gary Lowe. Playing in a secondary that included three future Hall of Famers—Dick “Night Train” Lane, Yale Lary, and Dick LeBeau—Maher made his presence felt.

“Nobody in the league plays with more desire,” assistant coach Carl Taseff said in 1965, the year Maher was voted the team’s most valuable player. “Bruce is the reckless type when it comes to throwing himself into any play.” Three years later, he was given the same honor by his teammates on the New York Giants, the team with which he spent the last two seasons of his 10-year career. Overall, Maher picked off 22 passes in 136 games with the Lions and Giants. Despite his rugged, all-out playing style, in a full decade of NFL play he missed only two games.

Maher never was named to a Pro Bowl. Curiously, he never scored a touchdown in the NFL, though he did retire with three safeties to his credit, a record at the time that he shared with four other players. He always considered the first of those safeties his most memorable moment. It occurred just a few games into his rookie season, when he opened the scoring on Thanksgiving Day by blocking Boyd Dowler’s punt for a safety as the Lions rolled to a 23-10 victory over Green Bay.

After leaving the NFL, Maher started a successful telecommunications firm, eventually settling in Wisconsin. When it came to combining football and baseball careers, he certainly was no Bo Jackson or Deion Sanders. He simply was a hard-nosed gamer named Bruce Maher, and that was good enough for the Lions and their fans in the 1960s.