“Showboat” Fennis Dembo could have been a true Bad Boy 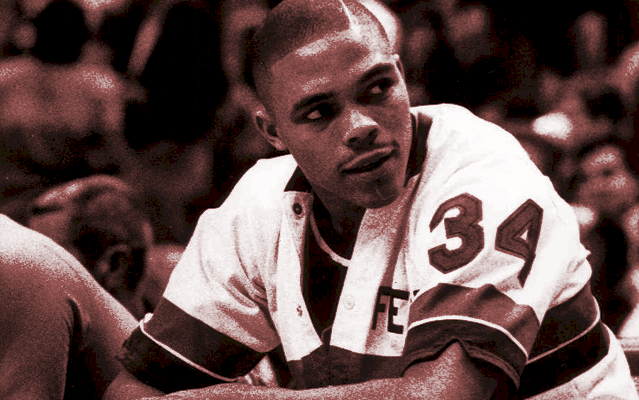 In his rookie season, Fennis Dembo won an NBA title as a member of the Detroit Pistons.

He would have been a good Bad Boy.

But it takes more than personality and presence to make an NBA player.

That’s why the high-flying and fun-loving Fennis Dembo never became a star member of the Bad Boys after being drafted by the Detroit Pistons with their first pick in the 1988 NBA Draft.

In college at the University of Wyoming, Dembo earned a reputation as a flamboyant show-stopper who could rise for a rim-rattling dunk, streak down the floor on a fats break, or rip rebounds from high in the gym. Never shy at showing his love of the game and his emotion, Dembo liked to engage with the crowd and reveled at egging on his opponents.

By the time his four-year collegiate career had concluded, the 6-foot-6 guard was Wyoming’s all-time leading scorer and rebounder, and second all-time in assists. He was the Western Athletic Conference player of the year as a junior. That season he led the Cowboys on a magical run to the Sweet 16 in the NCAA Tournament. As a 12th seed, the Cowboys upset West Virginia in the opening round then cast aside favored UCLA in a 78-68 spanking. Dembo was the star, hitting seven straight shots at one point against the Bruins in the second half. His 27.8 PPG was the top figure in the tourney. Wyoming’s Cinderella run ended at the hands of UNLV, but Dembo had claimed his star in the NCAA basketball universe. That fall he appeared on the cover of Sports Illustrated, the first athlete from the school to receive the honor. Dembo wore a cowboy hat and boots under the title “A Dazzling Dude.”

Despite not having the purest or prettiest of jump shots, Dembo averaged more than twenty points in his last two seasons in college. In spite of that, or perhaps due to his ability to slash to the hoop and his enthusiasm, Detroit’s front office had their eye on him.

“I think we’re very fortunate,” Jack McCloskey said. “This guy has some charisma and he’s a very fine player. He’s a good ball handler, a good shooter — not a great shooter — but a good shooter who I think will improve. He’s a competitor, and we like competitors.”

The Pistons were poised for greatness, having just come off their first trip to the NBA Finals in 1988, losing to the Lakers in seven hotly-contest games. It was a veteran-led team, with back court stars Isiah Thomas and Joe Dumars firmly in place. Sharpshooting scoring machine Vinnie Johnson filled out the three-guard rotation.

Ultimately it was the greatness of that trio and Chuck Daly’s eight-man rotation that led to Dembo being a spectator on the Detroit bench. But at first, Fennis had high hopes.

“The Pistons like to run up and down the court,” Demob told reporters from his home in San Antonio after learning he was picked by Detroit. “That will fit my game well.”

It wasn’t lost on Dembo that the Bad Boys image might be a good fit for his style of play too.

“Dennis Rodman is my boy, I love that enthusiasm,” Dembo said.

“I don’t want to say he’s a hot dog, but he has been referred to by that term,” McCloskey said of the newest Piston.

As a Cowboy, Dembo was know for waving his fists and pointing to the crowd to get them going. “Basketball ain’t nothing but a show, anyway,” he said. “Showboat, hot dog, I’ll take any name they give me. They’re all compliments. The fans love to hate me.”

The fans love to hate me. That’s an apt description for the Bad Boys, but Dembo wasn’t able to crack the lineup in his tenure with the team.

As a rookie, Dembo had his eyes opened in his first camp with Detroit. Thomas and Laimbeer, the two main leaders of the team, greeted him the way they welcomed every new piece of meat. Isiah beat the rookie all over the court, dribbling circles around him. Laimbeer swung his hips and elbows into Dembo any chance he could.

But to his credit, Dembo proved to be fairly resilient. He made it through camp without any breaks (to his bones or his spirit). As a result, Daly named him to the roster when the 1988-89 season opened in November. In the first game of the season at Phoenix, Dembo got into the game late with the Pistons well ahead. He hit his first little running jumper and was later fouled, converting both free throws. His first game was in the books with four points next to his game. But playing time was hard to come by on the talented team. A month later the rookie got six garbage time minutes and grabbed five rebounds in a loss to the Bucks. A week later he scored eight points in a lopsided loss in Cleveland. The Pistons were playing uneven in the first few months of the season, but Daly didn’t have any plans for his rookie guard, outside of him getting thrashed in practice by Dumars, Johnson, and Thomas.

Dembo got into 31 games as a rookie, serving essentially as the 11th man on the roster. For much of the year he sat at the far end of the bench next to veterans Darryl Dawkins and John Long, who showed him how to adjust to the NBA. When the playoffs came, Dembo was on the roster and saw action in two games. Most exciting for the 23-year old, he was waved in to the first game of the NBA Finals against the Lakers by Chuck Daly late in the fourth quarter. Dembo didn’t score in the Finals, but for a few minutes he was shoulder-to-shoulder with Magic Johnson, James Worthy, and the mighty Kareem on the hardwood at The Palace of Auburn Hills in the NBA’s biggest showcase. When the Pistons finished off the Lakers a few days later, Dembo was a world champion, soaked in champagne. Would it always be like this?

His brief appearance in Game One of the 1989 NBA Finals proved to be the last time Fennis Dembo played in the NBA. Four months after celebrating with his teammates, Dembo was released by the Pistons. Daly and his assistants had given up the notion that Dembo could replace Johnson as a scoring threat out of the back court. With Isiah, Dumars, and Vinnie, plus Rodman, Laimbeer, John Salley, Mark Aguirre, and James Edwards, the team didn’t have the minutes to give to a young, unproven player.

Dembo signed with a European team and played overseas for several years. He held on to his dream of being an NBA player for another decade before finally retiring in 1998. Dembo lives in his native San Antonio, and while he may seem like a footnote in Detroit sports history, he did earn a ring as a member of a championship club and will always be a part of the Bad Boys.