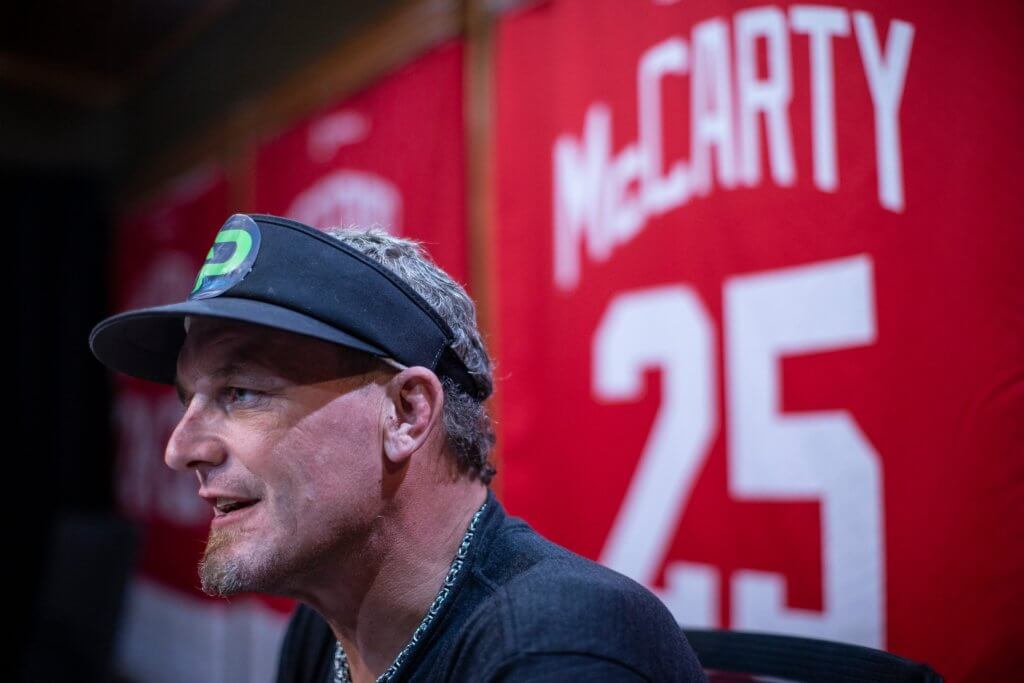 Four-time Stanley Cup Champion and Red Wing fan favorite Darren McCarty will share stories as part of his comedy routine benefitting the Detroit Historical Museum this Thursday, February 6th from 5:30 to 10 PM at the museum.

From 6 to 7 PM fans will have the opportunity to grab a burger with Darren at the Museum’s “Lindell AC” exhibit before he takes the stage to perform his comedy act from 7 to 9. McCarty will then sign autographs from 9 to 10.

As one of the all-time great Red Wing enforcers, for 12 seasons McCarty formed the famous “Grind Line” with Kris Draper and Kirk Maltby. The Windsor native is especially remembered for pummeling Avalanche bad boy Claude Lemieux after a massive donnybrook broke out between the Wings and arch rival Colorado on March 26, 1997 at Joe Louis Arena. The fight was in revenge for the dirty hit by Lemieux on Draper that seriously injured the Wing in the previous year’s playoffs.  McCarty would then score the overtime game winning goal in the contest that inspired the Wings for the remainder of the season as they went on to win the Cup after a 42-year drought.

It was McCarty who would score the Stanley Cup winning goal against the Flyers when he faked out a Philadelphia defenseman inside the blue line, and swooped around him before doing a quick cutback in front of goalie Ron Hextall to score. (I guarantee you will not see a prettier goal.)

The optional, casual dinner will be held in the “Lindell AC” exhibit that documents the history of “America’s First Sports Bar”. The famous Detroit institution, torn down in 2002, was run by the Butiscaris brothers and served as a hang-out for players, entertainers, and rabid fans. The exhibit features the original famous photos and some of the sports memorabilia that once adorned the bar. The exhibit opened last April and the final day will be March 15th.

Tickets for the McCarty event are limited. General admission is $30 (with dinner $50). For a short time the museum is offering a “two for one” special. Use code BOGO. Tickets are available at www.detroithistorical.org and on Eventbrite.

The Detroit Historical Museum is located at 5401 Woodward Avenue at the NW corner of Kirby St., kiddie corner from the Detroit Institute of Arts. Doors open at 5:30 for dinner attendees and at 6:30 for the show only.