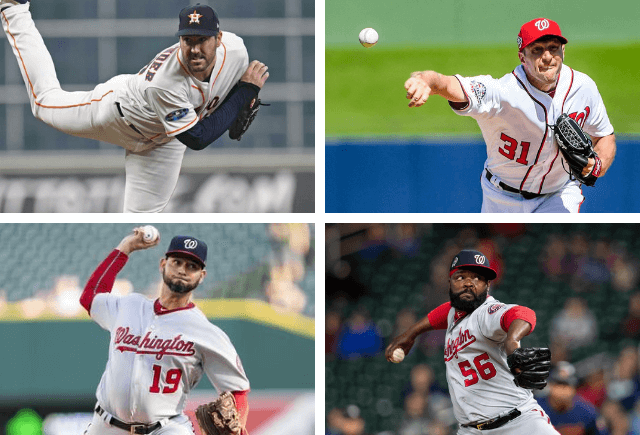 When will a Detroit Tigers’ pitcher start a World Series game again? Fingers crossed…but it might be a few years. It’s a long, long way from 114 losses to the Fall Classic.

But this October Tiger fans will see several former Tigers on the mound in the 2019 World Series, including a few of the best pitchers of this generation.

The Houston Astros will host the Washington Nationals in Game One of the World Series on Tuesday evening. This will mark the first appearance in baseball’s big dance for a Washington team since 1933. Back then, FDR was in the White House, and under Prohibition, it was illegal to drink a beer at a baseball game. Yikes, that sounds dreadful (the beer part, not the FDR part).

At any rate, the Nationals have three former Tiger pitchers on their World Series roster: Max Scherzer, Anibal Sanchez, and Fernando Rodney. The Nats have yet to announce their pitching rotation, but Scherzer will almost certainly start one of the first two games of the Series, and Sanchez will likely be in the mix somewhere too. Rodney will come out of the bullpen.

Justin Verlander, the greatest starting pitcher to ever wear the Old English D (sorry Prince Hal Newhouser and Jack Morris, not to mention Mickey Lolich), will start Game Two on Wednesday. For Verlander it’s his fourth trip to the Fall Classic, and Detroit fans may remember he was a greenhorn the first time.

Remember the 2006 season? Seems like ancient history, doesn’t it? That magical summer the Tigers rolled out to a huge lead in the AL Central and survived to make the playoffs as a wild card. A large portion of their success came from the efforts of a young pitching staff that included Verlander, a rookie. After the Tigers beat the Yankees and A’s in the playoffs, they sent Verlander to the mound to start Game One of the World Series against the Cardinals.

Verlander is a different animal now. At that time he was a fresh-faced rookie with an uncertain (but promising) career ahead of him. Since that first World Series start, JV has won the an armful of awards: Rookie of the Year, Cy Young, Most Valuable Player, and MVP of the League Championship Series. All of those honors came with the Tigers except the last one, which he earned two autumns ago with Houston. That fall, in 2017, Verlander finally won a World Championship, but in a strange blue and orange cap.

Since the Tigers traded Verlander only seconds before the trade deadline, he’s added several lines to his impressive résumé. He’s 42-15 in the regular season with the Astros, and he added a third no-hitter this year. They may as well reserve the wall space in Cooperstown for Verlander’s plaque.

Another former Tiger with a future date in Cooperstown is Scherzer, the man they call “Mad Max.” Scherzer left the Tigers after the 2014 season via free agency. Failing to make a decent offer to Scherzer after that season is one of the dopiest things former owner Mike Ilitch ever did. And Ilitch did a lot of dopey things. I know you’re never supposed to speak ill of the departed, but Ilitch really flubbed the Scherzer negotiations. As a result, Tiger fans have been forced to watch Max pile up big numbers in the uniform of the Nationals.

Entering his first World Series with Washington (Scherzer, like JV, also pitched in the 2012 Fall Classic for Detroit), Scherzer is still firing his fastball upwards of 100 miles per hour. Since exiting the Motor City, Max has thrown not one, but two no-hitters, and he won the NL Cy Young Award in 2016 and 2017. He’s one of the most competitive players in the game, and the thought of a Verlander/Scherzer matchup in the World Series causes drool to form in the corner of my mouth.

Once upon a time, the Tigers had a superb rotation that featured so many aces it seemed like they were counting cards in Vegas. From 2012 to 2014, in addition to Verlander and Scherzer, Detroit had Anibal Sanchez in their starting rotation. Sanchez was overshadowed by the large personalities on the team, but he held his own. He once struck out 17 batters for the Tigers, which remains a franchise record. In 2013 it was Anibal, not JV or Mad Max, who led the American League in earned run average. That season, Sanchez, Verlander, and Scherzer all topped 200 strikeouts for the Tigers.

Fans in Detroit will recall that Sanchez struggled with his pitches in his final years in a Tigers’ uniform. he had arm trouble, was briefly sent to Toledo to find his way, and he got shelled for a long time. In his last two seasons as a Tiger, Sanchez’s ERA was over six runs per game. Ouch.

But Ani has always been one of the nicest guys in the game, which is why it’s heartwarming to see that his career has been resurrected since leaving Detroit two years ago. Last season he latched on with Atlanta ans posted an ERA under 2.90, and this year he inked a deal with the Nationals. Even with that solid season in 2018, the folks in D.C. weren’t sure what to expect from the Venezuelan righthander. But he added depth to their rotation, filing in behind Scherzer, Stephen Strasburg, and Patrick Corbin as perhaps baseball’s most effective #4 starter in 2019. In the League Championship Series, Sanchez used his methodical pitching motion and devastating sinker to stymie the Cardinals. He took a no-hitter in the eighth inning and established himself as a dangerous postseason weapon.

The word “crooked” is supposed to be a bad thing. Like, “I bought that car from a crooked salesman, ” or “My brother is a nincompoop, a real crooked character.” And so on.

But Fernando Rodney’s “crooked” cap is so bad it’s good. The sideways cap is Rodney’s trademark, along with a bizarre arrow shooting pantomime he does when he saves a game. No, Rodney isn’t a cast member from “Game of Thrones,” he just acts a like it. He’s been a reliever-for-hire for close to two decades now, wearing the cap of eleven major league teams, all of them very crooked.

Rodney doesn’t save games any more, he only had two since signing with the Nationals in June. Now he’s a situational righty, if you will, using his famous changeup to get outs in tight spots. He’s still a tightrope act, but there’s no denying that the flamboyant reliever is exciting to watch.

Should the 2019 World Series go six or seven games, it’s virtually certain that we’ll see JV and Scherzer make two starts each. A clincher game might even result in one or both of those aces making an appearance from the bullpen. Scherzer has pitched in relief twice in the playoffs in the last two season. As for Sanchez, who knows which game he will start in this Fall Classic, but my money is on Saturday’s Game Four in D.C., where the crowd will be pouring it on in his favor.

Tiger fans have nothing to cheer about this October, you say? Hogwash. With four former Tigers on the rosters of the league champions, the 2019 World Series will be a walk down memory lane for Detroit fans.

Who do you think will win the 2019 World Series? Which former Tiger are you rooting for? Tell me in the comments section below.