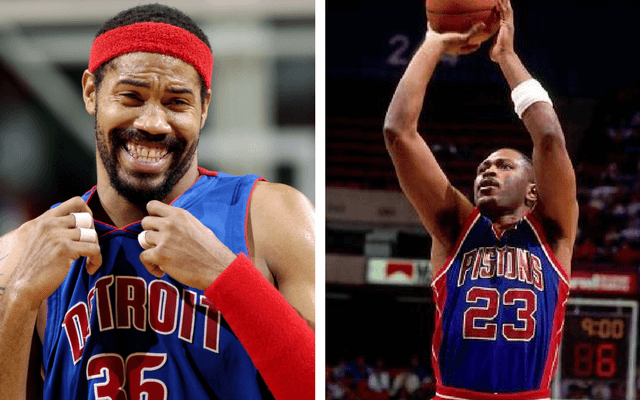 Trades that brought Rasheed Wallace and Mark Aguirre to the Detroit helped the Pistons to NBA championships.

The Detroit Pistons have made trades in the past that have led to championships.

Some of their trades have blown up in their face.

And some have been in the wide spectrum in between. That is what happens in trades. You never know how things will work out.

When the Pistons traded Adrian Dantley for Mark Aquirre in 1989, it was a risk. Dantley was a proven scoring champion and Aquirre had some issues. But the personalities in the clubhouse meshed and it led the “Bad Boys” Pistons to two championships.

In the next edition of the “Bad Boys” in 2003-04, GM Joe Dumars traded for Rasheed Wallace, who proved to be the final piece of the puzzle the Pistons were needing after getting stopped in the Eastern Conference Finals year after year.

Another underappreciated piece to that trade was getting Mike James from Boston along with Wallace from Atlanta in the three-way deal. The Pistons had to give up Lindsey Hunter, but James played well as a part-time guard, the same role Hunter had filled. Of course, the Pistons benefited greatly from the scoring and leadership brought to the team by Wallace.

There were several other pieces that needed to fall into place before that deal, many of them via the trade route. And unfortunately there were several afterward that slowly dismantled that entertaining championship team.

The 2004 title team really started with a trade that ended an era and began another. Longtime Pistons star Grant Hill was a great player, but had little around him, especially after Dumars retired as a player. As the Pistons looked to rebuild, Hill was shipped to the Orlando Magic for Ben Wallace and Chucky Atkins.

Atkins would be a good role player for the Pistons before leaving the team in the three-way trade that brought Rasheed.

But acquiring Ben Wallace in 2000 was the foundation that became an NBA championship team.

Wallace, a relatively unknown college player out of Virginia Union, went undrafted and signed as a free agent with the Washington Bullets in 1996. Three years later, he was traded to Orlando and got his first chance to play. He actually started 81 games for the Magic and averaged 4.8 points and 8.2 rebounds per game.

The Pistons saw something in him and took a risk by trading Hill. It is always a risk trading your franchise face.

But this one worked out for everyone. Wallace would see his scoring average rise to the 7-9 points per game range but his rebounding skyrocketed. His first year in Detroit, he averaged 13.2 rebounds per game, then the next two years Big Ben led the NBA in rebounding at 13.0 and 15.4 per game, respectively. He would average double digits in rebounding for his first seven years in Detroit, doing a pretty good imitation of the the Pistons’ former wormy rebounding marvel, Dennis Rodman. He also led the league in blocks per game at 3.5 his second year. He was named the NBA Defensive Player of the Year four times and was a six-time all-defensive team member.

That defense became the cornerstone of the new-look Pistons.

The next big trade came two years later when the Pistons got Richard Hamilton in a trade for Jerry Stackhouse. Hamilton was the jump-shot middle-range specialist that every team seemed to be lacking and he complemented the style of play of newly signed free agent point guard Chauncey Billups.

The next big trade for the Pistons involved Billups, too, but it came after the title and it put the brakes on Detroit’s dynasty hopes. Billups, Antonio McDyess, and Cheikh Samb were traded for Allen Iverson.

It was the end of the next championship era in Detroit.

Iverson averaged 17.4 points per game in 2008-09, playing 54 games with the Pistons. Unlike when Hill was traded to begin a new era with Wallace, the controversial Iverson played only that season in Detroit and the Pistons have struggled to become a playoff team since.

The right moves are out there, but it takes the right timing, the right price and the right blend to create a championship team.

The Pistons have had it before and will again, but all of those factors need to line up for that to happen.