History points to Cabrera bouncing back with a good season 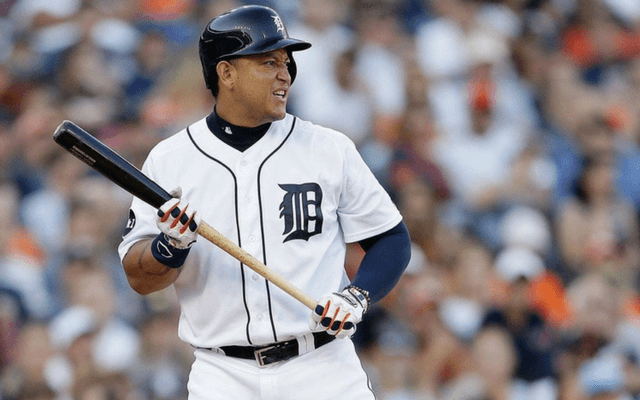 After hurting his back in the World Baseball Classic last March, Miguel Cabrera had the worst season of his career in 2017. He’s reported to spring training slimmer and healthy.

The 2017 season was a nightmare for Miguel Cabrera. Some of that nightmare was his own making, which I won’t go into here. I’ve never been a sportswriter who felt my job was to drudge up an athlete’s personal off-field life.

But Cabrera also suffered at the hands of fate: he hurt his back while playing for Venezuela during the World Baseball Classic. The injury was more severe than he (or the Tigers) let on and it bothered him all season. Cabrera played in a lot of pain last season, he had a difficult time getting his bat through the strike zone on fastballs and opposing pitchers realized he couldn’t get out on the edge of the plate at all and took advantage.

As a result of his injury and the off-field problems that surely wore on him mentally, Miggy had his worst season as a professional, as his power and plate coverage plummeted. He was uncomfortable on the diamond, but he gamely fought through his pain to play in 130 games. Cabrera has always believed it’s his job to play baseball, even if he’s not 100 percent. Faults he may have, but Miggy thinks he should earn his multi-multi-multi-millions in uniform. His OPS dove from 956 in 2016 (near his career average) to just 728 last season. The team mercilessly shut him down with a week to go in the season. He had hit only three homers since late July.

For the first time since he joined the Tigers ten years ago, Cabrera enters spring training with something to prove. He also enters an unfamiliar spring setting: he’s the last man standing with a new manager and several new (lower-paid) teammates. With Justin Verlander gone, Cabrera is the true face of the franchise for the first time, and on top of that pressure and the pressure of rebounding from his worst season, he’ll also learn to play under Ron Gardenhire, the grizzled but gregarious new Tiger skipper.

With all of these new factors, what should we expect from Miguel Cabrera in 2018? A few weeks into the season the former Triple Crown winner will turn 35, still a young fella by normal standards, but getting a little long in the tooth for a pro athlete.

But if history is any guide, Cabrera still has plenty of great baseball in him, based on the production from other great hitters in their mid-30s. Cabrera has clearly established himself as one of the greatest hitters of all-time, and easily one of the 2-3 best hitters of the last 30 years at least. His sustained ability to hit for a high average, hit for power, and get on base, is rare. That’s why he became the first player in 45 years to win the Triple Crown in 2012, leading the league in batting, homers, and RBIs. In his first eight seasons as a Tiger, Miggy led the AL in at least one of the triple crown categories in six of those seasons. There’s a reason he’s one of the elite players in Tiger history: since joing the franchise he’s won four batting titles, two home run titles, and led the AL in RBIs twice. He’s also posted the best slugging percentage in the loop twice and led in on-base percentage four times.

A hitter like Cabrera should be compared to players of his caliber. I looked at what every Hall of Fame first baseman (since 1946) did in their age 35 season. (Actually I examined any Hall of Famer who played first base in at least 75 games in his age 35 season, which returned a few players who were not first baseman their whole career, but that really doesn’t matter for the purposes of this study). The table below shows the results for 16 players who matched my criteria.

The players are ranked by OPS (on-base percentage plus slugging). Only a handful of these future Hall of Famers had a bad season (by their standards) at the age of 35. Murray was having an off-year, he would hit more than 100 more homers on his way to 504 for his career. Mathews, typically a first baseman, was aging out of the league and only had one more season left (part of which he spent as a bench player for the ’68 Tigers). Like Murray, Banks was in a little one-season rut, but he came back to hit about 90 more homers over the next few seasons and lift himself into the 500-homer club. (Miggy by the way, needs only 38 homers to join that group).

Battling back problems, Yastrzemski is an interesting comp to Miggy: mid-30s former triple crown winner who was entering the final phase of his career. Yaz was hardly done: he was an All-Star at age 35, and again at 35, 37, 38, and 39. He drove in 100 runs at age 36 and age 37 and received MVP votes in each of those years. He was still a potent offensive player at age 40, though injuries robbed him of his effectiveness. Cabrera has access to far more medical knowledge and fitness expertise to withstand the rigors of getting older. 40 is the new 30.

Many of the future Hall of Famers in this group were still hitting home runs, driving in runs, and posting slugging percentages well above .500 even as they drifted into their late 30s. Killebrew led the league in RBIs, as did Musial for the Cardinals. Big Jawn Mize was still a monster at the plate at age 35, smacking a leag-best 40 homers in one of his best seasons. Greenberg did him one better: the original Hammer played his first full season in six years in ’46 (having missed the prime of his career in World War II) and led the league with 44 homers, winning his fourth home run title for the Tigers. Hank was still a fine slugger at age 36 when he changed uniforms to play for Pittsburgh. He retired after that season not because he was done swinging the bat, but because he wanted to focus on his business interests. The big guy could have swatted another 75-100 homers if he’d stayed on the field.

Eleven of the sixteen players in this study had an OPS above 800, which regardless of era is a fine season at the plate. Cabrera has a 957 OPS since joining the Tigers, and it’s likely the righthanded slugger will return to that neighborhood in 2018. Last season he had just 38 extra-base hits, but in his decade wearing the Old English D, Miggy’s averaged 75 a season. Assuming his back and legs are healthy again, at 35, Cabrera should have little trouble being at his normal level.

Cabrera worked with a world-renowned fitness trainer in the off-season in Florida, the same guy who trains Lebron James. He shed weight, got quicker, and worked on strengthening his core. He reports that the pain he experienced in 2017 is gone. The Tigers could have traded their superstar slugger last year when they gutted the team for the rebuild. But they held on to him because fans have to have someone to cheer for. Because Cabrera when healthy is as dangerous as any hitter in the game. Because Cabrera plays with childlike enthusiasm. And because he’s approaching milestones (500 homers, 3,000 hits) that can put butts in the seats.

Triple crowns are in his past, and batting titles might be too, but Cabrera is one of the all-time greats with a baseball bat in his hand. I wouldn’t bet against the big guy having a comeback season in 2018.