Jack Morris was “wild” for a reason 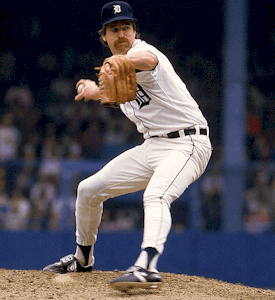 When we look back on the great career of Jack Morris, what stands out is his ranking on some of the all-time Tiger pitching lists.

His 198 victories in a Detroit uniform place him fifth in club history.

He is second in games started (again, behind Lolich) with 408 as a Tiger.

He ranks fourth among all Tiger pitchers with 3,042 innings.

But there is one category in which he stands alone at the top.

It is wild pitches.

In his 14 seasons in the Motor City, Jack Morris threw a whopping total of 155 of them. Lolich is second on the Tiger list, having thrown 109 wild pitches.

It is a dubious distinction, indeed. Morris, in fact, threw 206 wild pitches over his entire 18-year career with the Tigers, Twins, Blue Jays, and Indians.

For the record, he is 13th on the all-time major-league wild pitch list.

But we need to put that in the proper perspective.

Who are the other 12 guys in front of Morris? Well, ten of them played all, if not the majority, of their careers in the 19th Century. Back in those days, baseball equipment was primitive, to put it mildly. Fielders, including catchers, wore only simple leather gloves with no padding, usually with the fingertips cut off. Try catching a fastball, or an elusive curve, wearing one of those. To make matters worse, catchers didn’t wear shin guards (those were first donned in 1907).

Can we forgive those early backstops if they missed a few balls? And usually the pitcher was credited with a wild pitch, which explains the high totals for that century (The all-time wild pitch leader is a fellow named Tony Mullane, who threw the astounding total of 343 in his 13-year career, including 63 in 1884 with the Toledo Blue Stockings.).

In what historians refer to as baseball’s Modern Era, however (that is, post-1900), only two hurlers have thrown more career wild pitches than Jack Morris.

Interestingly, both of them were contemporaries of his.

The modern leader in wild pitches is Nolan Ryan, who tossed 277 in 27 years with the Mets, Angels, Astros, and Rangers. Phil Niekro, who pitched 24 seasons, mostly with the Braves, threw 226 wild pitches. The presence of both of them on this list comes as no surprise. Until he gained more control late in his career, Ryan had a reputation for wildness, and Niekro was a knuckleball pitcher, which is all you need to know.

The reason for Morris’s high wild pitch total was his split-fingered fastball, which also happened to be his bread and butter. Roger Craig, the Tigers pitching coach in the early 1980s, helped Morris learn how to throw it effectively.

While a devastating pitch, it could sometimes be hard to control, and compounding the problem was that Morris threw it so hard.

But it would be incorrect to call him a “wild” pitcher. Only one year did he walk more than 100 batters. (Ryan, by contrast, twice issued over 200 free passes in a single season.).

Ryan, Niekro, and Morris are the only three modern-day pitchers to throw over 200 wild pitches in a career.
Six times, Morris led the American League, including a career-high 24 in 1987, a year in which no one else in baseball threw more than 14.