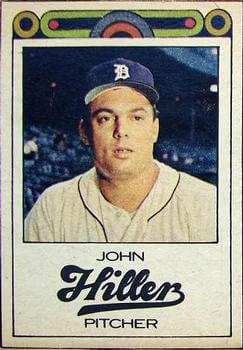 John Hiller became an important part of the bullpen for the Detroit Tigers in 1967, a tumultuous year for the city of Detroit.

John Hiller was one of the most beloved Tigers.

That happens when you do your job, do it well — and even come back from a heart attack in the middle of a career.

Much has been written about Hiller’s comeback from the Jan. 11, 1971 heart attack, which was astonishing.

But it is his debut which isn’t often written about. Actually it is written about a ton, but not through Hiller’s eyes.

Hiller’s first major league victory was July 23, 1967 — the first huge night of the Detroit riots. It was the game Willie Horton left from in uniform to try to stop some of the violence.

Hiller pitched 2 1/3 innings of relief, also knocking in Norm Cash and Mickey Stanley with a single of his own.

Last week was the 50th anniversary of the riots, and also Hiller’s first win. He was on hand with the West Michigan Whitecaps as part of their Tiger Fridays series to mark the occasion.

He recalled how scary that night was.

“We didn’t know after that game that they came and told us that we can’t leave the ballpark,” Hiller said. “We were there until about 3 in the morning. I know that they were rioting in Toledo too. Checked with our wives, everything was cool there. We got up near the roof and you could see the smoke there, coming from the city. It was scary, of course it was.”

It started at a “blind pig” and lasted four days. Forty-three people were killed, along with 1,189 injuries, 7,200 arrests and more than 2,000 buildings destroyed. Damages were estimated at $40-45 million at the time.

The uproar caused the Tigers to move a three-game series out of town.

Mickey Lolich was part of the National Guard that was called in.

“The scariest thing was when he came back and he said he saw a tank level a building (that) snipers were coming from,” Hiller said of Lolich.

The year of upheaval in Detroit ended with Hiller and the Tigers losing on the final game of the season, missing the pennant by a single game.

Of course, the following year, Hiller was part of the 1968 championship team.

“It was my second year in the major leagues, we came within one game the year before of getting into the series, I think it was just special being there, watching how the veterans, Al Kaline, Willie Horton, Bill Freehan how they reacted,” Hiller said. “I wasn’t instrumental, as everybody knows it was the Mickey Lolich show, from the pitching standpoint, great hits, great timing.”

Just as things were going so well for Hiller, the 1971 heart attack caused him to miss an entire season. He was lucky to be alive.

“I think it was scary for the fact that I didn’t know if I’d ever play again,” Hiller said. “In a way the same thing, I was a young man, didn’t have much pension time, wasn’t making any money, no education and that was my motivation to get back, I needed to do something to feed my family.”

He earned the American League Comeback Player of the Year award in 1973. He also finished fourth in Cy Young and MVP voting.

But there was nothing like arriving in Detroit during the riots.

“Back then in the ’60s, stuff didn’t happen then and then all of a sudden the city’s at war almost,” he said. “Awful scary.”