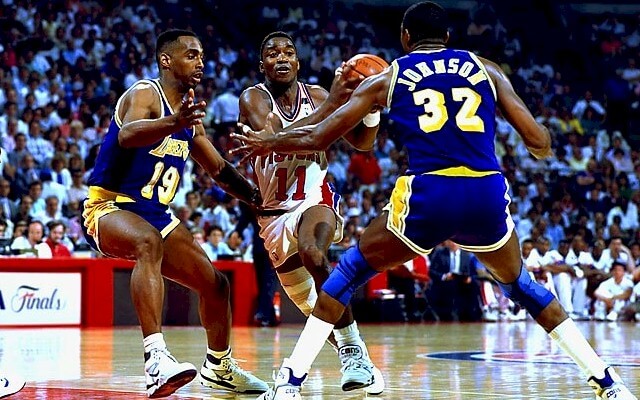 Isiah Thomas drives to the basket against Tony Campbell and Magic Johnson in the 1989 NBA Finals.

This is the second in a series that looks at the greatest moments in the history of The Palace of Auburn Hills, home to the Detroit Pistons since the 1988-89 season. The team will leave the arena at the end of the 2016-17 season.

The Lakers never had a chance.

The first NBA Finals game played at The Palace of Auburn Hills was like surgery. Isiah Thomas made the incision early, and Joe Dumars was the knife-wielding surgeon late in the game, cutting out the hearts of the Lakers, who hadn’t lost a game in the entire postseason. Detroit, who by their own admission had been waiting 12 months for a rematch with Los Angeles, won handily 109-97 to open the 1989 NBA Finals.

“You’ve just seen us play our best game of the playoffs,” Chuck Daly said after the impressive victory.

Days earlier, the Pistons had vanquished the pesky Bulls, beating them in six games after having dropped the opener to Chicago on the same Palace floor. That loss, to a man, pissed them off. It pissed off Bill Laimbeer, it pissed off James Edwards, it pissed off Dennis Rodman, it pissed off Isiah and Joe Dumars, and it even pissed off Mike Abdenour, the lively equipment man who regularly lost his voice screaming encouragement to the team.

“After [the loss to the Bulls in Game One of the Eastern Conference Finals] our team was in a bad mood,” Abdenour recounted years later. “There was no way anyone was going to stop them from facing the Lakers again.”

In the ’88 NBA Finals the Pistons had lost on seven grueling games, missing an opportunity to close out the series in Game Six on the Lakers’ court. That loss haunted Isiah and Co., and it hung over them like a damp blanket all season.

“It’s like we’ve been waiting to get to this game since last year at this time.” Isiah told reporters after the Game One rout of the Lakers. “When we began training camp this season, it was like we didn’t even want to play the regular season, we just wanted to go back and pick up in the Lakers series and get another chance at them.”

Thomas scored 24 points, many of them in the first minutes of the game, and dished out nine assists. Dumars poured in 22, several of them in the third quarter when the Pistons buried the Lakers and decided the game. The two were all over the floor, pestering Magic Johnson and causing Michael Cooper to get into foul trouble. It looked like Thomas and Dumars were moving at a faster speed than the Lakers’ back court.

The Lakers were 11-0 in the playoffs entering the game and shooting for a “Threepeat,” but it was obvious immediately which team was superior.

“What you’re seeing now is experience,” Dumars said in a subdued, business-like post-game press conference. “We’ve been here and we know what it takes to win. We have one [win] and we will go play the next game.”

The Pistons won that next game at The Palace too, and the next one in LA, and the next one (Game Four). They swept away the “Showtime” Lakers in the ’89 NBA Finals for their first championship. Magic Johnson was hurt in Game Two and would not return for the Lakers, but his presence in the lineup wouldn’t have changed the outcome.

Great teams will not be denied, and the 1989 Detroit Pistons were a great team.