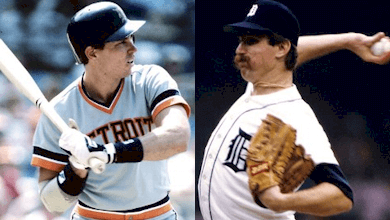 Alan Trammell and Jack Morris were teammates from 1977 to 1990 with the Detroit Tigers. Both are on the Baseball Hall of Fame’s Modern Era Ballot, and results will be announced next week.

There have been a lot of things written about the upcoming Modern Era Hall of Fame ballot, which will be voted upon on Dec. 10, even things on this site.

So forgive me for diving into this upcoming vote again, but it is a huge deal for Detroit Tigers fans — huge.

We have already discussed how former Detroit Tigers Alan Trammell and Jack Morris were named as two of the top 10 finalists on the ballot, and also how stunning and disappointing it was that Lou Whitaker was left off of the list of 10 completely.

Now that the vote is rapidly approaching, it is time to discuss what should happen and what probably will happen, and these are different things, unfortunately.

Before we jump to the possible outcomes, let’s look at the ballot. The top 10 finalists are Trammell, Morris, and in no particular order, Steve Garvey, Tommy John, Luis Tiant, Ted Simmons, Dale Murphy, Dave Parker, Don Mattingly and Marvin Miller.

Most of you are familiar with the cases of Trammell and Morris, so I will be brief.

Trammell was a dominant shortstop that was completely overshadowed by playing at the same time as Cal Ripken Jr. and Robin Yount in the American League. Both won multiple MVP awards and reached 3,000 hits, making the Hall of Fame on the first ballot.

He was a World Series MVP, four-time Gold Glove winner and had nearly identical statistics to Whitaker, Larkin and Ryne Sandberg.

Morris has been one of the most polarizing candidates in the history of Hall of Fame voting. He seems to be the posterchild of the old guard, not wanting to give in to sabermetrics. He was a durable, dominant pitcher that on the flip side pitched in a transitional era for starters. Finishing up during his prime were pitchers like Tom Seaver, Steve Carlton, Phil Niekro, Gaylord Perry, Don Sutton and Nolan Ryan — all 300 game winners.

On the flip side, pitchers just as or more dominant that had shorter careers started during his peak and pitched at the same time, too, like Dwight Gooden, Bret Saberhagen, Orel Hershiser, Dave Stieb and of course, Roger Clemens (which is a whole other issue).

Morris won 254 games, made five All-Star teams, started a ton of opening days and had some major postseason heroics. But on the flip side, he had a 3.90 ERA, which would be the highest of any starter in the Hall and his WAR is not impressive.

But this polarizing candidate still managed to get 67 percent of the writers vote before falling off the ballot just short of election.

My vote would be yes on Trammell and Morris.

If I had a vote for the Hall of Fame

Here is a quick look at the biggest pro and con of the rest of the ballot and my vote on if they deserve the Hall:

But … He was not a power hitter at first base, his WAR is surprisingly low — and I mean surprising (37.7 for his career, nearly identical with Dick McAuliffe).

My vote: No. In retrospect, his career just doesn’t look as strong as it did when he was playing. There are plenty of more deserving first baseman.

Tommy John: He was a durable left-handed started who won an impressive 288 games, many coming after a surgery that bears his name. Pretty good ERA at 3.34 and had a 60 WAR.

But … he pitched 26 seasons to accumulate that WAR and those wins, which averages about 11 wins a season. He pitched at the same time as Ryan, Seaver, Carlton, Perry, Sutton, Niekro, Fergie Jenkins, Bob Gibson, Sandy Koufax, etc., and was not as good as any of them.

My vote: No. He took a long time to amass those wins and that WAR. He wasn’t better than Morris or Jim Kaat or Luis Tiant for that matter.

Don Mattingly: “Donnie Baseball” was a popular player during his time. He was an MVP winner, nine-time Gold Glove winner and six-time All-Star finishing with a .307 career average before back problems ended his career prematurely.

But … Didn’t play long enough, had a relatively low WAR (42.2) and wasn’t really a power hitter at first base, which is always held against guys like him (ask Keith Hernandez).

My vote: Maybe, but too many ahead of him.

Marvin Miller: Was the head of the Major League Baseball Players Association and completely changed the game to give the players more labor power.

But … but nothing. He was incredibly important to the game’s history. The only way he doesn’t belong is if the Hall didn’t elect non-players, but it has and he is a glaring omission.

Dale Murphy: The Braves centerfielder was seen as perhaps the best all-around player in the 1980s, earning back-to-back MVP awards, making nine All-Star teams and winning five Gold Gloves. Hit 398 home runs and in the top two for the 1980s in hits, home runs and RBIs. Member of the 30-30 club.

But … he lost it faster than any star in history, dropping off a cliff as the 1990s began after one of the most dominant decades by an outfielder.

My vote: Yes, he really was that dominant in the 80s.

Dave Parker: Was a two-time batting champion, MVP, seven-time All-Star and three-time Gold Glove winner. He had a cannon for an arm in right field and hit. 290 with 1,493 RBIs. He was a five-tool player.

But … He was a five-tool outfielder with a similar career to contemporaries Dave Winfield and Andre Dawson, who amassed more career milestones. … But the biggest thing is the 1980s cocaine issue in baseball, which Parker was a part of which definitely cost him votes because plenty of voters are looking for reasons not to vote for candidates.

My vote: Yes. I think if he didn’t have a cocaine issue, his vote total would have risen throughout his time on the writers ballot and he wouldn’t look like such a longshot.

But … he played at the same time as Johnny Bench, Carlton Fisk and Gary Carter and was not as good as any of them.

My vote: Yes. He is the catcher’s version of Trammell. Just because he wasn’t the best of his time doesn’t mean he wasn’t one of the best of all time.

But … he didn’t approach 300 wins, which many pitchers of his time did.

My vote: Yes. He pitched seven fewer years than Tommy John and had a higher career WAR. Also has nearly identical numbers to Hall of Famers Jim Bunning and Catfish Hunter, but has better WAR than both.

What really will happen

With all of these strong candidates, Marvin Miller should finally be elected along with at least one player, possibly two Detroit Tigers. If the voters are feeling more old guard, they might elect Morris and perhaps Tiant, if they are feeling more new stats, it might be Trammell.

If they are feeling like they want to look at peak value, they might elect Murphy and Parker … even Mattingly.

… What is going to happen is …

Let me preface this by saying I hope this doesn’t happen. But the way the committee votes have gone since 2001 is that only one player who played post-integration has been elected in the past 16 years and that is Ron Santo.

So the trend is that Miller finally gets in and that could be it. Let’s hope at least one player finally gets in, but with voters allowed to vote for just four people, there is an easy chance with so many strong candidates that the votes get split and no one makes it.

Even the players I wouldn’t vote for deserve to be on this ballot because they all have a case. This era has been so overlooked by the writers that there are players like Whitaker, Al Oliver, Dwight Evans, Bobby Grich, Bill Madlock, Dave Concepcion and Keith Hernandez who didn’t even make this ballot. They all have a case, too.

But everyone wins if a player or two gets elected, because otherwise, we will be disappointed and have to go through this same thing again the next time around. It is becoming too familiar of a bummer.