Little help from the front office doomed subpar Tigers in 2015 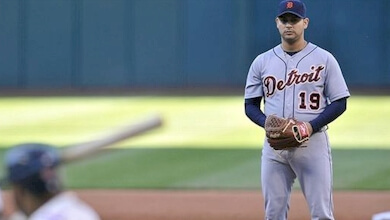 Anibal Sanchez is one of the many Tigers who disappointed in 2015. But the front office was unable to provide any help to shore up the holes on the team.

It’s hard to remember these days that this is the same season the Tigers started out 11-2 and looked like a potential world champion. Over their next 100 games, Detroit systematically dismantled that perception by going 43-57. That .430 winning percentage from mid-April through mid-August is worse than any American League team this season and better only than Colorado, Milwaukee, Philadelphia, and Miami.

How did the Tigers manage to go from a juggernaut to a bottom-feeder? Hindsight is twenty-twenty, and looking back there are some obvious blunders.

The Tigers let Victor Martinez play way too long on one leg. Their DH performed poorly, and his injury and his hitting got worse and worse, because he couldn’t push off on his weak leg, making it excruciating to watch him bat left-handed, and that weakened the middle of the order for weeks. He should have been put on the disabled list far sooner, but apparently he kept talking his manager into playing him. That hurt the team.

Also, the club was deceived by the initial outings of Alfredo Simon and Shane Greene into thinking this pair were solid starters. In fact, once opposing hitters solved Greene (and it didn’t take long), he was a punching bag. And while Simon can struggle into the fifth or sixth inning, once he hit around 100 innings for the season, he was revealed for what he really is: a good relief pitcher who belongs in the bullpen, not as a mainstay in a major league rotation for a full season.

The rotation needed fixing, but management kept hoping for way too long for Justin Verlander to return from his off-season surgery and associated injuries and then somehow rebound instantly into his old self. It looks like he’s OK now, but given his struggles and the inexplicable inconsistency of Anibal Sanchez, the Tigers operated for too much of this season with a starting rotation that consisted of David Price and a prayer. Adding another solid veteran starter or two—even someone in the category of a Mat Latos or a Dan Haren—might have stopped the bleeding. But curiously the club stood pat on starting pitching, relying instead on calling up mediocre minor leaguers to fill the rotation.

That same approach—standing pat and hoping to find replacements on the cheap or in their minors—was used when Miguel Cabrera went on the DL. Instead of going after someone like Brandon Moss or Michael Morse—in other words, some sort of a major league hitter—Detroit tried to get by with a proven failure (Marc Krauss, are you kidding?) and a prospect who wasn’t ready to make the jump to the bigs (Jefry Marte). Even absent a more meaningful move, the team could have gotten by with Alex Avila taking over first base and using Bryan Holaday as a back-up catcher, but management refused even to do that. It seems to me that the lack of a meaningful move in this case signaled to the rest of the team an unwillingness to spend a little to fix a problem or a lack of belief that the team could contend.

I haven’t even mentioned the bullpen, which has been a disaster all season. Manager Brad Ausmus stubbornly stuck with Joba Chamberlain and Tom Gorzellany. Management kept waiting for Bruce Rondon to come to the rescue and never got any real help for the bullpen until plucking Neftali Perez off the scrapheap—and then it was too little, too late.

Instead of fixing problems, the front office this year seemed to have been deceived by the fast start into thinking the team could right itself and weather the storms with a patch here and there. Instead of getting some real help when it was needed, the strategy all year seemed to be to hope the team would get its act together. I know Dave Dombrowski deserves accolades for all the big trades he made while at the helm of the organization, but what was he doing this year before he pulled the plug? Not much.

The ironic thing is, if those hopes of riding out the injuries and problems had materialized, even to the point of getting back to something close to .500 ball over that 100-game stretch, Detroit would still have had a shot at a wild card spot. Beyond Kansas City—and now the revamped Blue Jays—there just aren’t any dominant teams this year in the league. The Yankees are not really very good, and everyone knew the Twins would fade. Hell, even Tampa Bay is still in it.

While the Tigers continued to stumble, the door to the playoffs was still wide open throughout July. If they’d been buyers rather than sellers at the trade deadline, they could have added a starting pitcher and a reliever or two. With David Price presumably pitching it, the Tigers would have been a favorite to win the wild-card game. With everyone healthy again and some help for the pen, they could have made a deep run in the post-season.

But in July, the Tigers found too many ways to keep losing games, and the front office didn’t provide any real help when there was still hope. Detroit wasn’t as good as its 11-2 start indicated, but it shouldn’t have been as bad as a .430 club after that.