Livonia’s Modano is the best hockey player from Michigan 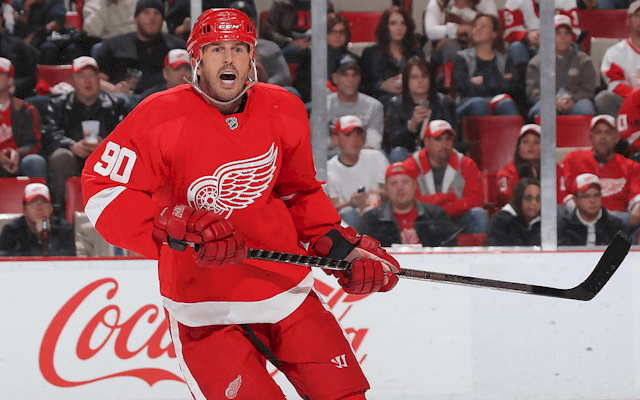 Michigan native Mike Modano played 40 games for the Red Wings during the 2010-11 season.

The NHL released its top 100 players in league history at last weekend’s All-Star festivities, commemorating the 100th year of the NHL. There were 28 players who played at least part of their careers in Detroit on the list of 100. Today: Mike Modano.

Michigan is one of the premier hockey states in the United States. It’s universities produce top prospects for the National Hockey League and regularly make the Frozen Four.

The state has produced talent of the highest level.

Mike Modano is the best example of this home-grown talent. Born in Livonia on June 7, 1970, he would go on to become the NHL’s all-time points leader by American-born players.

Some players are diamonds in the rough and some are can’t-miss prospects who bust. Modano was one of the few players who lived up to the hype. In 1988, he was drafted No. 1 overall by the Minnesota North Stars.

Modano went on to play four seasons with the Minnesota North Stars before the franchise moved to Dallas to become the Dallas Stars in 1993. That first year in Texas was the best year of Modano’s career. He scored a career-high 50 goals and tallied 43 assists.

He would score 557 goals and tally 802 assists in his career with the Stars, leading Dallas to a Stanley Cup title in 1999 with 34 goals and 47 assists.

But at age 40, Modano wasn’t quite ready to hang up his skates, so he returned home to join the Detroit Red Wings in 2010-11. It was a quick stop in his hometown, and somewhat disappointing, but an important finish, bringing his career full circle.

Modano played 40 games in Detroit. He was no longer the superstar center that was a seven-time All-Star with the Stars. He scored just four goals and totaled 11 assists, missing much of the season with a severed tendon in his right wrist.

When Modano returned, he played the final 20 games of the regular season, helping the Red Wings make the playoffs.

But in the playoffs, Modano was a healthy scratch for nine of the 11 games the Red Wings would play.

“I was just grateful for the opportunity to come back home and play in front of family and friends and play for a team that I obviously grew up watching for a lot of years,” Modano told Mlive.com in 2014. “It was an opportunity for a new chapter, just to go home and play but one that I don’t regret doing. It was a lot of fun. I got to play obviously with some great players, some world-class talent there in Detroit. Unfortunately it was cut short with my tendons in my wrist getting cut but I would have loved to have had another crack at another year or two there if I stayed healthy. But nonetheless another great stepping stone, another great chapter that is very memorable.”

Modano finished with 561 goals and 1,374 points — tops on the all-time list for American-born players and 24th and 23rd on the NHL all-time list, respectively. He would end up being elected to the Hockey Hall of Fame in 2014.

While it was a disappointing finish to his time in Detroit — and to his career—there was nothing quite like playing at home.