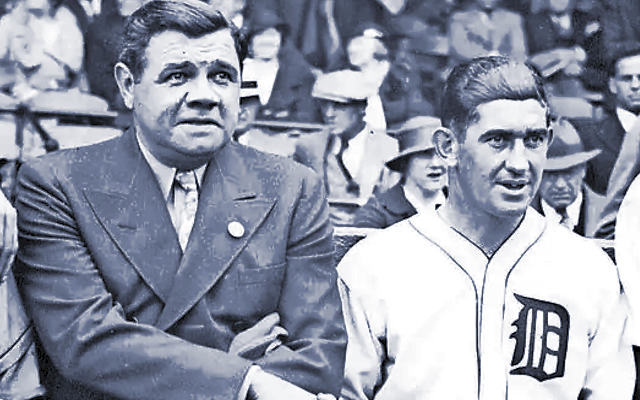 Babe Ruth with Mickey Cochrane at the 1934 World Series. Ruth nearly managed the Tigers that season.

The following is an excerpt from Scott Ferkovich’s upcoming new book, Motor City Champs: Mickey Cochrane and the 1934-1935 Detroit Tigers.

With manager Bucky Harris having handed in his resignation following another poor showing in 1933, Tigers’ owner Frank Navin begins his search for a replacement.

Navin needed a new manager, but he had an additional problem on his hands: The sparse crowds at Navin Field. The Depression had hit Detroit hard. People simply did not have the disposable income for a trip to the ballpark anymore. All throughout the major leagues, teams were playing in front of legions of empty seats, as attendance plummeted 40 percent from 1930 to 1933 (The numbers would not reach pre-Depression levels until after World War II, when soldiers numbering in the millions returned from overseas.). Not helping matters was the ten percent Federal Amusement Tax added to the price of a ticket beginning in 1932. That year, only the Chicago Cubs and New York Yankees, pennant winners both, turned a profit. In 1933, only the New York Giants and Philadelphia Phillies were in the black. The Tigers averaged a scant 4,115 fans per game to Navin Field, a venue that seated 30,000. “Economically, it was a very tough decade for baseball,” notes Andrew Zimbalist, a sports economist at Smith College.

In short, Navin had to put more people in the seats if he wanted his baseball team to remain solvent. He required a manager, but also a gate attraction. He had a man in mind that he felt could fill both roles.

Frank Navin’s pursuit of the Sultan of Swat is a tale retold by nearly every Ruth biographer and countless Tigers historians. It remains a classic case of missed opportunity, of what might have been. While the details differ depending on the source, the gist is the same.

Ruth, 38 years old and nearing the end as a player, had long expressed a desire to manage a major league team, the Yankees especially. Team owner Jacob Ruppert, however, would have none of it. In his eyes, the Babe was still a carouser, a clown who could not be taken seriously as a leader of men. Ruppert once told him, “You can’t manage yourself, Ruth. How do you expect to manage others?” In truth, Ruppert would just as soon dump his aging star. The Sultan of Swat was coming off a season in which he had hit “only” .301 with 34 home runs and 104 RBIs. Solid numbers, by any measure, unless you were the Babe.

To Navin, however, Ruth was an enticing option, not merely as a player, but as a player-manager. Ruth could still hit the ball a mile, just not as often. Navin figured the Babe could bash a few homers and give fans a reason to come down to the corner of Michigan and Trumbull. Who knows, he just might prove to be a capable manager. It was a calculated risk. If Navin was harboring the idea, however, he kept it mum (he wasn’t known as Old Poker Face for nothing). As one writer put it, “Frank J. Navin, who accepted Harris’ resignation with regret, is saying nothing, except that Ruth and a lot of other good men have been suggested to him.”

During the 1933 World Series between the Washington Senators and the New York Yankees, Navin contacted Ruppert about the possibility of acquiring Ruth. The two men agreed to a deal in principle, and it looked for a while as if Navin had his man. All he had to do was get Ruth to come to Detroit to work out the financial arrangements.

That was easier said than done. Navin phoned Ruth, who seemed excited by the news. He maintained, however, that he had plans to travel to San Francisco to board a Hawaiian-bound ship. Once on the islands, he would play a few pre-arranged exhibition games (and a round or two of golf on the side). Could Navin wait until he got back? Navin suggested that Ruth take a later boat. Not possible, Ruth countered, ending the call.

That did not get the negotiations off on the right foot, since Navin was not a man who liked to wait for anybody. When Ed Barrow, the Yankees’ general manager, heard about the conversation, he phoned Ruth to tell him he was making a mistake, and that he should see Navin right away, or risk losing his big chance.

Ruth did not listen. Indeed, he only made things worse. While in California, he rang up Navin at his home, apparently forgetting the time difference, as it was two o’clock in the morning in Detroit. While Navin wiped the sleep out of his eyes, Ruth, in a crackly long-distance voice, demanded a percentage of the gate receipts, on top of his high salary. Navin, who had a reputation as a skinflint, immediately saw visions of money flying out the window. He hung up the phone, ending his flirtation with the Sultan of Swat.

The idea of Babe Ruth playing (and managing) for the Detroit Tigers seems the stuff of fantasy, and yet it is not entirely implausible. Navin did need a new manager, he did need a drawing card, and Ruth was available. At the time, however, Ruth never made any mention of an offer from Navin. Upon his arrival in Honolulu, a brief paragraph appeared in the New York Times stating flatly, “Ruth was unwilling to discuss the game in which he is the home run ‘king,’ except to say he had not as yet received an offer of a managership from any major league club.”

To his dying day in 1948, Ruth insisted that nobody in Major League Baseball ever gave him the opportunity to manage a team. While Ruth admitted that Navin had indeed approached him, he could be vague as to what exactly they had discussed. Years later, Harry Grayson, the longtime sportswriter and editor, wrote, “Despite reports to the contrary, Ruth says he was never made any kind of an offer to manage a major league club. The late Frank J. Navin telephoned him in San Francisco as he was about to sail for Honolulu in the fall of 1933, said something about wanting to see the old home run king.” What exactly was that “something?” Surely, Navin did not want to get together with Ruth simply to have tea and crumpets. Big plans must have been in the works.

As for Barrow, he always believed Ruth blew it. According to one writer, “Barrow says that the Babe was offered the management of the Detroit Tigers and only his slowness in visiting the Motor City to sign his contract” caused the deal to fall through.

So, if not Babe Ruth, who was going to be the new manager of the Detroit Tigers?