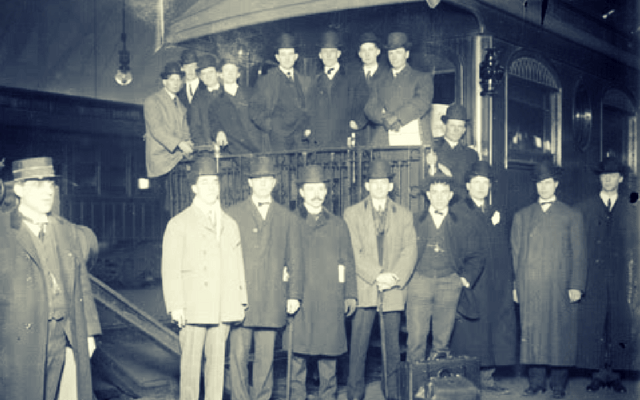 Members of the 1904 Chicago Cubs prepare to embark on a trip by train.

Ty Cobb had been a member of the Tigers for only about two weeks when he packed his bag for his first long road trip in the big leagues. He didn’t even have his own place in Detroit yet — he was staying in a boarding room on Charlotte Street only a few blocks from Bennett Park — and frequently, the 18-year old rookie would walk to the ballpark. But Ty’s initial road trip as a big leaguer was a real doozy.

On September 16, a Saturday evening, only a few hours after the team defeated Cleveland in a game at their wooden ballpark on Michigan and Trumbull, Cobb climbed aboard a Michigan Central Railroad car at the train station near the Detroit River east of downtown. The city was crisscrossed with so many miles of train tracks that a few years later when the automobile industry began to mature, there weren’t enough roads to accommodate the new mode of transportation. But for now, if you wanted to get somewhere, the train was your best option. The train that carried Cobb and his teammates moved south toward St. Louis, a city still so far out of the way for most Americans that it was known as “The Gateway to the West.”

When the Tigers arrived in St. Louis late on September 16 they quickly checked into their hotel and got a few hours sleep. The next morning, Cobb and the rest of the club went to Sportsman’s Park to face the Browns. That game started a grueling 22-game road trip over 21 days in six cities that ended the regular season. The team wouldn’t sleep in their own beds back in Detroit until October 7.

Baseball teams were some of the best customers for train companies in the early 1900s. The major league schedule called for 154 games for 16 teams, meaning that almost every day from mid-April to late September or early October, eight teams were on the road. Every few days for six months several baseball teams were moving a few dozen people from one city to another. And that was just at the big league level. In 1905 there were more than 40 professional baseball leagues and all of them had young men to move across the country.

But train travel wasn’t cheap, and team owners in those days were far from being billionaires. Most of the baseball owners in the early 20th century ran their clubs as family operations with a close eye on their budget. As a result, the schedule makers tried to consolidate the road trips to keep costs down. That meant long trips.

In 1905 the Tigers had a 20-game road trip that started on May 29 and didn’t conclude until June 23. That trip took the team to Chicago, St. Louis, Washington D.C., Philadelphia, Boston, and finally New York before turning back for Detroit. In late July they commenced on a 17-game road trip to the east coast. That trip included three doubleheaders, all of which were played during the day, since night games wouldn’t become popular until after World War II. Sometimes the teams changed into their uniforms on the train and went directly to the ballpark when they arrived in a new city.

Travel by train was as luxurious as it could be. Each first-class passenger had a sleeping berth and there were cars for dining, drinking, and entertainment. Ballplayers had their routines: on the long trips they set up tables in their shared sleeping cars for playing cards. The veteran players got the bottom berths and young, fresh rookies, like Cobb in 1905, would have been required to climb to the upper berth. Whether you slept up or down though, both spots were uncomfortably warm: there was no air conditioning in those days. Train travel in the summer was dreadfully hot and also very dusty: windows were almost always open on the rail cars to provide some relief. Most travelers arrived at their destination with a thick layer of dirt on everything they brought with them.

For several weeks on these road trips, ballplayers were living out of their suitcase (or trunk if they were able to afford one). As a result, entire industries sprung up to serve the weary traveler. These were usually young boys or minorities serving as shoe shines and cobblers, launderers, salesmen, bookies, tailors, haberdashers, sommeliers, errand boys, and the like. A ballplayer could get almost anything if he shoved money in the right hand. Before every road trip a team official would distribute the meal money in plain envelopes. Some players splurged away from home, while others saved their money as much as possible.

In 1905 it took four hours to travel from Detroit to Chicago by passenger train (or a little less than it takes to drive that distance today). Detroit to St. Louis was nearly nine hours, while Detroit to Cleveland was a relatively easy two and a half hours non-stop. Most road trips were scheduled in stages: the Tigers would leave Detroit (usually only an hour or two after playing a home game) and go to a “western” destination like Chicago or St. Louis. From there they would hit the closest cities in a train-hopping route so as to limit the time spent on the tracks as much as possible.

From 1901 until 1958 when MLB finally expanded to California, no team was located farther west than St. Louis. This meant that the Cardinals and Browns had to travel for more than 24 hours on trains to get to their east coast rivals. Once there, they typically spent at least three weeks playing their way up and down the Atlantic coast. They usually did this trip twice.

A few players thrived on the road despite the conditions, but most disliked the demands of travel in the early 20th century. Still, the games went on, and a few teams found great success away from home. In 1916, the New York Giants left for a 21-game, 24-day road trip that sent them west to Pittsburgh and on to Chicago and St. Louis before looping back to visit Cincinnati, Boston, and Philadelphia. There must have been some magic in their suitcases: the Giants won the first 17 games on that trip and went 19-2 overall. But to illustrate how tough it could be: later in the season the Giants went 8-14 on a 22-game trip and finished in fourth place.

Travel for long stretches also added off-the-field challenges. Many players drank and partied more on the road, and more than a few kept a mistress or two tucked away in far-away cities. Drinking was a serious problem in professional baseball in the early 20th century, perhaps more than it ever has been. Most players were not highly educated, they were simple men filled with the desire to let loose. Liquor was more potent and less regulated. Several high-profile players ran into trouble because of “devil water.” In 1903, Ed Delahanty, the greatest hitter in baseball but a terrible drinker, fell off a bridge after being ordered off a train due to drunkenness. His body was found the next day at the bottom of Niagara Falls.

Gamblers lurked on trains and in hotel lobbies, scheming to secure a crooked agreement with ballplayers to fix games. According to research, prior to 1920, 45 different professional leagues were stained by game-fixing scandals and more than 200 players, managers, and umpires were implicated in wrongdoing. It’s likely that as many as four World Series played before 1920 featured games that were played dishonestly.

As more Americans traveled by train, including the ballplayers, magnificent hotels sprung up in cities to serve as their “home away from home.” In Detroit it was the Pontchartrain Hotel, a regal facility located on the corner of Cadillac Square and Woodward Avenue. In Chicago, Cobb and his teammates slept at the Knickerbocker, and in D.C. it was the famed Willard.

The extended road trips of the early 1900s were part of the game, and something that continued in some form into the 1940s. Today, if a team has to go on the road for as many as three straight series it’s considered a long trip. Plane travel has made it easy for teams to jet across the country for a series here and a series there and back home again. That makes it easier, but also a little less interesting.