Lu Blue went from fan to teammate of Ty Cobb 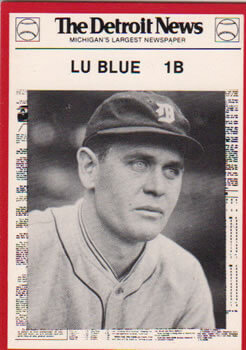 When he was growing up as one of ten children in Washington D.C. in the first decade of the twentieth century, Luzerne Blue was a huge baseball nut. At that time, the name for fans was actually “cranks”, and Lu was a first-class crank.

His favorite player was Ty Cobb, the fleet outfield star of the exciting Detroit Tigers. At least twice a season when he was between ten and fourteen, Lu found a way to get to National Stadium to see Cobb’s running and batting exploits as Detroit faced Washington. The young boy had no idea that someday he’d be playing for Ty Cobb.

But that’s what happened: Blue played his first six seasons in the majors for Cobb, who was by that time the player/manager of the Tigers. From 1921 to 1926, Blue was Ty’s starting first baseman. Cobb liked Blue’s “deadball era” approach: he was a line-drive hitter who shunned the trend for home run swinging that was sweeping through the big leagues at that time. Blue never hit more than six homers in a season for Detroit, and his career total was only 44 round trippers in 13 seasons.

Blue had three valuable skills as a hitter. First, he made contact: he rarely struck out, once striking out just 18 times over a full season. Second, Blue was a switch-hitter who could hit the ball to all fields from either side of the plate. And lastly, Blue had an excellent eye: he walked 103 times as a rookie and his career on-base percentage was .402. As a result, Blue was a perfect leadoff hitter, which is where his manager wrote his name onto his lineup card most of the time. With Cobb, Harry Heilmann, Heinie Manush, and other great hitters batting behind him, Blue came around to touch home plate a lot. He scored 103 times as a rookie in ’21, then followed with 131 more in his sophomore season. Six times in his twelve full seasons, Blue topped the century mark in the all-important run category.

When Cobb left the Tigers after the ’26 season it was good timing for Blue. The relationship between the two men had begun to sour after six seasons together. But things got worse under George Moriarty, the man who replaced Cobb as skipper of the team. Blue batted only .260 in what he called “a hellish season” and his final year in Detroit. He went on to play for the Browns, White Sox, and Dodgers, ending his career in 1933 at the age of 36.

One of the few men who flourished and survived during the years that Ty Cobb managed the team, Lu Blue hit .295 in seven seasons and nearly 1,000 games for the Tigers. Three times he finished in the top twenty in MVP voting while he wore the wool uniform of Detroit.

During World War I, Blue interrupted his playing career and served in the U.S. Army. When he passed away in Virginia in 1958 he was buried in Arlington National Cemetary.