Matthew Stafford is the most important player in the NFL 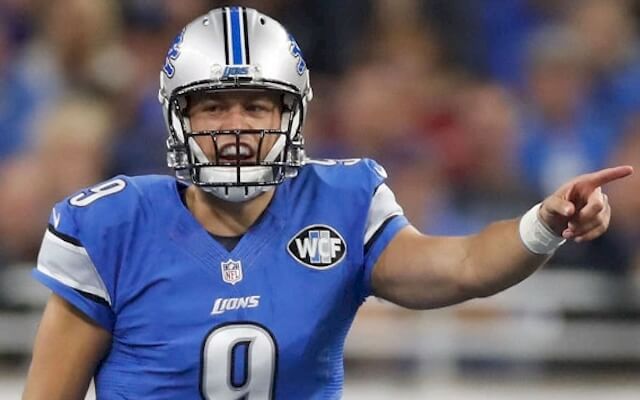 I have a question for you:

How many games would the Detroit Lions have won in 2017 without Matthew Stafford?

Think about it carefully and put that number in your head. Got it?

If you said anything over four, get up from where you are right now, find a friend or a stranger (anyone) and have them call you a fool. I’ll wait.

The Lions were a mediocre team in 2017 with a mediocre coaching staff. Yet they managed to win nine games and challenge for a playoff spot. They were one terrible referee call away from being 4-0 and earning a wild card spot. But anyway, the point I’m making is that Stafford led the Lions to nine hard-fought wins. Without him, the Lions are a 3-4 win team, if that.

That’s the same situation they find themselves in this season. In what will be Stafford’s tenth NFL season (already?) the Lions’ success is tied directly to the man with the big arm.

The Detroit Lions will go as far as Matthew Stafford takes them. God forbid if he gets hurt, it won’t be pretty. You think the Packers fell off a cliff last season when Aaron Rodgers was lost for the season? The Lions would plummet. Stafford is the most important man on this or (probably) any other team in the league. Even if many Detroit fans can’t get that through their heads.

Because of his huge impact on the bottom line in Detroit, Matthew Stafford is the most important player in the National Football League.

In his seven full seasons as QB (not counting his rookie campaign when he was still very wet behind the ears), Stafford has led the Lions to 9-11 wins four times. Over the last five years the team has been 43-37. Think about that. With no running game, a chaotic defensive unit, undermanned O and D-lines, and a dearth of receivers (outside of Megatron), the Lions somehow have managed to be a winning team the last five years, making the playoffs twice. How? The answer is Matthew Stafford, people.

Stafford turned 30 this past February. He has nearly 35,000 yards passing and his interceptions have steadily been going down. He has a 53-to-20 TD to interception rate the last two years, when he’s also completed 65 percent of his passes. He’s matured into a vocal and spirited play caller and leader. He’s accepted the role as savior and goat. He’s won games nearly single-handedly with fourth quarter comebacks. Yet he still has more detractors in Detroit than he has fans.

If you’re planning to watch the Lions this year, do yourself a favor and watch #9 closely. He’s the best quarterback the Lions have had in the last six decades. If you’re going to tune in for Monday Night Football next week, you may as well admire Stafford’s play. He’s not going to be here forever. We won’t have this type of talent at the most important position in sports forever. Look around the NFL. How many really good quarterbacks are there? Five? How many teams are running out never-wases and wannabes at the QB position? Most of them.

The Stafford Era in Detroit may never produce a Super Bowl. Hell, it may never feature a trip to the Conference Championship. But neither did the Megatron Era, or the Barry Sanders Era. Those guys toiled on mediocre or just-plain-terrible teams for much of their careers. It’s not Stafford’s fault that his supporting cast has been sad-and-sorry. It’s not his fault he rubs shoulders with mediocrity.

Enjoy this guy. Even root for him. The season will be much more fun that way.