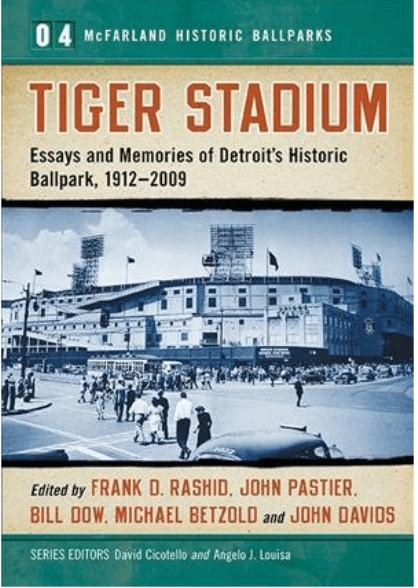 Detroit baseball fans old enough to remember Tiger Stadium have memories that they continue to cherish. Maybe it was Denny McLain’s 30th victory in 1968, or Reggie Jackson’s moonshot in the 1971 All-Star Game. Maybe you were one of the lucky ones in attendance when Mark “The Bird” Fidrych mowed down the New York Yankees on Monday Night Baseball in 1976. Whether it was Kirk Gibson homering twice in the deciding Game Five of the 1984 World Series, or Frank Tanana shutting out the Toronto Blue Jays on the final day of the 1987 season to clinch the American League East, the corner of Michigan and Trumbull was never starved for drama or history.

After much anticipation, McFarland and Company has just released a new book that is sure to be a winner for those of us who still miss the Tigers’ former home. It is the latest volume in the “McFarland Historic Ballpark” series, titled Tiger Stadium: Essays and Memories of Detroit’s Historic Ballpark, 1912-2009 (the first three volumes were on Forbes Field, Ebbets Field, and old Comiskey Park). The title speaks for itself.

It is a collaborative work, edited by five renowned baseball historians: Michael Betzold (a former Free Press reporter), John Davids (an architect who produced the well-regarded Cochrane Plan for renovating Tiger Stadium in the 1970s), Bill Dow (who has written for the Free Press and Baseball Digest as well as this blog), John Pastier (an architect specializing in ballparks), and Frank Rashid (a writer of all things Detroit). They, along with other top-notch writers and researchers, have put together a book that will prove a feast for the soul for Tigers fans, full of memories, anecdotes, perspectives, photos, architectural diagrams, and forgotten history. This is Detroit’s must-have baseball book this season.

The opening two-part article, “A Century on Common Ground,” starts the reader off with a fascinating look at the history of baseball at the Corner, from its Bennett Park beginnings to the demolition of Tiger Stadium. And let us never forget that Michigan and Trumbull was also home to the National Football League, and Dow’s wonderful piece “Detroit Lions Roar at Briggs Stadium,” gives us all the great, mud-covered moments. Dow also has another essay that recalls some of Tiger Stadiums quirky souvenirs. “One of the all-time great souvenirs from the 1960’s was the cardboard megaphone popcorn holder with a handle on it.” Maybe you still have one?

In his essay, “Longevity and Adaptability: Tiger Stadium’s Evolution, Architecture, Functionality, Structure, and Urban Context,” Pastier delves into the “perhaps a dozen configurations” that the park underwent in its nearly 90-year history.

In “Losing Tiger Stadium, 1987-1997,” Frank Rashid chronicles the political backroom drama surrounding the efforts to either renovate or replace Tiger Stadium. Rebecca Long, in “The Battle for Sacred Ground,” looks back at some of the well-intentioned, but ultimately futile, preservation efforts.

Michael P. Gruber has one of my favorite pieces, “Tiger Stadium in Literature.” As Gruber shows, Fenway Park and Wrigley Field are not the only classic ballparks about which poets and writers have sung its praises.

The article entitled “From the Stands” is filled with splendid reminiscences by passionate fans. One of the more evocative examples comes from Max Lapides (the co-founder of the Eddie Lake Society, “an organization of Tigers enthusiasts), whose father, at age 16, saw Ty Cobb’s very first game in 1905. Dale Petroskey, the former president of the National Baseball Hall of Fame, remembers “that wonderful moment that you can only experience once: when you first walked into Tiger Stadium, and you see that green grass, and you smell the popcorn, hot dogs, and the cigar smoke. The great pageantry of it all was so appealing.” Donald Hall, the Poet Laureate of the United States, when comparing the atmosphere at Tigers and Lions games, points out that “crowds in baseball were…better behaved,” whereas “the football crowd was…full of drunks, and with a lot of nasties showing off.” Hmmm, sounds a lot like today.

There are also oral histories from former players such as Rocky Colavito (“Believe it or not, Tiger Stadium was not one of my favorite ballparks.”), Dave Rozema (“All of a sudden I’m pitching to Carl Yaztrzemski, and you’re thinking, “Oh, shit.”), Ron LeFlore (whose father began taking him to Lions games when he was nine years old), and John Wockenfuss (“It was like a cathedral.”). We also hear from the folks who worked at Tiger Stadium, as well as those who lived in the Corktown neighborhood, where it was a daily presence in their lives.

Tiger Stadium: Essays and Memories of Detroit’s Historic Ballpark, 1912-2009 is a book to savor, sip by delicious sip, like an ice-cold beer, with enough stories and essays to last you through the long, hot summer. All the editors and writers did a wonderful job, adding another volume to what has been a great series by McFarland.