Old English or Old German: Which D Is It?

The Detroit Tigers may not win a lot of baseball games any more, but at least they look good on the field. The Tigers are lucky to be able to wear one of the most iconic uniforms in American sports. The Old English D, which has pretty much been on the Detroit uniforms for more than 125 years, is only surpassed by the “A” used by the Athletics for longevity.

You may not know it, but the Tigers Old English D is definitely old, but it may not be English at all.

If you’re like me, you love nothing more than to curl up on a hammock with a copy of a thick book like “The History of Fonts in Europe” or “The 16th Century Guide To Typesetting.” Am I right, or am I right?

Ok, so maybe it’s only me that finds print and typesetting history interesting. Maybe that’s why my children roll their eyes at me and call me a “dork” in front of my back. Maybe that’s why I usually have no plans on Saturday night. Maybe.

I first started becoming interested in font history and typesetting a few years ago when I was researching an article about the history of the Detroit Tigers uniform. It may feel like a given that the Detroit Baseball Club has always worn an Old English D cap and always had a ferocious Tiger as their mascot, but it’s not quite that simple.

What’s the difference between Old English and Old German?

An old Englishman and an old German walk into a pub… 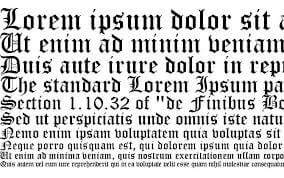 Looks fancy, doesn’t it? Old and fancy. Like something you’d see on a diploma from a wizard’s school.

But what is it and why is it so popular? How the heck did it even get to America? And how did the Tigers end up using it on their baseball caps?

Well, there really isn’t much difference between Old English and Old German. It simply depends on where you are. If you’re in Frankfurt, you probably call the font Old German, and if you’re hanging your knickers in Manchester or York or any “Shire,” then you’ll call it Old English.

The Origins of Blackletter Typeface

Where did this font come from?

The font you know as Old English is actually technically called Blackletter typeface (also sometimes referred to as Gothic or Fraktur, which is Latin for “broken”).

Blackletter typeface was first used in the Guthenburg Bible in the 12th century, which, in case you have forgotten, was one of the first books printed in Europe, because folks were just crazy about God.

The Blackletter typeface was chosen for the Guthenburg Bible because it was so bold and easily distinguishable. Why was that important? Well, because not everyone had access to candle light in the 1100s. It was a cold, dimly lit time.

In those days priests were the primary publishers of books, and they chose Blackletter because it was easily recognizable by its dramatic thin and thick strokes. Some Blackletter font styles also featured elaborate swirls on the serifs, and dramatic swoops. It may be hard to understand now, because no one writes anything any more, but in the 12th century, typefaces were based on early manuscript lettering by the best printers, who were often bookkeepers or priests.

Books and Signs and Other Wordy Things

Typefaces aren’t important unless you have something to write. In the 12th century it wasn’t that crucial to choose a popular typeface, but as more people started to read and commerce began to grow rapidly, it was necessary for a new medium: advertising signage.

By the 15th century, many cities were welcoming travelers from far away places as it became easier to move around Europe. This is when shops and public houses (pubs) sprang up. If you had been there, you would have seen Blackletter typeface signs all over the place. The fanciness and appeal of the typeface made it perfect for use on signs, as well as for leaflets, which were used for many reasons back then, to convey information.

I don’t have to tell you that Britain and Germany have a tight, testy history with each other. On one hand they are intertwined, sharing a lineage and even sharing royalty for centuries. Then again, the two nations have taken arms up against each other a few times as well, with ghastly results.

Suffice to say though, that London and Berlin and the other industrial capitals of the two countries became hubs in Europe. Both remain influential today, but their influence on publishing was at its peak in the 17th and 18th centuries when the two nations were exporting their way of life to their colonies and elsewhere. When the Germans brought it with them it was Old German, when the Brits did, it was Old English.

The Blackletter typeface found its way to the Americas, and while the Declaration of Independence was not inscribed in Old English (a man named Timothy Matlack wrote it out in what was called “American Scribe”), the Old English and Old German typefaces were very popular. In Pennsylvania German country, Old German was printed on pamphlets and beer bottles. In New England, Old English was used on street signs and political statements that were handed out in the streets.

The Wolverines and Tigers: Making The D

It was only natural that when sporting teams started to form in the 19th century, they created uniforms. The Cincinnati Base Ball Club (known originally as the Red Stockings and later as the Reds) wore a “C” on the chest of their uniforms when they were dominating professional baseball in the 1860s, though they later abandoned the Blackletter “C.” The Athletic Base Ball Club of Philadelphia formed around the same time, and they used an Old German “A” on their uniforms. Later, when the team played in the American League, they placed the A on their caps, and a similar “A” remains even though the franchise has moved twice: to Kansas City, and then to Oakland. 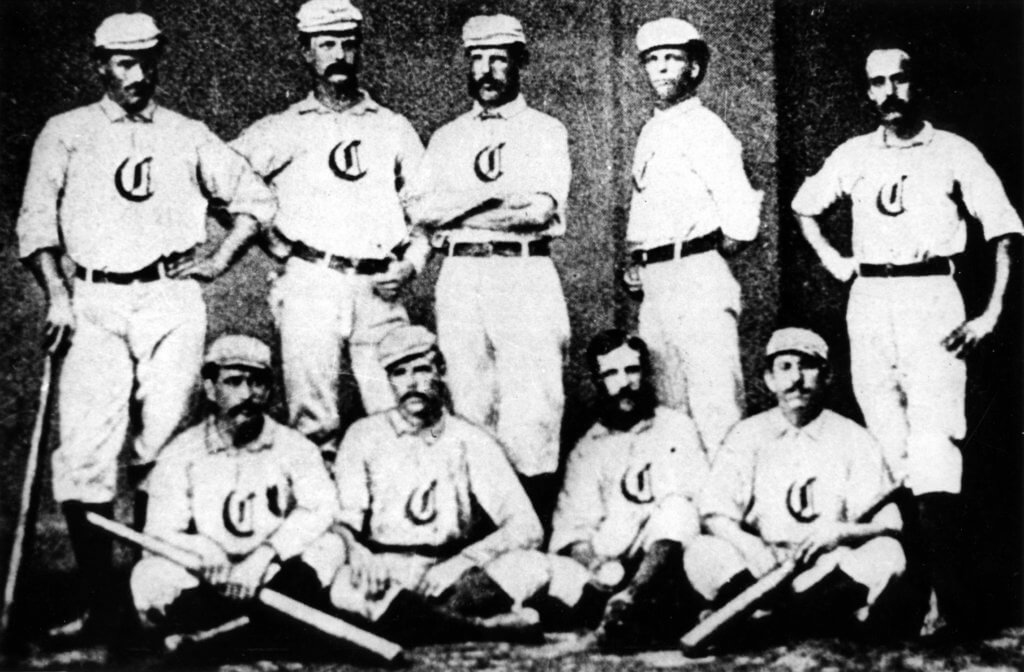 The 1869 Cincinnati Red Stockings went 57-0, 29-0 against other professional teams. Note the Old English (or German) C on their uniform tops.

The first professional baseball team to represent Detroit was the Wolverines, who were members of the National League from 1881 to 1888, and in 1887 they captured the pennant. The Wolverines hold the distinction of being the first baseball team to wear an Old English (German) D on their uniform. In 1881, the team looked like this: 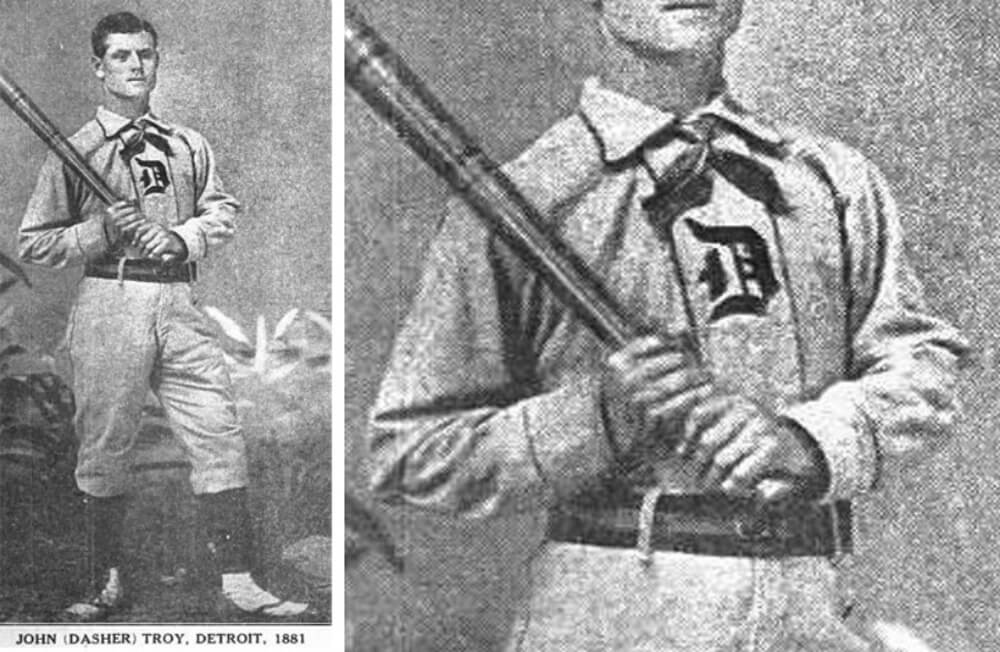 Dasher Troy is shown here wearing the uniform of the Detroit Wolverines in 1881. An Old English D can be seen on the center of the jersey. Troy was a popular player because he liked to drink beer and chase women. (photo via Nigel Ayres, Threads of Our Game)

Those look like fancy duds, so it’s strange that the Wolverines scrapped them after only one season. Later versions of their uniform had the word “DETROIT” across the chest or nothing at all. The Wolverines usually wore cream and maroon colors, sometimes black.

After the Wolverines folded, Detroit didn’t get another “major league” team for a few years, when the Tigers emerged in the new American League in 1901. The Tigers slowly earned their nickname “Tigers,” but they almost always had an Old English (or Old German) D on their uniform, usually the breast. 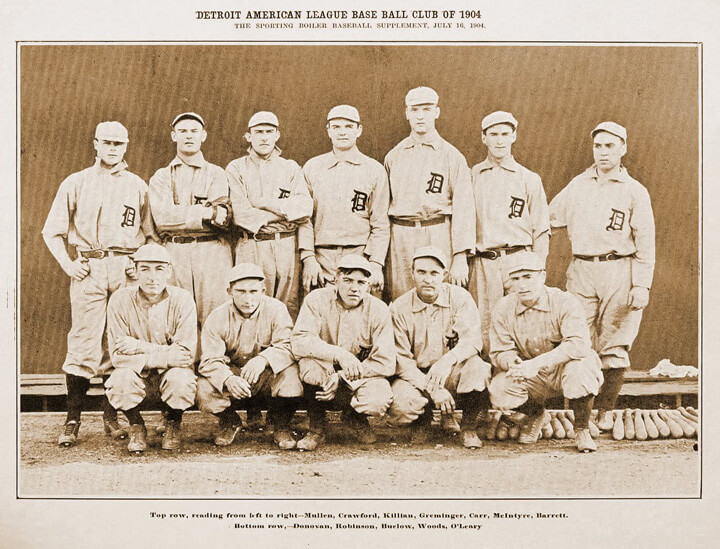 The Old English D appeared on the Detroit cap for the first time in 1905. Fittingly, that was the same year a teenage outfielder named Tyrus Raymond Cobb first played for the team. The Old English D (as fans call it) has been there pretty much ever since, though it’s changed over the years.

What Should We Call It: Old English or Old German?

By 1921, the year that Ty Cobb became manager of the Tigers, the D was solidly known as “Old English,” thank you very much. But why? It’s probably due to bad publicity.

The Germans fought (and lost) World War I. It just wasn’t cool to call things “German” or “Kraut” and so on. Even if typesetters (those crazy fools) still wanted to call it Old German or Blackletter Typeface, the name Old English had caught on.

Call it what you want: if you prefer to be that guy, and want to say Old German just to get a rise out of people, go for it.

Today, we see several iconic brands using the Old English, including Corona. You may not see it as much as a 16th century German would have in downtown Franfurt, but it’s still pretty special here in Michigan.