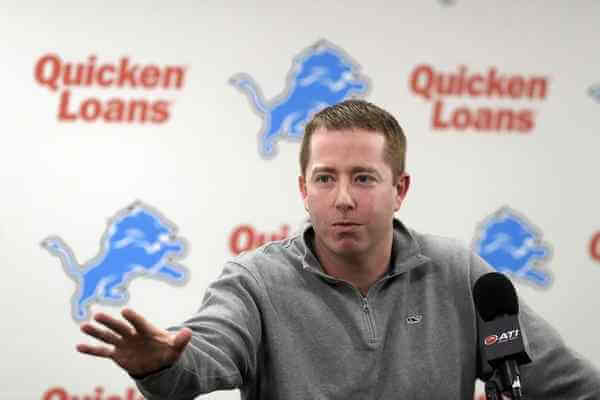 Bob Quinn’s first two years with the Detroit Lions deserve high marks, and yet those high marks have not led to success on the field. Now, as the team begins the 2018 offseason, Quinn faces his most important decision since being hired as general manager. If his track record so far in Detroit is any indication, the search for the next head coach of the Lions is in good hands.

After arriving in January of 2016, Quinn retained Jim Caldwell as head coach. That decision was met with a fair amount of criticism, and was viewed by some as a mandate from ownership that keeping Caldwell in the fold was a condition of accepting the GM position. It proved to be a moderate success as the Lions went 9-7 and qualified for the 2016 playoffs as the second wild card. However, they were soundly bounced from the postseason by the Seattle Seahawks. After another average season in 2017, which included multiple questionable coaching decisions and bad losses, the Lions’ 9-7 record was not enough to earn Jim Caldwell another season at the helm.

For better or worse, Caldwell’s tenure in Detroit was the most successful for a head coach since Wayne Fontes. It included three winning seasons and two playoff appearances, but no playoff victories. Despite only having mild success on the field, he was very successful off the field – establishing a more focused and disciplined attitude that will hopefully remain in his wake. Nevertheless, Quinn fired Jim Caldwell on New Year’s Day. Coming from the wildly successful New England Patriots dynasty, it was hard to envision Bob Quinn settling for mediocrity on the field.

For Bob Quinn’s last four years in New England, he was director of pro scouting. He immediately used that knowledge in his first year in Detroit by making an instant impact in free agency. He signed Marvin Jones, the best wide receiver on the market, to a five-year deal. Obviously no free agent was going to make up for the retirement of Calvin Johnson, but Jones has produced over 50 catches each year and over 2,000 total receiving yards. He’s finished 3rd and 1st, respectively, in average yards per catch among players with 50 or more catches during the 2016 and 2017 seasons. Pair that with the re-signings of Haloti Ngata and Tahir Whitehead, and it was a solid first free agency for Bob Quinn.

He went to work again in the spring of 2017. Quinn identified the offensive line as a weakness, and signed two of the best offensive lineman available in tackle Rick Wagner and guard T.J. Lang. While those signings didn’t contribute to better protection of Matthew Stafford or to an improved running game in 2017 (due in large part to injuries), a healthy line going into 2018 should be a strength of the team. Tight end Darren Fells and defensive tackle Akeem Spence were solid bang-for-the-buck signings and played well for the Lions in 2017.

Draft picks have stocked the Detroit defense with talent

The draft acumen that Quinn has displayed so far is even better than his ability to acquire free agents. The Lions roster is already packed with Quinn draft picks at almost every level, which is a crucial element in building and sustaining success in the NFL. His early round picks of offensive tackle Taylor Decker, defensive tackle A’Shawn Robinson, and linebacker Jarrad Davis, all have that Pro Bowl look. Quinn seems to be able to identify talent in the middle and late rounds as well. 2016 third round pick Graham Glasgow has started games at all three interior line positions during his career. Jamal Agnew, the team’s 2017 sixth round pick, led all full-time punt returners in average yards per punt return. Anthony Zettel recorded 6.5 sacks and played well overall after being forced into the starting lineup after Kerry Hyder was knocked out for the season during training camp. Miles Killebrew and Kenny Golladay have both been solid at times, and should push for more playing time in 2018.

Quinn has also been astute at recognizing when he has elite in-house talent, and signing those players to long-term contract extensions prior to them becoming free agents. Darius Slay, who is arguably Detroit’s best defensive player, was signed through the 2020 season the offseason before he was set to be a free agent. Just before the start of the 2017 season Quinn made his biggest move with the Lions to date, locking up quarterback Matthew Stafford through 2022. Franchise quarterbacks are not easy to come by, and Quinn made sure to not let the most important player on the team, and one of the best quarterbacks in the league, slip away.

Not everything Bob Quinn has touched as turned to gold, however: 2017 second round pick Teez Tabor played sparingly in his first year, even listed as a healthy scratch for a number of games. Quinn didn’t re-sign offensive tackle Riley Reiff following the 2016 season, and Reiff went on to have a good year with division rival Minnesota.

How Bob Quinn goes about roster development in the 2018 offseason remains to be seen, but the next step in shaping this franchise into a perennial Super Bowl contender is to finally hire “his guy” to coach the team that he continues to build.