An advertisement in the Detroit Free Press from December 3, 1946 promotes a game between the Detroit Gems and Youngstown Bears at Holy Redeemer High School Gym.

Basketball in the 1940s would be virtually unrecognizable today. With the shot clock still far in the future, the game could be a slow, low-scoring affair. In those days, it was viewed as a sport best suited for college players. The professional game was in its infancy, and struggled to find an audience.

To find the origins of pro basketball in Detroit, let us travel back in time to 1946, when it welcomed not one, but two teams.

A couple of Dearborn entrepreneurs named Maurice “Morris” Winston and C. King Boring decided to invest in a new team to play in the National Basketball League. It would be called the Detroit Gems, a name that made perfect sense, since Winston was a jeweler. The NBL had begun play back in 1937, but this would be the first entry from the Motor City.

The Gems had plans to play at a proposed venue, the Dearborn Forum, to be built near the intersection of Michigan and Wyoming. Construction never got off the ground, however, and the Gems began the season playing their home contests at the Ferndale High School gymnasium, which seated about 6,000. The Gems had trouble drawing fans, and eventually moved to the more intimate confines of Holy Redeemer High School near the Ambassador Bridge. On a good night, the Gems might play before 600 patrons.

Coach Joel Mason instilled a disciplined regimen for his hoop-playing troops. The Gems were to be on the court every day at precisely 8 o’clock in the morning for what Mason called a “before breakfast scrimmage.” Another session followed shortly after lunch. “We haven’t a so-called ‘name player’ on the squad,” he said. “But we have a dozen hard-working boys who are going to cause plenty of trouble in the league. We have been drilling hard and I think we’re ready to go.”

The Gems were anything but ready to go, and it proved to be a rough year in Motown. Barely a month into the season, there were rumblings that the team was running short of cash and would have to fold. Winston denied the rumors. “I went into this on a long-term basis. Next year we’ll be at the Forum in Dearborn, and we’ll have a winning team.” Near the end of the campaign, the Gems worked out an arrangement to play some games at Olympia Stadium, but attendance remained woeful.

The Gems were not the only new professional hoops team in the Motor City that year. The Detroit Falcons were one of 11 teams in the newly formed Professional Basketball Association of America (or just the Basketball Association of America for short). Fans of today will recognize the names of some of the other teams in the league, such as the New York Knicks and Boston Celtics. The PBAA also included the St. Louis Bombers, the Toronto Huskies, the Pittsburgh Ironmen, and the Providence Steam Rollers. 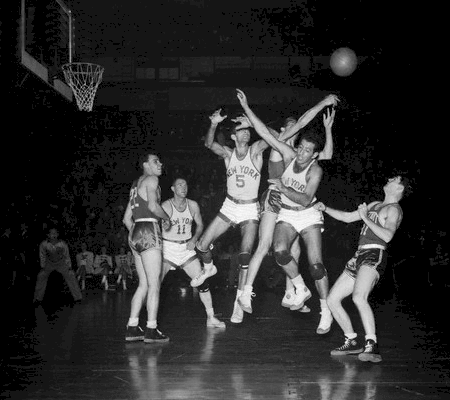 The Detroit Falcons and New York Knickerbockers play a game during the 1946-47 season.

The main front-office man behind the Falcons was James D. Norris, the son of Red Wings’ founder James Norris, Senior. (In time, James Junior became a prominent jack-of-all-trades with the Wings, signing many of their star players, including Gordie Howe. He later gained even greater fame as an exec with the Chicago Blackhawks, and eventually made it into the Hockey Hall of Fame). As vice-president of Olympia Stadium in 1946, the young Norris decided to lure pro basketball to the arena in order to generate more revenue.

The Falcons played their first game on November 2, 1946, a Saturday night at old Olympia. Tickets ranged from $1.00 to $2.50. It was an inauspicious start, with the Falcons losing to the Washington Capitols by a score of 50-33. Only about 6,000 curious onlookers showed up.

The most familiar player on the team was Tommy King, a recent hoops star at the University of Michigan (after having transferred from Michigan State). Another known name was Chet Aubuchon, who starred for the Spartans. Ariel Maughan had once made 75 straight free throws at Utah State College, earning him the nickname, “The Foul-Shooting Demon.” As with the Gems, stories made the rounds that the Falcons were ready to declare bankruptcy at any moment, an assertion that Norris vehemently denied.

The ugly truth was that both the Falcons and the Gems suffered huge financial losses. Some reports had Maurice Winston winding up $50,000 in arrears by the end of the season. Olympia meanwhile finished $30,000 in the red. The Falcons drew so poorly at the old barn on Grand River that they even had to transfer a few home games to Flint in hopes of a larger gate. The Gems played more like glass imitations, winning only four games while losing 40.

On June 4, 1947, Morris Winston announced that he was selling the Gems to Benny Berger, a Minneapolis-based businessman. Berger promptly moved the team to the land of 10,000 lakes, and changed its name to the Lakers. They remained in Minnesota until heading west to sunny Los Angeles in 1960. Incredibly, five years later, the franchise that Winston sold at a loss was purchased by Jack Kent Cooke for over $5 million, and is today valued at nearly $3 billion.

Just over a month after Winston sold the Gems, the Falcons, who had finished with a record of 20-40, formally announced their withdrawal from the Basketball Association of America. Players from the roster were awarded to other teams in the league. In a parting shot, the BAA president said that Olympia officials were convinced Detroit was not a good basketball city.

By August 1949, the BAA and the NBL merged to form what we now know today as the National Basketball Association.

The Motor City’s experiment with the Falcons and Gems had flamed out after only one year. The city would be without professional basketball until 1957, when the Fort Wayne Pistons relocated to Detroit.

The Detroit Gems may be a long lost memory, but the name of the team’s co-owner lives on in Dearborn. King Boring was a man of many hats. He became a baseball scout for the old St. Louis Browns and the Detroit Tigers. He was a coach for a Dearborn-based baseball team that won several championships. In addition, he gave thousands of dollars to support youth athletics in Dearborn. It should be no surprise, then, that the city named a baseball diamond in his honor: King Boring Field, located in the Ford Woods Park complex at Ford Road and Greenfield.