These top scorers played for the Red Wings 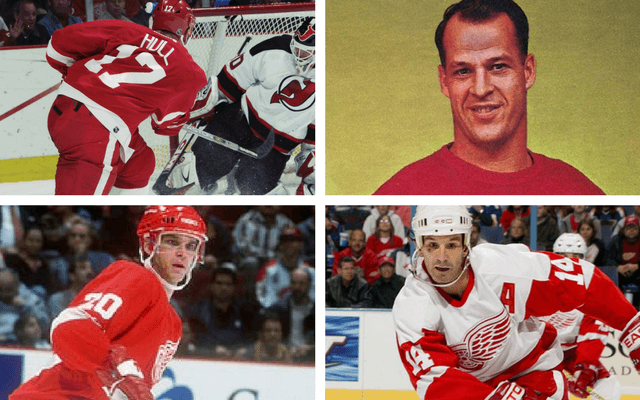 The Detroit Red Wings are one of the few franchises in professional sports to have multiple dynasties. It only makes sense that they have had some of the top scoring players in the history of the NHL.

In fact, 10 of the top 26 point scorers in NHL history reached that elite group playing with the Red Wings logo on their sweaters, at least for a time.

Of course, Mr. Hockey, Gordie Howe, played most of his career in Detroit, racking up 1,850 points for fourth all time.

Then there is Steve Yzerman, who played his entire career in Detroit, tallying 1,755 points in his career with the Red Wings. That total is seventh all time, but No. 1 for players playing their entire career with one team.

But there are plenty of other players among the game’s elite, who spent time with the Red Wings. Most of them started or finished their careers in the Motor City.

Legend Marcel Dionne actually started his career with four years in Detroit. He went on to tally 1,771 career points, which ranks No. 6 all time.

The No. 2 scoring defenseman of all-time was Paul Coffey, who played 3 ½ seasons with the Red Wings in the mid 1990s before being traded for Brendan Shanahan — a trade that ultimately won the Red Wings a couple of Stanley Cups. Coffey finished his career with 1,531 points, good for 13th all time and a total that trails just Ray Bourque (1,579) among defensemen.

Like Dionne, Adam Oates began his career with the Detroit Red Wings. It was easy to forget since he played in the mid-to-late 1980s, when the Red Wings were having one of their worst decades. But Oates went on to star with Boston and Washington and finished with 1,420 career points, which ranks No. 17.

In the late 1990s and early 2000s, the Red Wings began signing a lot of big-name players toward the end of their careers. Several were among the top scorers in the history of the game.

In 2001, the Red Wings landed Luc Robitaille, who played two seasons with Detroit. He is known for his long tenure with the Kings and totaled 1,394 points, which ranks No. 21 on the all-time list.

The next two spots on the all-time last behind Robitaille are also players who were twilight pickups by Detroit.

Brett Hull scored 1,391 points, No. 22 on the all-time list. He, like Robitaille, joined the Red Wings in 2001 and played three seasons in Detroit and scored his 700th career goal as a member of the Red Wings.

At No. 23, Mike Modano checks in with 1,374 points. He joined the Red Wings in 2010, playing his final season with his hometown team. Born in Livonia, Modano played the other 19 years of his career with the Stars.

John Bucyk is another Hall of Famer who began his career with Detroit, though he scored just 11 goals with the Red Wings in his two seasons from 1955-57. He went on to tally 1,369 career points, most of them coming in his 19 seasons with Boston. He ranks No. 25 of the all-time list.

No. 26 is Brendan Shanahan, who was traded to Detroit for Coffey and ended up with 1,354 career points.

Whether they tallied the majority of their points in Detroit or with other teams, Detroit has been a stop for 10 of the top 26 point-scorers in NHL history Just one of the reasons they call Detroit: Hockeytown.