Tigers’ reliever Dave Tobik was an ace in the community 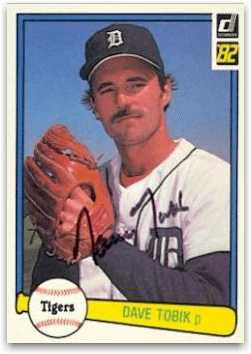 Dave Tobik was a down-to-earth kind of guy when he broke in with the Detroit Tigers in August 1978. He hadn’t changed when he landed his first post-baseball job a few years later, where his duties at Focus:HOPE included handing out five-pound blocks of cheese to needy Detroiters.

“When he came here, he wanted a job where he could contribute,” program founder Eleanor Josaitis said when the former $100,000-a-year pitcher accepted the $13,000 position. “He’d been in a field where he’d had a lot of success and attention. You picture an ego as big as all outdoors. But he’s a very beautiful, genuine human being. He was working with staff that had been around a long time and he was accepted right away.”

Tobik was raised in suburban Cleveland by parents who were active in their church and read the Bible together every night. Dave was one of six children, one of whom was adopted and another, Carl Davis, who was a foster child.

Carl had many difficulties, and ultimately the Tobiks—frustrated by the inefficiencies of social welfare system—had to return the boy to the state. Beset by major psychiatric issues, Carl committed suicide when he was 21. At the time, Dave was in his third year with the Tigers. “You think it could have been prevented if it had been handled better,” he told writer Tom Henderson in 1986, the year he joined Focus:HOPE. “That’s what got me working with kids.”

Tobik, a four-year star at Ohio University, was drafted by the Tigers in the 1975 supplemental draft. Throughout his 11 years in organized ball, which included stints with the Tigers (1978-82), Texas (1983-84), and Seattle (1985), Tobik typically spent his off-seasons working at such places as a boys home in Auburndale, Florida, and the St. Vincent and Sarah Fisher Center for Children in Farmington Hills.

As caring as he was off the field, on the mound Tobik strived to be stingy. All but two of his 196 appearances were in relief. His overall 14-23 record with 28 saves and a career 3.70 ERA was hardly exceptional, but he certainly had his moments. There was that game in May 1982, for example, when he and Jack Morris combined on a two-hit shutout of the California Angels. Sparky Anderson anointed him the team’s closer, saying, “That fork ball of his is unreal.”

Tobik led the team with nine saves that season, appearing in a career-high 51 games. He also had the distinction of giving up Wade Boggs’ first big-league home run—a walk-off homer in the 11th inning at Fenway Park. That resulted in one of Tobik’s nine relief losses that season, a mark of failure that the mercurial manager later held against him.

By the following season, Anderson had grown disenchanted with Tobik. During spring training he was sent to Texas for outfielder Johnny Grubb. For the Rangers, Tobik was a perfect 9-for-9 in save opportunities in 1983. But his speedball was never good enough to make him a top-tier reliever, and over the next three years he wound up bouncing between the majors and such places as Oklahoma City and Calgary.

By now married and anxious to raise a family, Dave quit the game in 1985 when he was 32. He missed the paychecks and the camaraderie, he said at the time, but it was the right decision. “You’ve got to decide whether you want to be with your family or chase the baseball dream.” Today he and his wife, Anne, a sportswriter he married while playing for the Tigers’ farm team in Evansville, Indiana, work and live in suburban St. Louis.

Tobik’s son, Dan, was a standout pitcher at the University of Tennessee and played several seasons in the low minors before ending his own big-league quest. While the majors eluded Dan Tobik, he evidently inherited his father’s humility and sense of priorities. Last year, he told a reporter that playing before family “adds more motivation, you want to make them proud. It really makes it special when you pitch well in front of the people you love most in life.”