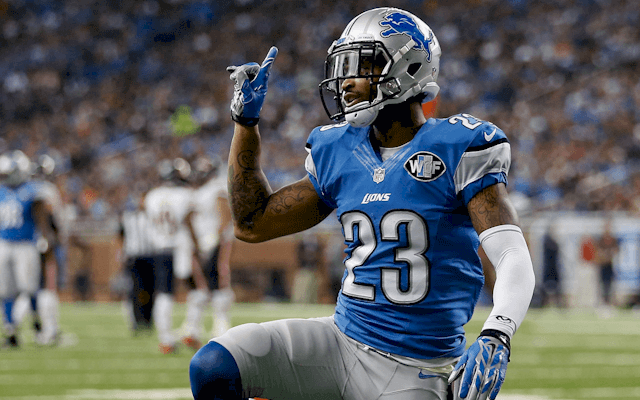 Cornerback Darius Slay has made big plays for the Detroit defense in 2016 but he’s also battled injuries.

The Detroit Lions and the Green Bay Packers are going head-to-head on Sunday Night Football in the final week of the season with the NFC North on the line. And the Lions have a chance to win.

It defies all logic based on Lions teams that have choked division leads away in the past, but it really, really, really is possible because of two roster components: Matthew Stafford and a healthy Darius Slay.

If Slay misses a second straight week with a right hamstring injury, though, you can throw everything I said about the Lions having a chance to beat the Pack out the window.

You only have to look at tape of Johnson Bademosi and Nevin Lawson constantly getting beaten by Dez Bryant in Detroit’s contest Monday night with the Dallas Cowboys to find out why.

Neither Bademosi or Lawson should be given the responsibility of marking Green Bay’s Jordy Nelson Sunday night.

If either has to man Nelson all game long, a strong game from Stafford won’t be enough to save the Lions from letting their fans down yet again.

The Packers are averaging 260 yards per game through the air — good for eighth best in the NFL. And Aaron Rodgers, the two-time NFL MVP and Week 16 NFC Offensive Player of the Week, hasn’t thrown an interception since Week 10 when he threw two against the Tennessee Titans.

Additionally, over the last six weeks, Rodgers has thrown for 14 touchdowns and 286 yards per game, good for a 118.8 QB rating.

He threw for four touchdowns and ran for another in Week 16 versus the hapless Minnesota Vikings.

If Slay is absent from the Detroit secondary, expect Rodgers to continue his no interception trend.

Rodgers is playing at such an MVP-caliber level that it may not even matter if Slay plays.

In contrast, with Slay in the lineup against the New Orleans Saints in Week 13, Detroit became the first team in 60 Saints home games to stop former Super Bowl MVP Drew Brees from completing a touchdown pass.

Brees was intercepted three times that afternoon, en route to Detroit’s first and still only non-fourth-quarter comeback victory of the season.

Detroit’s leading franchise passer has thrown for no more than one touchdown in a game over the last three weeks, and he’s started to throw the ball to the wrong team too.

In fact, the last time #9 had a passer rating which exceeded 80 came against the Saints when he amassed a 111.3 passer rating after throwing for two TDs, no INTs and 341 yards.

Since his monster game versus the Saints, there’s been no easier matchup for the former No. 1 overall pick than Sunday’s clash with the Pack. Like the Saints, the Packers rank 20th or worse in both points and yards allowed per game.

That can’t be said about the Cowboys, N.Y. Giants or even the lowly Chicago Bears — the Lions’ last three opponents.

And on top of all that, Staff has already torched Green Bay’s secondary once this season.

He hurled three TDs to go along with a season-high 385 yards in Detroit’s 34-27 Week 3 loss at Lambeau Field, a place where the Lions have only won three times in the last quarter century.

Luckily, the Lions will be at home for this end-of-the-season, winner-take-all matchup with their division rivals. They’ve only dropped one contest at Ford Field this season, with that loss occurring all the way back in Week 2 versus the Titans.

You can make the argument that Stafford’s highly impressive performance against Mike McCarthy and the Pack in the beginning of the season means nothing because he’s currently playing with an injured middle finger on his right hand.

However, remember this nugget: the Packers’ defense allowed career benchwarmer Matt Barkley to complete nearly 70 percent of his passes (69.8 percent) in Green Bay’s 30-27 squeaker over the Bears in Week 15.

So, why can’t the Pro Bowl snubbed Stafford be as efficient as the average-at-best Barkley?

Throwing the football at Ford Field instead of at the “Frozen Tundra” in wintry conditions should allow the Georgia product to throw the pigskin with a little more zing Sunday night. It’s not far-fetched to believe that he can eclipse a completion percentage of 70 percent against the Packers. When he has versus other foes so far this season, the Lions have been unbeatable, winning all five games.

Admittedly, Stafford completing above 70 percent of his passes doesn’t guarantee success for Detroit against Rodgers & Co.

I’d be a fool for telling you that it does, as Rodgers has led Green Bay on a five-game winning streak which has propelled the Pack back in the hunt for the NFC North crown.

This fact remains: the Lions, despite their recent poor play and all the letdowns over their franchise’s 87 years of existence, have a legitimate shot at pulling off the perceived impossible – winning a must-win game against the Packers.

Whether or not it comes to fruition hinges on two things: getting an efficient game from Stafford, and Slay being able to play as many snaps as needed.