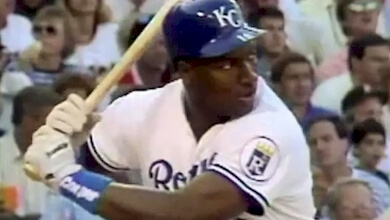 Bo Jackson started the 1987 season red-hit, punctuated by a two-homer game against the Tigers.

You had to see Bo Jackson to believe how good he was.

Bo the football player could break free for a 70-yard run and make defensive backs look like they were standing still. Or he could square his shoulders and bulldoze his way through a linebacker. He had the power of an oxe and the speed of a deer.

Bo the baseball player was less complete. Baseball requires more subtle skills, in many cases more refined and well-honed skills. Jackson could look bad at the plate, especially when pitchers tossed an off-speed pitch low in the zone. But his natural abilities transferred to the diamond and made him an amazing baseball player too. After he shocked the sports world by announcing that he’d play baseball rather than pursue an NFL career, Jackson spent only 53 games in the minor leagues before earning a call to the big leagues with the Royals. The naysayers were many: they were waiting for Bo to fail.

That was where he was in April of 1987 when Jackson began the season as the Royals starting left fielder. He was an unknown on the baseball field. Could he hit big league pitching on a consistent basis? He’d had a short taste of the major leagues the previous September, playing in 25 games but looking nervous and overmatched. he hit only .207 and struck out in 1/3 of his plate appearances. Even in the field Bo was shaky as he made four errors in only 23 games in the outfield. Some began to say Bo would be better off wearing shoulder pads than a baseball glove.

Jackson seemed determined to prove the skeptics wrong in his first full season in the big leagues. In the second game of the season he had two hits against the White Sox and two days later he had four hits against the Yankees, driving in three runs. One of his hits was a groundball to second base which he beat out with his blazing speed.

“I’ve never seen that before,” Yankee manager Lou Piniella said, referring to Bo beating out a routine grounder to the right side of the infield. “The man has unbelievable speed.”

Bo had eight hits in Kansas City’s three-game series against the Yankees, including his first homer of the season. Then the Royals welcomed Detroit to town and the Tigers got their first look at Jackson. Sparky Anderson, never one to shy away from making daring d eclarations about young players, used uncharacteristically measured words.

“He’s [Bo Jackson] an amazing athlete and I think he’ll [be a good ballplayer], but it can take time when you’re learning a lot at the big league level,” Sparky told reporters before the first game of the series.

It was a Tuesday, April 14, and Jackson was batting sixth in Billy Gardner’s order that evening. Dan Petry started on the hill for the Tigers but he didn’t have a great evening, allowing a leadoff single to Willie Wilson in the first and a triple to Kevin Seitzer before anyone was out. George Brett hit a sacrifice fly and quickly the Royals were on top by two runs. In the second inning, Jackson singled up the middle off the Detroit right-hander. But that was just the start of his stellar evening. The next inning the Royals had runners on first and third with two outs when Jackson clubbed a home run to left field to give KC a 5-0 lead. The ball left the field so quickly it might have given Petry whiplash.

In the fifth inning Jackson pestered Petry again, leading off the frame with another sharp single up the middle, his third hit of the game. After Steve Balboni struck out, Jackson took off for second base during the next at-bat and easily swiped the bag. he had now showed off both his power and his speed. Petry was no longer in the game when Jackson came up in the sixth inning. This time the Royals had the bases loaded thanks to a single and a walk surrendered by Petry and a costly error by third baseman Darnell Coles (his second of the night). Sparky waved in reliever Nate Snell, a rail-thin right-hander. Snell started Jackson with breaking stuff, but when he fired his first fastball Bo was ready for it, smacking the pitch to center field for a grand slam. It was Jackson’s second homer of the game (his fourth hit) and it gave him seven runs batted in. The Royals went on to beat the Tigers soundly, 10-1. Jackson didn’t get a chance to go for a fifth hit, he was on-deck when the Royals made their final out of the eighth inning. But his first big game in the big leagues was a great coming out party and it made a believer out of Sparky.

Bo didn’t keep his average over .400 of course, in fact he finished the ’87 campaign at .235, but he hit 22 home runs despite missing five weeks with injuries. That summer he announced he would join the Los Angeles Raiders as a fullback after he finished his season with the Royals. He would forego football training camp completely, instead finishing his baseball season and going directly to the NFL. It was unprecedented and it seemed impossible. In his second game with the Raiders, Bo ran for 74 yards on 12 carries. In his fifth game he ran for two touchdowns and 221 yards on only 18 carries against the Seahawks. He supplanted Marcus Allen, a future Hall of Famer, as the primary running threat on his team.

Jackson was never a novelty. He was an All-Star in baseball (in 1989 when he hit a home run in the first at-bat of the game) and an All-Pro for the Raiders in 1989 and 1990. In three of his four NFL seasons he had the longest run from scrimmage, scampering off for 91, 92, and 88 yards. In baseball he hit a 465-foot homer at Yankee Stadium and he hit the first ball to completely go out of Royals Stadium. On a play against the Mariners, Jackson fielded a hit on the warning track and threw it on the fly to home plate to nail the runner. It seemed as if every week he was doing something that no one had ever seen on a baseball diamond, and then when the season was over he switched uniforms and became the NFL’s most exciting offensive weapon.

An injury on the football field in 1990 essentially ended the jaw-dropping portion of Bo’s career. He came back from the injury but he was never the same. But for a few seasons, Bo Jackson showed why he was the best athlete of the last half of the 20th century by displaying his skills on both the diamond and the gridiron.