Calvin Johnson is a Hall of Fame wide receiver 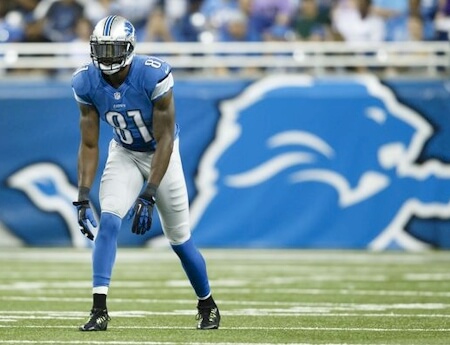 Calvin Johnson stood alone among wide receivers in the NFL during his nine-year career, setting records and changing the way the position was played.

This fall will be the first time in a decade that the Detroit Lions will not have a Transformer on their roster. Calvin Johnson, known by the awesome nickname “Megatron,” announced his retirement last week. An era is over.

There has been speculation about Johnson’s place in history, with some claiming he might not earn election to the Pro Football Hall of Fame. The main argument seems to be that Johnson didn’t accumulate enough yardage.

A Football Hall of Fame without Calvin Johnson would be a joke, a farce, and a sham. A “jafarham,” if you will.

I recognize that the Pro Football Hall of Fame has a reputation for making seemingly worthy candidates wait a while for election. That they have been tough on wide receivers in some instances. But Johnson is a Hall of Famer any way you measure it, and let me tell you why.

#1. The talent and the style of play

Before he even put on shoulder pads in the National Football League, it was apparent that Johnson was special. At Georgia Tech he towered over his competition. He was taller, stronger, had bigger hands, and could run and jump faster than the defensive backs who had to cover him. His coaches couldn’t believe a man THAT BIG could run so fats and be so acrobatic and athletic. At 6’5 and nearly 240 pounds, Johnson ran a 4.35 in the 40-yard dash. He was only a few pounds lighter and much taller and more athletic than most linebackers. But he could run as fast as almost anyone on the field.

Calvin Johnson helped revolutionize the way the wide receiver position was played in the NFL. While tall receivers had been coming in to the league for years, Johnson’s height and overall size, combined with his leaping ability and speed, was unusual.

But having talent alone obviously doesn’t make you a Hall of Famer. It’s the players who take that talent, respect it, and work hard to improve on it who rise to the next level. Johnson was a freakishly talented athlete who also put up the numbers and had the performances to help his team. For example…

In 2012 Johnson had the best single season by a wide receiver ever. That year he didn’t make his first touchdown catch until Week #3 against the Titans when he snared ten passes for 164 yards in a wild 44-41 loss. Seven weeks into the season he had 638 yards and still just that one TD catch. But then he went on an unparalleled run of success: from Week #8 to Week #15 he had 1,254 yards in receptions, topping 118 yards in each game. Against the Vikings in Minnesota, Johnson faced a triple team and still managed 12 catches for 207 yards (he was targeted only 13 times). In Week #15 against the Falcons, he caught 11 passes for 225 yards. The next week against the Bears he broke Jerry’ Rice’s single-season yardage record (1,848) and extended the mark to 1,964. That season he was targeted 204 times despite facing double and triple team coverage, and still caught a league-high 122 balls. His 122.8 yards per game average was a new NFL record. That season may never be eclipsed and to consider that Johnson did it will being pestered most of the year by at least two defenders, it’s astounding.

Where do I start? Johnson had so many incredible performances.

There’s the game during the abysmal 0-16 season when Calvin went for 154 yards against the Texans despite having the ball thrown in his direction four times and making two catches.

He caught three touchdowns in a win over the Redskins in 2010, a feat he matched last season against the Eagles in the Thanksgiving game.

On New Year’s Day in 2012, in one of the most exciting games in recent Lions history, Johnson and Matthew Stafford hooked up for a legendary performance in Green Bay. That day, with the Lions trying to break their epic losing streak in Green Bay, Johnson caught 11 passes and accumulated 244 yards as he jumped over and streaked past the Packer defense.

In his record-setting 2012 season, Megatron had six games where caught at least ten passes.

In 2014 in the annual Thanksgiving game in Detroit, Johnson was good for 11 catches for 146 yards and two touchdowns in a Lions win over the Bears.

But Johnson’s best game, the pinnacle of his career, came against Dallas at Ford Field on October 27, 2013. That was the game where Stafford thrust the football across the goal line with 12 seconds left to complete a comeback win over the Cowboys. But it couldn’t have happened without Johnson, who caught a career-best 14 passes for an amazing 329 yards. His yardage total through the air broke the Lions franchise mark for a single game (previously held by Cloyce Box, December 3, 1950) and it was just the fifth time a WR had topped the 300-mark. Johnson’s 329 yards were the second-most ever in an NFL game, but the most ever in a regulation game.

#4. Yards after the catch

One defender said of Johnson: “It doesn’t look like he’s running hard, but then you’re out there and he glides past you.”

Calvin definitely had that “easy” stride that made it look like he wasn’t even trying to run fast. But he was very quick and with those long legs it only took him maybe two strides to be several yards ahead of a defender who couldn’t match his pace at covering the field. With his size, Megatron was also able to deliver a hot on much smaller defensive backs and gain more yardage. Some of his runs almost look like a very tall running back plowing through the defense.

For much of his stellar career, Calvin Johnson was double-teamed. Opposing teams simply had no choice: it was impossible for one defensive back to effectively cover Megatron. In nearly every game he played, #81 was single dout by the defense as the player to be stopped. Despite that special treatment, Johnson managed to top 1,000 yards in seven of his nine seasons. He led the NFL in receiving yards twice and in catches once.

Johnson was the quickest to reach the 8,000, 9,000, 10,000, and 11,000-yard marks for wide receivers. He holds the single-season receiving yards record and only one other player has ever come within 100 yards of it. His 329-yard game stands out as one of the best single-game performances in NFL history. He made the Pro Bowl in each of his last six seasons and was first-team All-Pro wide receiver three times.

Johnson ranks 27th all-time in receiving yards, and certainly if he had chosen to play longer he would have probably risen to the #2 slot, behind only Jerry Rice, who amasses more than 22,000 yards. Johnson needed only 4,300 more yards (probably four more years running through his age 34 season).

While YPG leaders (yards per game) are dominated by recent wide receivers because the ball is being thrown more, Johnson’s YPG of 86.1 ranks #2 all-time behind only Julio Jones, who at 27 will probably see that average dip as he puts more seasons under his belt. There’s no question that Johnson is statistically one of the best in the history of the game.

Sure, the Lions only made the playoffs twice in Johnson’s nine seasons in Motown. But that was hardly Calvin’s fault. In his two playoff games, Megatron made it count: he averaged nearly 150 yards and had two touchdowns, both in 2011 in Detroit’s loss to the Saints, when Johnson snared 211 yards through the air. He was a monster that day. He went 5-for-85 three years later in the Lions heartbreaking loss to the Cowboys in the NFL Playoffs.

The Pro Football Hall of Fame has enshrined several players who had careers of nine or fewer seasons who put up inferior numbers to those racked up by Calvin Johnson. Few of those players had the tremendous talent nor the eye-popping performances that #81 of the Lions put up. The Hall of Fame should induct Johnson when he becomes eligible, otherwise that institution can’t be taken seriously.