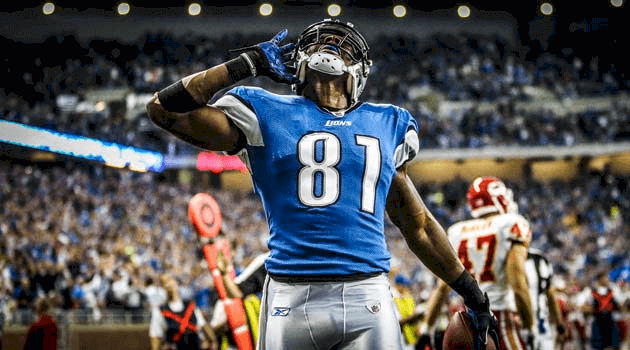 The Detroit Lions will have to make due without Calvin Johnson, a once-in-a-generation talent known as “Megatron.” On Tuesday he made official what many had feared since the end of the 2015 season: he is retiring from the National Football League.

Without winning a single playoff game in his near decade-long stint with the Lions, Johnson will go down as the best wide receiver in the franchise’s not so storied history.

Number 81 was no “local hero,” either, he rates among the best at his position in league history. The 6-foot-3 Georgia Tech product put up numbers that rank favorably with the best receivers on other franchises much richer in tradition.

For instance, let’s compare him to the best all-time receiver from three of the winningest teams in NFL history: the Dallas Cowboys, New England Patriots and Pittsburgh Steelers.

In comparison to those three gentlemen when it comes to career receiving yards, Johnson ranks third with 11,619 yards, trailing Irvin’s 11,904 and Ward’s 12,083 career reception yards — both of whom accumulated those figures in 10-plus years in the league (Irvin played for 12 years with the Cowboys). Johnson played just nine seasons. His per season average of 1,219 yards is among the top five in NFL history.

It’s just too darn bad that the 30-year-old never got the chance to play for any of the aforementioned franchises, especially the Patriots and Steelers. If he would’ve had the chance to play for a franchise like the Pats or Steelers, he would’ve had the opportunity to play in playoff games where he could’ve put up numbers that catapulted him into the conversation of all-time greats at the wideout position.

It’s something that Arizona Cardinals WR Larry Fitzgerald has been able to do through nine postseason games and one appearance in the Super Bowl. For his postseason career as a whole, the former University of Pittsburgh wideout has accumulated 942 yards and 10 touchdowns.

In contrast, Johnson posted 296 yards and two touchdowns to his playoff ledger, albeit in only two games. Faorly impressive, but not all-time worthy, through no fault of his own. The Lions simply didn’t get into the NFL postseason tournament enough.

Drafted second overall in the 2007 draft, Johnson injected life into the Detroit fanbase, one which, at the time, was barren of impact players. Despite the subsequent year’s infamous 0-16 campaign for the Lions, Johnson was a bright spot, showing signs of All-Pro caliber form with a league-high 12 touchdown catches and the first of seven 1,000-plus yard seasons (1,331 yards in ’08). It was also the first of four campaigns in which he ranked in the top five league-wide for receiving yards.

Seriously, what other player were fans going to root for from that ill-constructed roster by former team president Matt Millen? #81 quickly became the “jersey of choice” for this generation of Lions fans. Like Barry Sanders before him, Johnson gave Detroit fans a reason to tune in on Sundays, even if the team was dismal.

Now unfortunately, Johnson joins Sanders as superstars who chose to exit far too soon. Barry’s sudden ad unexpected retirement just weeks before training camp was set to start in 1999 stunned the Lions and their fans. It was so bizarre, many people thought it was a hoax. But it was all too true, and just days after his 31st birthday, the great running back was gone, just like one of the dazzling spin moves he employed on linebackers. Poof!

Johnson’s retirement is not nearly as shocking and so far it has been met with far more acceptance than that of Sanders. (There are many in Lions Nation who still consider Barry a quitter). Megatron will be missed, but few are blaming him for making a decision that seems to be based solely on his longterm health and happiness. Still, the loss of #81 will create a big hole, both in the Detroit offense and in the hearts of the team faithful.

It’s important to remember that other fan favorites of recent memory, such as quarterback Matthew Stafford and former Lions sack artist Ndamukong Suh, didn’t come along until after Johnson. Stafford was drafted by the Lions with the first pick of the 2009 draft while Suh joined the Lions a year later via the second pick in the 2010 draft. Understated as he was (and he was a very shy superstar), Calvin was the senior member of the franchise.

When it comes to Johnson’s Hall of Fame candidacy much will rest on his three consecutive seasons of high-impact play from 2011-13, which included three First-Team All-Pro selections plus an historic 2012 campaign in which he broke NFL Hall of Famer Jerry Rice’s single-season reception yards record, compiling an eye-popping 1,964 yards. For those peak seasons, Megatron averaged 1,712 yards on 101 catches, with 11 touchdowns.

Yet, in my opinion, Johnson’s early retirement hurts his chances of being enshrined in Canton, Ohio. As it is now, his career stat line probably falls a little short of enshrinement, and his peak years span only those three NFL campaigns. Had he decided to suit up and risk going across the middle for, let’s say three more years while putting up around 800 yards per season, he likely would have punched his ticket to the Hall.

Regardless of whether Johnson receives the call from Canton, his legacy in Detroit will always be positive, and not just for his on-field exploits. His charitable work for the Calvin Johnson Jr. Foundation secures his lasting impact in this city. Through his foundation, whose mission is “to change the mindset of youth from struggle to survival, from poor self-esteem to excitement of life, from dependent thinking to goal setting self-sufficiency, and from hopelessness to empowerment,” he’s reportedly provided scholarships and “book awards” to 36 student-athletes since 2008.

Additionally, according to his foundation’s webpage, toy drives sponsored by the foundation have supplied holiday gifts and “personal care packages” to over 200 hundred homeless children and children of “incarcerated women.”

That charitable work has earned Johnson respect from other athletes in Motown.

“Obviously he’s a Detroit sports icon,” Tiger pitcher Justin Verlander said this week from spring training. “He meant a lot to the city. It sucks they weren’t able to win a championship with an athlete of his caliber, but he left his trademark on the game and his trademark in Detroit. He’ll always be something special in the city.”