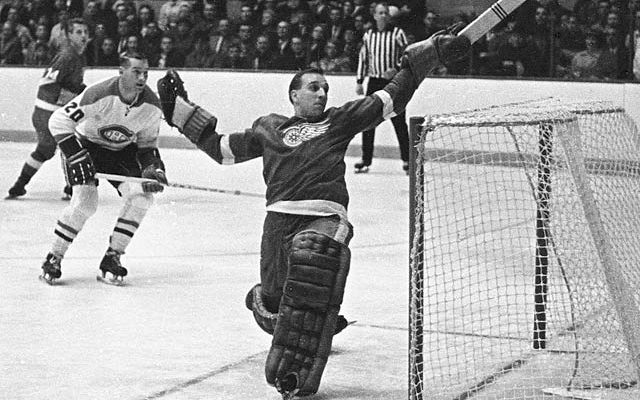 This season the Detroit Red Wings have split their goal play between veteran Jimmy Howard and the younger, more promising(?) Petr Mrazek. It’s been more of an effort to find a hot hand in the net than a case of talent overload. At any rate, by the end of the season the Wings will hopefully have a goalie who has emerged to claim the job and lead them to a deep run in the playoffs.

Fifty years ago the Red Wings started the same goalie in every game of the season. It remains the last time an NHL team did that for an entire season.

Roger Crozier came to Detroit in a trade with the Black Hawks that sent troubled tough guy and former Sports Illustrated cover boy Howie Young out of Motown. It took Detroit a year or so to season the young Crozier for play in the National Hockey League, and he was so highly regarded the team left Terry Sawchuk unprotected in the waiver draft. At the age of 22, Crozier was the starting goaltender for the Red Wings.

In that rookie season, Crozier started each of Detroit’s 70 games and his play opened eyes around the league. He was not only named Rookie of the Year, he was also placed on the NHL First All-Star Team. His 2.42 GAA was second in the league and his 40 wins and six shutouts paced the league. But in the playoffs he allowed 3.29 GAA and the Red Wings lost to the Black Hawks in seven tough games.

But Crozier’s sophomore year would result in an unlikely slog through the Stanley Cup Playoffs, though not without drama. Crozier missed the start of the season when he suffered from pancreatitis. But Crozier was not 100 percent on his return and the team limped to a 1-5-3 record in the first three weeks of his return to the crease. But once he was back to form, the 23-year old paced the team to 20 wins in 25 games from late November to late January. In ten of the 25 contests, Crozier allowed zero or one goals.

Yet the 1965-66 Wings were not a consistent team. After the hot two-month stretch, the team won only eight more times, going 8-15-7 to finish fourth. But it was still good enough to squeak in to the playoffs, earning a meeting with the Black Hawks once again. Crozier suffered a tough 2-1 loss in the opener in Chicago, but the team bounced back to win four of the next five games to advance to the Stanley Cup Finals.

The Wings opponent in the 1966 Finals was their old rival, the Montreal Canadiens. Facing a powerful Montreal attack, Crozier stifled the Habs in the first two games, making 51 saves as the Red Wings took a 2-0 lead in the series and were heading home. Crozier’s play in the net frustrated the Canadiens and established him as the most exciting young goalie in the game. It seemed as if his play would carry Detroit to a title. Like a starting pitcher who gets hot in the postseason, Crozier was an unflappable stopper in the net.

The Canadiens won Game Three in Detroit 4-2, which set up an epic clash in Game Four at Olympia Stadium. In that contest, Crozier started out red-hot and after an early goal the 1-0 lead seemed like it would be sufficient to give the Wings a commanding lead in the series. But then Crozier was ambushed by a duo of Montreal skaters and fell awkwardly to the ice after making a save. He’d injured his leg and was unable to finish the game. Montreal scored twice on backup goalie Hank Bassen and won the game 2-1 to even the series. Crozier returned for Game Five two days later in Montreal, but five shots got past him and the Canadiens won 5-1 to take a 3-2 lead. A few days later the Wings lost 2-1 in overtime back in Detroit and were forced to watch the Canadiens hoist the Stanley Cup on their ice.

Despite the crushing defeat, Crozier was obviously the main reason the Red Wings had gotten to within an eyelash of winning the title. He was awarded the Conn Smythe Trophy as the MVP of the playoffs, the first goalie to win the honor, and the first player on a losing team to get it.

After his magical run in the playoffs, Crozier was still just 24 years old and a superstar. It was expected that he would be a force in the league for years to come. But injury and adversity stopped that from happening. The following year he suffered from pancreatitis again, missing more than a month. The next season Crozier was hit in the head by a shot from Bobby Orr on opening night, suffering an injury that he may have never recovered from.

“Maybe I’m more tired than usual, I really don’t know, but I can’t say until I’ve played some more,” Crozier said a month after the concussion when his play was eneven.

The Red Wings missed the playoffs entirely in 1967, 1968, and 1969. It got so bad that Crozier announced his retirement in 1968 after injuries sidelined him. He “unretired” six weeks later but he never played at a high level again and in 1970 Detroit traded him to the Buffalo Sabres. Crozier played nearly a decade in the NHl after leaving Detroit, with split results. In 1975 he played in the net for Buffalo as they advanced to the Stanley Cup Finals, but he was denied a championship once again.