Detroit was Patch City in 1951 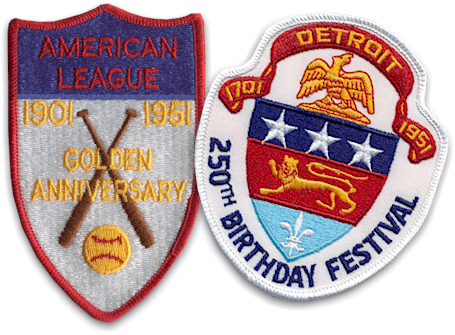 The Detroit Tigers wore both of these patches during the 1951 season.

Think of it as the season of the patches. In the summer of 1951, the Detroit Tigers wore not one, but two, commemorative patches on their uniform.

Each one told a story. The American League Golden Anniversary patch commemorated the half-century that had passed since the American League had officially become a major league in 1901, putting the upstart “Junior Circuit” in direct competition with the established National League. Members of all eight A.L. teams wore the patch throughout the 1951 season.

Paced by the automotive industry, Detroit was a thriving metropolis in 1951, and the Tigers were coming off a torrid pennant race that had seen them lead the pack for most of the 1950 season before eventually finishing three games behind the Yankees after a forest fire actually impacted the outcome of a game.

Detroit was a proud charter member of the American League, as well as its predecessor, the Western League (formed in 1894). After a sputtering start in the late 19th and early 20th centuries, the Tigers had grown into one of the major leagues’ most stable and successful clubs, both at the gate and on the diamond. Under owners Frank Navin and Walter O. Briggs, the club had won seven pennants, captured two world championships (in 1935 and 1945), and regularly fielded competitive teams featuring some of the game’s greatest names, such as Ty Cobb and Hank Greenberg.

Moreover, the Tigers enjoyed the distinction of being the only American League team never to have finished last. (That would change the following summer, when the woeful ’52 squad dropped 104 games.)

The Tigers wore a second patch that year, as 1951 also marked 250 years since the founding of the City of Detroit. On July 24, 1701, Antoine de la Mothe Cadillac and a few dozen high-smelling companions had parked their canoes in the vicinity of what is now Hart Plaza. To celebrate, civic-minded Detroiters staged the 250th Birthday Festival, a year-long series of special events that included that summer’s All-Star Game.

The Tigers had last hosted the game ten years earlier, in 1941. Normally Detroit would have had to wait a few more years for its turn, but the combination of Detroit’s civic celebration and Walter Briggs’s rapidly declining health (he would die the following January) was reason enough for the Phillies to agree to shift the site from Philadelphia to Detroit. (The Phillies would host the game the following year.)

Coincidentally, 1951 also marked the 75th anniversary of the National League, and to commemorate the fact all members of the “Senior Circuit” wore a patch. Organized baseball’s oldest league had started play in 1876.

All three patches were on display on July 10, 1951, as the National League defeated the American League, 8-3. Ty Cobb tossed the ceremonial first pitch, hometown boys George Kell and Vic Wertz poked home runs, but there was still an element of sadness around the ballpark. The day before, popular outfielder-turned-broadcaster Harry Heilmann had died of cancer at Henry Ford Hospital. In honor of “Ol’ Slug,” the crowd of 52,075 observed a moment of silence before the game started.

Aside from the All-Star contest and Bob Cain pitching to a midget that August in St. Louis, the rest of the season was utterly forgettable for the Tigers and their fans. Hal Newhouser, the ace of the staff, blew out his shoulder, and injuries to other key players caused the team to lose eight more games than it won. As colorful as the patches were, the ’51 Tigers could have finished fifth without them.