Circle these dates on the Tigers’ 2016 schedule 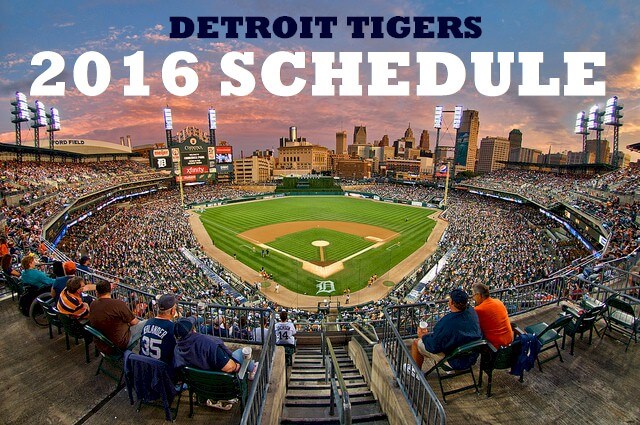 What do you do when you miss baseball and it’s still nearly three months until the Detroit Tigers regular season begins?

You circle some dates on the calendar.

This week Major League Baseball announced game times for the 2016 season and as a result most Tiger fans know what they’ll be doing and who they’ll be watching for six months starting in April.

Here’s a look at the highlights of the Tigers 2016 schedule.

April 5th at Miami:
The Tigers commence their 116th season in the American League in sunny Miami facing the Marlins. It’ll be a short trip from Lakeland. Expect Justin Verlander to be back on the hill after a one-year hiatus from starting on opening day. It would be his eighth start on opening day, breaking a tie with Mickey Lolich and placing JV third on Detroit’s all-time list of most opening day starts behind Jack Morris (11) and George Mullin (10). The opener will be a night game.

April 8th at home against the Yankees:
There’s nothing like a home opener in Detroit, the city really treats it like a holiday. The Tigers will get to face the Bronx Bombers in front of the home crowd in a game that starts at 1:05 PM.

April 11th – 14th, Comerica Park and PNC Park in Pittsburgh:
The Tigers first taste of interleague play in ’16 will be a home-and-home series against the Bucs. Detroit dosn’t really have a natural NL foe, but the Pirates are probably the closest. Back in 2012 when these two teams met in Detroit, Verlander nearly threw his third no-hitter in a game that might have been his most dominating ever. First two games are in Detroit before switching to the Steel City at PNC Park, which is one of the most beautiful ballparks in baseball.

April 19th – 21st, at Kansas City:
The Tigers get their first look at the defending World Champion Kansas City Royals, a team that dethroned Detroit for AL Central supremacy. The two teams will square off against each other nineteen times in 2016. Over the last two years the Tigers hold a 22-16 advantage over the Royals, and the two teams could very well battle all season long for the division title.

May 9th – 11th, in Washington D.C. :
For the first time since he signed a megadeal with the Nationals, Max Scherzer will probably get a chance to face the Tigers at some point in this four-game series. Expect some interesting glances out to the mound from Miggy, VMart and the other Tigers who played alongside Max.

June 10th – 19th, various cities on the road:
It’s the first long road trip of the season for Detroit, as the team plays ten games in three cities over ten days, bouncing from New York to Chicago to Kansas City. This stretch should tell us a lot about Brad Ausmus’s team as they settle into the grind of the summer.

June 28th & 29th, Comerica Park against the Marlins:
This is the only time the Marlins are visiting Detroit in 2016. So, who cares right? Well, you could see some history. Ichiro Suzuki enters the 2016 season 65 hits shy of 3,000 for his career in major league baseball. Depending on how much he plays or how well he does, he could be going for the magical #3000 in Detroit. Even if he’s not, it’s probably your last chance to see Ichiro playing baseball in person in Detroit. It’s also your last opportunity to see the Tigers at home before the All-Star break, they embark on an 11-game road trip the next day which leads up to the All-Star Game on July 12th.

July 25th – 27th, at Fenway Park in Boston:
The Tigers visit venerable Fenway Park for the only time in 2016. The old ballpark is always fun, but this matchup takes on added meaning with so many former Tigers in Boston. There are two starting pitchers, David Price and Rick Porcello, but then there’s general manager Dave Dombrowski, who will definitely want to beat his old team after he was let go by Mike Ilitch last season.

August 5th – 7th, hosting the Mets:
The NL champion Mets will be in Motown for a three-game weekend series. This is a great chance to see excellent young pitchers like Matt Harvey, Jacob deGrom, and Noah Syndergaard.

August 15th – 21st, Comerica Park hosting the Royals and Red Sox:
The great home baseball continues in August as the Tigers host the Royals for a Mon-Wed series and then welcome Dombrowski and his Red Sox into Comerica Park for a weekend four-gamer. First we get the pesky Royals at Comerica Park, then we might see Verlander vs Price, Sanchez vs Porcello, with Miggy squaring off against his former teammates, etc. Should be lots of fun, plus these three teams are all expected to be in the playoff hunt.

August 26th – 28th, hosting the Halos:
This is your only chance to see the great Mike Trout in Detroit in ’16.

September 23rd – 29th, at home against the Royals and Indians:
This is the last homestand of the season and against two division rivals. Could decide whether the Tigers will return to the playoffs again.

October 2nd, in Atlanta:
As they did in 2013, the Tigers will end the season on the road against a National League team. Someone has to do it, and unfortunately Detroit draws that straw again. This is a three-game set against the Braves, who lost 95 games last year and probably won’t be much better. Odds are, if the Tigers are in the hunt for a postseason spot they will have a good chance of beating the Braves as the 2016 season draws to a close. Once again, every game on the final Sunday of the season will start at the same time, to add to the possible drama of Game #162.

Which games are you planning to see in 2016? Leave a message below.