Aloha! Here are the five Tigers who were born in Hawaii 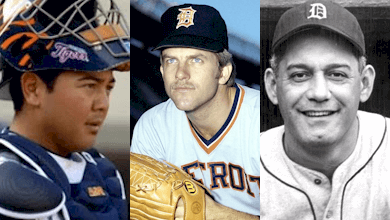 Dane Sardinha, Milt Wilcox, and Prince Oana were all born in Hawaii.

In their long history, the Detroit Tigers have featured a total of five Hawaiian-born players.

Some of the names you probably remember.

Others are more obscure.

And no, Tom Selleck is not one of them.

Here’s a quick look at each one.

Believe it or not, the Tigers can rightfully claim trailblazing status when it comes to players hailing from the Aloha State. A fellow by the name of Johnnie Williams was the first ever major league player from America’s 50th state.

Actually, this would have been long before Hawaii even became a state. Back in 1914, when Williams suited up for Detroit, it was still officially known as the Territory of Hawaii, technically annexed to the United States. Williams was born in Honolulu in 1889, when the island was still an independent kingdom, ruled by Liliuokalani, Hawaii’s last monarch.

Williams’ father was British-born, and had arrived in Hawaii by way of Cleveland and San Francisco. As for Williams’ mother, we don’t know much about her. But we do know that her name was Julia Agnes Wills. She was born in Maui, and her mother was a native islander, whereas her father was not, thus making Johnnie Williams one-quarter native Hawaiian on his mother’s side. That is significant, because it makes him the first major league player of Pacific Islander or Asian ancestry.

“Honolulu” Johnny, as he came to be known in later years, was a right-handed pitcher, and the extent of his big league career was four games with the Tigers. Williams had what is known as a swarthy complexion, and legend has it that Ty Cobb refused to take the field with him, but most baseball historians don’t give much credence to that tale.

The Tigers had purchased his contract for $12,000 from Sacramento of the Pacific Coast League, where he’d won 17 games the year before. With Detroit, he lost two games, won none, and finished with an ERA of 6.35.

Henry Kawaihoa Oana, also known as “Prince,” was the next Hawaiian player to play for the Tigers. Born in Waipahu, Oana began his baseball days as an outfielder. Another legend involving Ty Cobb is that he “discovered” Oana when the Georgia Peach took a barnstorming trip to Hawaii in 1928.

Oana established himself as a solid hitter with the San Francisco Seals of the PCL in the early 1930s. He had a reputation as a bit of a playboy; some believe the big league teams shied away from him because of that. By the time he wound up with the Fort Worth Cats in the Texas League in 1942, he was already 32 years old with seemingly no shot at the majors.

But Fort Worth’s manager that season was Rogers Hornsby, the man with the highest lifetime batting average among right-handed hitters. Oana had always liked to warm up along with the pitchers, and he’d even gotten into seven games on the mound the year before. Hornsby liked Oana’s stuff. One day he told Oana that he should seriously consider re-inventing himself as a full-time hurler. So he did.

By 1943, with major league rosters depleted due to World War II, Oana got his chance with the Tigers. He pitched in 10 games that summer, winning three and losing two, with an ERA of 4.50. He also saw action in a few games in 1945, but that was it. He went back down to the minors, where he pitched for the next several years before calling it quits.

The next Hawaiian-born Tiger is no doubt the most well-known, and his name was Milt Wilcox. Here is a bit of trivia: Who holds the most all-time wins among Hawaiian-born pitchers? If you guessed Wilcox, you lose. However, he is third on that list with 119. Number one is knuckleballer Charlie Hough with 216, followed by Ron Darling (yes, that Ron, darling) with 136. However, Wilcox does hold the Hawaiian-born record with 66 intentional walks, which must count for something (Visions of Sparky Anderson ordering Wilcox not to pitch to George Brett are dancing in my head).

Wilcox will always hold an ignominious place in my own heart. Growing up, it seemed like every game my Dad and I went to at Tiger Stadium, Wilcox was on the hill. It was only an annoying coincidence, but frustrating for a kid like myself who would have rather gotten an occasional glimpse of Jack Morris, or even Dan Schatzeder.

Wilcox, born in Honolulu, showed a lot of moxie by pitching through arm troubles to win 17 games for the Tigers during the World Series-winning 1984 season. His finest hour was when he threw a two-hit gem against Kansas City in Game Three of the 1984 American League Championship Series, completing Detroit’s three-game sweep to advance to the World Series. He also pitched well in Game Three of the Series against San Diego, picking up a win.

Next we have Brandon Villafuerte, who pitched in three games for the Tigers in 2000, with no decisions and a 10.38 ERA. He had a five-year big-league career, with four different teams. He was born in Hilo, but went to high school in California. The Mets drafted him in the 66th round of the 1994 draft. He pitched 16 years in the minors. He is currently a computer technician in Tucson, Arizona.

And finally, there was the immortal Dane Sardinha. He is not the only Sardinha to hail from Hawaii. The other one, not related to Dane, was Bronson Sardinha, who played a handful of games for the Yankees in 2000. I only mention Bronson Sardinha because he no doubt has the longest middle name in major league history (or any history, in fact). It is a real mouthful: Kiheimahanaomauiakeo. Good thing they don’t put middle names on the backs of uniforms.

As for Dane Sardinha, he was also from Honolulu, and attended Pepperdine University. A catcher (and thus the only Hawaiian-born position player for the Tigers), he played in the Motor City in 2008 and ’09 for a total of 29 games with a .133 average. He also spent time with the Reds and Phillies. In 2013, Sardinha inked a contract to play for the Hawaii Stars of the independent Pacific Association. The team was managed by Garry Templeton, Jr., whose old man, Garry, Sr., was the shortstop on the 1984 Padres, who lost to the Tigers in the World Series.

So the next time you visit the islands, raise a nice, cool Blue Hawaii in honor of “Honolulu” Johnnie Williams, Prince Oana, Milt Wilcox, Brandon Villafuerte, and Dane Sardinha.

Ok, and Tom Selleck, too.