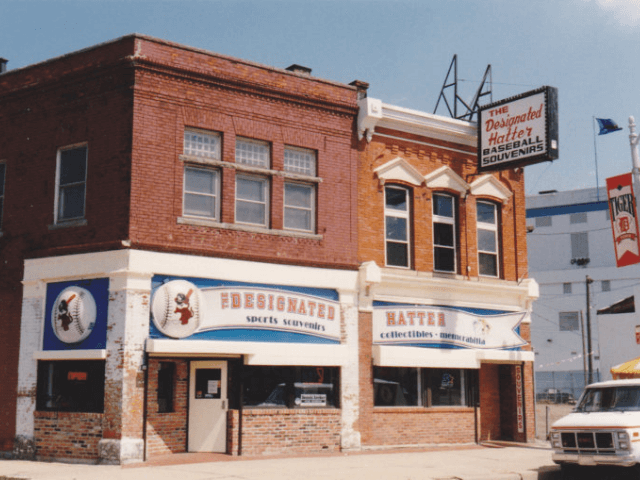 After nearly 40 years of serving Detroit sports fans with vintage sports apparel and souvenirs in an 1879-built building just one block west of the famous ballfield at Michigan and Trumbull, Vintage Detroit Collection (formerly known as The Designated Hatter and Detroit Athletic Co.) is relocating the growing business to a much larger facility in Plymouth and is actively searching for a new Detroit location for a brick-and-mortar store.

The company will continue to offer the largest selection of Detroit sports apparel and nostalgia to Tigers, Red Wings, Lions and Pistons fans from around the world through its popular website, www.vintagedetroit.wpengine.com

“It’s with a bit of sadness that we are leaving Corktown because my family has done business in this neighborhood for 78 consecutive years,” says owner Steve Thomas. “But in order to grow and continue to provide the high level of service our customers have come to expect, we had no choice but to make a move,” he said. “Our lease is coming up for renewal, and after we did an assessment of our operations, we realized that we needed more square footage and more efficient space. The 141-year-old building we’ve called home for so long just isn’t adequate.”

The evolution of Vintage Detroit Collection becoming the pioneer and market leader for Detroit sports nostalgia products in Michigan began when Thomas and his older brother Dave started selling peanuts to fans outside of Tiger Stadium on Opening Day 1982 as 11 and 13-year-old kids.

The next season the brothers entered the souvenir business when they set up a table outside of the ballpark and starting selling hats and helmets from every MLB team along with Tigers souvenirs. 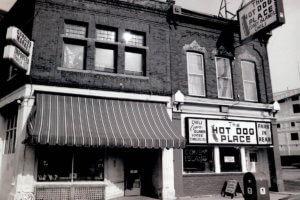 The Hot Dog Place coney island was a neighborhood favorite in Corktown from 1974-1984.

The timing could not have been more perfect for the young entrepreneurs when in 1984 the Detroit Tigers captured the interest of all of baseball with their wire-to-wire, 35-5 start, 104-win, championship season. Fans went crazy for any products related to the “Bless You Boys” team.

The 1984 season provided a 600% increase in sales from the prior year and the family was able to finance the conversion of Sam’s coney island restaurant at 1740 Michigan Avenue called The Hot Dog Place into a new sports souvenir stored named The Designated Hatter.

“My dad provided the business acumen and my mom provided the finesse,” says Thomas, whose mother passed away in March.  “She was so great with our customers and she taught us all about customer service.”

“None of us had any retail experience other than being street vendors,” he added.  “We were used to fast and impersonal sales outside of the ballpark — but my mom created a personalized customer experience that really put The Designated Hatter on the map.  We still have customers who ask about her more than 20 years after she last worked at the store.”

“My mom was ahead of the curve in offering products from vendors specializing in old-time baseball apparel like Mitchell and Ness’s flannel jerseys and American Needle’s throwback hats – brands she brought to Michigan for the first time.  She envisioned something special and unique and that vision still inspires our branding and product selection to this day.”

In 2005, Peter Capolino, the founder of Mitchell & Ness, stopped by the store for a visit.  He was in town for the MLB All-Star Game.  “Peter told me he’s been in stores all over the country and that ours was the best one he’d ever seen,” said Thomas.  “He said such wonderful things and it really inspired me to stick with it.”

When the Red Wings began their string of championships in the mid-’90s the business grew exponentially. The store started customizing Red Wings and Tigers jerseys and then launched a website in 1998. A few years later, a strategic decision was made to make the brand exclusively Detroit-related and to drop the original name that had a distinct baseball connotation.  In 2000, the name was changed to Detroit Athletic Co.

The business has over 70,000 followers on Facebook with customers as far away as Australia, and approximately 60% of the business comes from out of state.

A unique feature of the company website has been a Detroit sports history blog that has produced thousands of compelling, short entries about players from the past with occasional commentary about the current Detroit sports scene.

Although Thomas says it is hard to quantify the extent of which the blog has helped sales, it has resonated well with fans.

“I think the blog has given us credibility, and in some ways, it has become the ‘go to’ source for Detroit sports history,” says Thomas. “It’s not uncommon to see books about Detroit sports and athletes that reference our blog entries.  We have become the keepers of Detroit’s sports archives.” 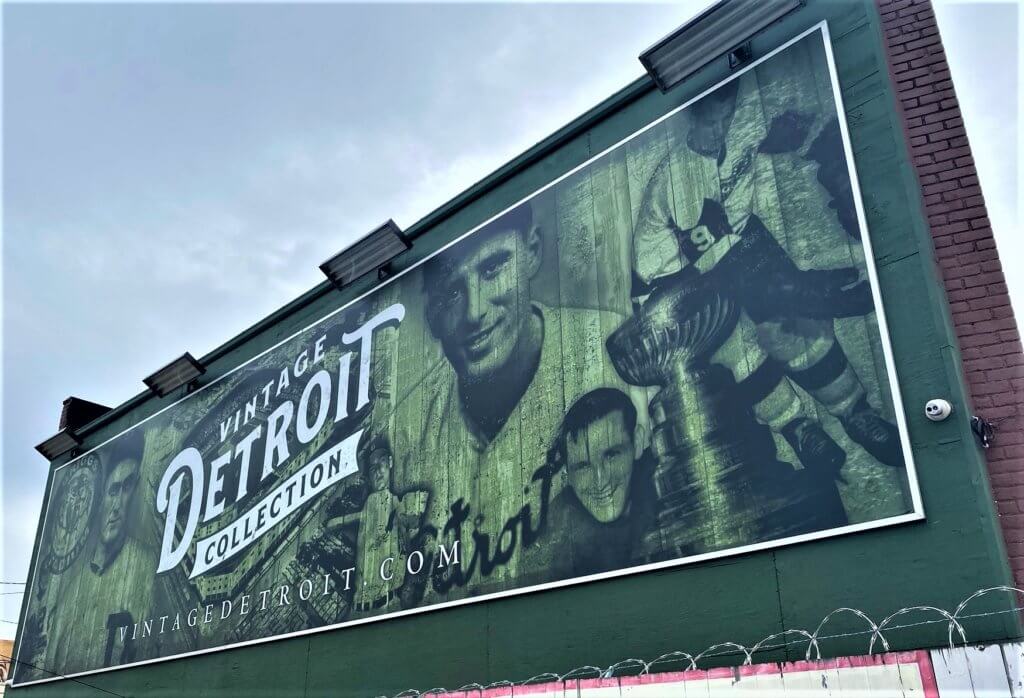 A 64-foot billboard covers the back of Vintage Detroit Collection’s Corktown location.

For the final season of Tiger Stadium in 1999, sales exploded with the launch of the “Baseball At The Corner” apparel and souvenir line which Thomas created and trademarked.  “In many ways, the development of the “Baseball At The Corner” product line is what really distinguished us from the rest.  In addition to our own retail sales of the product, we wholesaled the line to major retailers like J.C. Penney, Dunham’s, Imperial Sports — and it was even sold inside of Tiger Stadium.”

“A lot of customers have told us that a trip to Tiger Stadium wasn’t complete unless they stopped at The Designated Hatter because it was such a tradition and a great experience,” says Thomas.  “We existed for 15 years with the Tigers as our neighbors – and 21 years at the same location without them.  Fortunately, we created a unique brand and a website that has resonated with our loyal customers.”

“It was a book by Bill Gates that inspired the branding change and transition to ecommerce,” says Thomas. “That’s when we changed the business name and began selling items for Detroit’s four professional sports teams exclusively.”

At one point Thomas tried to trademark the name Detroit Athletic Co., but when he was denied certification, the store’s name was changed to Vintage Detroit Collection following a market and branding study.

Thomas looks forward to the new chapter in the continuing evolution of a unique company now in its fourth decade and says he will continue to explore the possibility of opening another store within the Motor City.

“In order to address the demands and expectations of your customers in an ever-changing economy you have to plan ahead, be strategic, and flexible.  Businesses that last for decades are the ones that adjust and adapt to change.  We’re now focused on the next evolution of our business — a business that we and our customers love so much.”