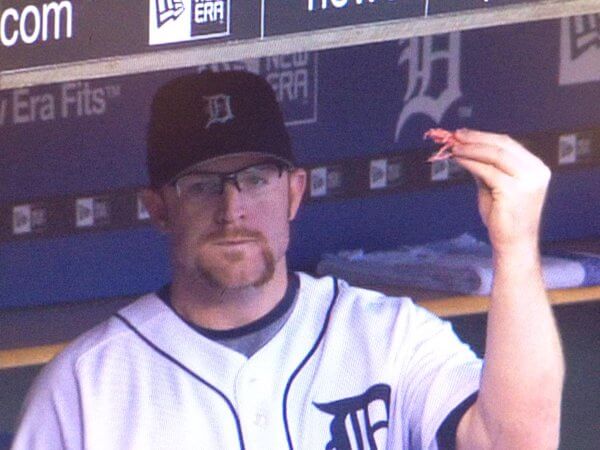 Nate Robertson shows off some of his gum that made for a rally cry during the 2006 season.

Every great team has a memorable run in the postseason, plus a few signature moments in the regular season.
Sometimes the moments are filled with late-inning drama. Sometimes they are something different altogether. For the 2006 Detroit Tigers, it was about a sticky situation…literally.

On May 30, 2006, the Tigers trailed the New York Yankees 5-0 in the fourth inning when Nate Robertson, who was not pitching that day, was preparing to do an in-game television interview with Fox Sports Detroit. He, and Tiger fans everywhere could have never guessed what was going to happen next.

“They put the camera down on me for the moment, and as I’m stuffing the Big League Chew in my mouth, Pudge (Ivan Rodriguez) hits a home run,” Robertson said during the West Michigan Whitecaps’ Tiger Fridays series last week. “It was TV magic. It gave birth to ‘Gum Time.’”

The Tigers rallied to tie the game and force extra innings, but lost 11-6 in 11 innings. Despite the loss, the “Gum Time” rally stuck with Tiger fans. Robertson continued to stuff his mouth full of gum to ignite rallies, then keep rallies going, all season. Whether the rallies turned to wins or not, the gum chewing seemed to be helping as the Tigers were off to their best season in decades and eventually won the American League pennant — their first since 1984.

Robertson said that finally reaching the postseason and eventually the World Series was huge. It gave the Tigers a new identity after so many years of futility. Fans were holding onto the past for dear life and finally had a present to get immersed in.

“The topic was always about the ’84 team, but there’s so many years, consecutive losing seasons, we come back and go to the World Series in ’06 like we did, it was pretty special,” Robertson said.

Robertson was never an ace. In his nine-year career as a major league pitcher, including stints with the Marlins and Phillies, he was 57-77 with a 5.01 ERA. But looking back on his career, he might be most remembered for igniting the “Gum Time” rally that stuck with the Tigers all the way to the World Series.

“The next day there’s signs, they drew pictures of me and a big wad of gum in my face, it was the fans rally cry,” Robertson said. “The passion behind baseball in this state, all across sports, especially Detroit Tiger baseball is incredible, it’s phenomenal. I know it sounds biased, but this is the best baseball fan base in the country, without a doubt.”

And Robertson was happy to help reward them with a pennant.

“It just validated everything that you worked for. In 2003, everywhere we went, we were the laughingstock of baseball,” Robertson said. “Obviously fans, when you’re a visiting team can be pretty harsh, but we grinded through that.”

Grinded through it or chewed their way out of it?