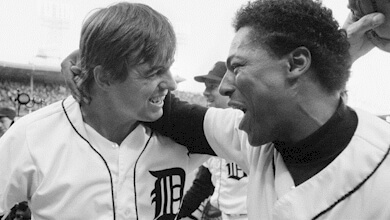 Winning pitcher Frank Tanana is congratulated by teammate Lou Whitaker after the Tigers clinched the AL East on the final day of the 1987 season.

As this season winds down enthusiasm for the Detroit Tigers is at its lowest point in recent years. So, let’s take the long view and think about better times. Wonder what were the most exciting finishes to a Tiger regular season? The answer may depend on the length of your perspective.

For a fan of my vintage, the choice is easy. The most exciting climax to a season was in 1987, when Detroit had to win all three games of the final home series against Toronto to take the division title. Those three tense one-run victories at Tiger Stadium comprised without a doubt the best series I’ve ever witnessed.

I’ve written about this series before, so let’s go further back. Fans of the generations just before mine would no doubt cite 1945 as the most dramatic climax to a season, when Hank Greenberg returned from service in World War II to hit a pennant-winning home run on the last day of the regular season.

Those qualify as the most exciting final series and final regular-season game in Tigers history, respectively. But for the most memorable final weeks of a season, you have to go way back.

At the start of the 1907 season, no one considered Detroit would be much of a factor in the American League—because in their previous six years in the league, they’d finished over .500 only once, in 1905, and in 1906 they were sixth in the eight-team league, finishing twenty-one games out of first. And sure enough, in mid-July of 1907, Detroit was mired in fourth place, seven-and-a-half games out of first, and they had just lost two games to the sad-sack Washington club. But then their offense really caught fire, led by young Ty Cobb, who had joined the team late in 1905, and Sam Crawford, who at age twenty-seven was coming into his prime. Suddenly the club came alive, going 15-3, and they leapfrogged into first place on Aug. 5. Then they stayed locked in a tight race with the Philadelphia Athletics for the next five weeks, with the two clubs trading places in first. On Sept. 19 Detroit headed to New York two games down. The margin wasn’t insurmountable, but the final fourteen games of the season were all on the road. Detroit took two out of three in New York, the rubber game being the start of an incredible eleven-game unbeaten streak in Boston, Philadelphia, and Washington that included a tie against the Athletics. During those eleven games Detroit outscored their opponents 85-41. The win streak ended with a pennant-clinching 10-2 rout in St. Louis on the next-to-last day of the season.

Perhaps the club was exhausted after their long road trip. They were swept in the World Series by the Chicago Cubs.
For 1908, no one took Detroit lightly, but they again got off to a slow start, not taking over first place till mid-July. But by mid-September they had tumbled out of it. Once again, Detroit was two games back with two weeks to go. This time, however, they were enjoying a long home stand. Just as in the previous season, the team reeled off another remarkable ten-game win streak, against three of the same teams: Philly, Washington, and St. Louis, with all the wins coming at Bennett Park. But then Detroit still needed to go to Chicago to clinch the pennant, and after losing the first two to the White Sox, they had to win on the final day of the season. Cleveland was just a half-game back after splitting a doubleheader in St. Louis. On the last day of the season, Cleveland won, but so did the Tigers, 7-0.

It’s long been forgotten but quite remarkable: in back-to-back seasons, Detroit had ten-game winning streaks in the closing weeks to win the American League pennant.

In 1908, once again, Detroit lost the World Series to the Cubs, this time in five games. And those two seasons were, of course, the only two times to date the Cubs have won world championships. So the next time the Tigers have a ten-game winning streak in late September, fans on the north side of the Windy City should get very excited.