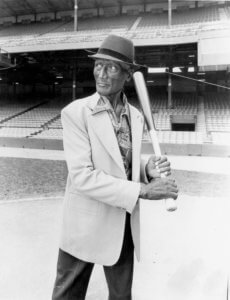 Norman “Turkey” Stearnes poses at Tiger Stadium in the 1970s, long before the former Detroit Stars outfielder was inducted into the National Baseball Hall of Fame.

OK, so we have talked about Pete Hill and Andy Cooper recently as two of the legends who played with the Detroit Stars in the Negro Leagues, and are also inducted in the Baseball Hall of Fame.

Norman “Turkey” Stearnes was one of the most feared hitters in baseball history and he, not Josh Gibson, actually holds the record for most home runs in league games in the history of the Negro Leagues.

But Stearnes, because of the color of his skin, and later brush offs by the Tigers, is not remembered as well or as much as he should be. He is not given his due.

Most Tiger fans have never heard of Stearnes, despite the awesome nickname.

While other Negro League Stars have statues at major league parks, like Josh Gibson (in Washington D.C.) and Cool Papa Bell (St. Louis), (and there were eight in Pittsburgh, including Gibson and Satchel Paige until they were sold … but that is another story), Stearnes is not so depicted at Comerica Park in Detroit.

But while baseball as a whole has the reputation of being ahead of the times racially, many of the teams lagged behind. The Detroit Tigers was the second-to-last team to integrate—more than a decade after Jackie Robinson blazed the trail of integration in 1947.

[bctt tweet=”The Detroit Tigers need to put up a Turkey Stearnes statue alongside the rest of the Detroit legends—where he belongs.” username=”detroitathletic”]

And the Tigers’ first black player—Ossie Virgil, who joined the Tigers in 1958—was Dominican, not actually African-American.

The ball slowly got rolling after that, and the Tigers have had many black stars—Jake Wood, Earl Wilson, Willie Horton, Lou Whitaker, Chet Lemon, Cecil Fielder, Prince Fielder, Gary Sheffield and Curtis Granderson.

But one of the most backhanded slights involving the Tigers is something that continues today.

The Tigers honor their former players who have had their numbers retired or been elected to the Hall of Fame on Comerica Park’s center field wall.

How about Stearnes, one of the best players in Detroit history, who didn’t play for the Tigers only because the color of his skin barred him from joining the majors?

There is a small plaque honoring Stearnes (tucked away outside the stadium near the center field entrance).

Apparently no one from the Tigers noticed what an unbelievable and ironic slight that is can be defined as nothing less than outrageous.
Stearnes is one of the top 100 players ever to play the game of baseball, but just like during his playing days with the Detroit Stars, he can’t get his just due inside the park.

Usually it works the other way around, but Stearnes was somehow given the ultimate honor in his sport before his own state even recognized him.

The Tigers, who have had a long and shaky history with race relations, aren’t doing what they should be doing to show they are above it—especially in a diverse city like Detroit.

They need to put up a Stearnes statue alongside the rest of the Detroit legends—where he belongs.

If they don’t want to go that far because he wasn’t a Tiger, there are plenty of ways to make the situation better. How difficult would it be to put his name on the other side of center field next to George Kell’s? That is where the Hall of Famers who don’t have statues are. It wouldn’t be a big deal or cost anything really to paint the names of Stearnes, Pete Hill and Andy Cooper, who all played for the Stars, on that side.

But at bare minimum, at least move the Turkey Stearnes plaque inside of Comerica Park where it belongs.

It is ludicrous that in today’s era of racial relations and knowledge of history that a legend as great as Stearnes could still somehow be on the outside looking in.